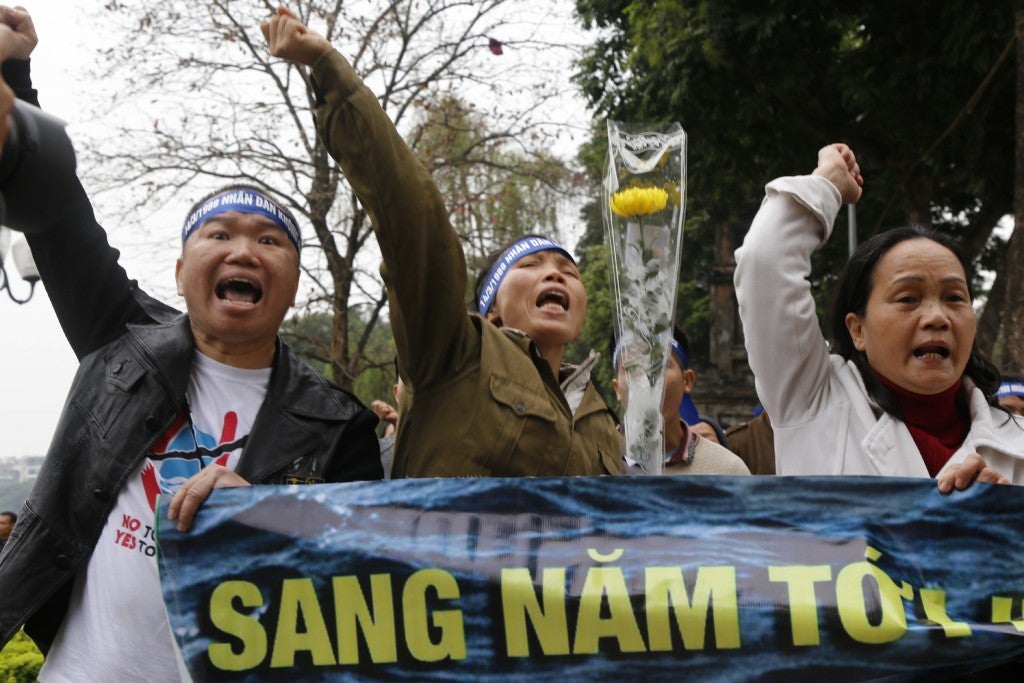 Vietnamese shout anti-China slogans during a protest in Hanoi, Vietnam Monday, March, 14, 2016 as about 200 Vietnamese gather to remember 64 Vietnamese soldiers who were killed by the Chinese navy in a clash 28 years ago in the disputed South China Sea. AP

HANOI — Activists chanted anti-China slogans in the Vietnamese capital on Monday to mark the anniversary of a 1988 battle in the Spratly Islands, a rare act of protest over an issue that has come to dog relations between Hanoi and Beijing.

The two neighbors are locked in long-standing territorial disputes over the Spratly and Paracel Islands, which both countries claim.

One party Vietnam clamps down on public protest.

But anti-Chinese demonstrations have become increasingly commonplace, particularly around the March 14 anniversary of a skirmish between China and Vietnam.

In 1988 China launched an attack on Gac Ma Island — one of the larger Spratly Islands which was formerly under Vietnamese military control — killing 64 Vietnamese soldiers in the last violent conflict between the two nations.

“We are here to commemorate our soldiers killed by Chinese,” teacher Pham Toan told AFP in front of a statue of Ly Thai To — the founder of Hanoi and a nationalist figurehead.

“Their sacrifice has been long forgotten by Vietnamese authorities,” Toan added, referring to activist claims that the communist authorities do not sufficiently commemorate the battle.

Vietnam’s communist leadership’s handling of its delicate relationship with China — which is the country’s largest trading partner — is a frequent flashpoint for domestic criticism of Vietnam’s authoritarian government.

Dozens of activists laid floral wreaths covered with black ribbons that read “the people will never forget” at the statue of Ly Thai To.

The protest lasted about an hour. Vietnam’s tightly controlled state media covered the anniversary but not Monday’s protest. There was no official comment from the government.

Beijing’s increasingly assertive stance in contested waters has triggered public anger and rounds of protests in authoritarian Vietnam where the demonstrations are sometimes forcefully broken up.

The Spratlys are claimed by Hanoi but controlled by Beijing, which has ramped up activity in the area by rapidly building artificial islands, including airstrips said to be capable of hosting military jets.

Rioting broke out in Vietnam after Beijing sent an oil rig into contested waters in 2014, and at least three Chinese people were killed.

Apart from China and Vietnam the Spratly Islands are claimed in whole or in part by the Philippines, Malaysia, Brunei and Taiwan.