Palace: Alleged North Korean ship to stay at Subic port while under probe 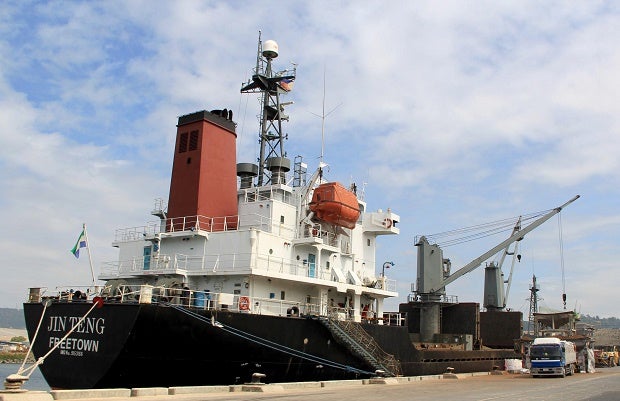 Malacañang on Tuesday said the M/V Jin Teng, a suspected North Korean cargo ship, will remain at the Port of Subic in Zambales while the investigation required by the United Nations (UN) Security Council is ongoing.

“We have been informed by the Department of Foreign Affairs (DFA) that an inter-agency meeting was convened yesterday at the initiative of the National Coast Watch Center to discuss further actions,” Communications Secretary Herminio Coloma Jr. said in a Palace briefing.

“It was decided that the Coast Guard will continue to hold the vessel at port until the ongoing inquiry and investigation has been completed. It was also agreed that the crew may be allowed to leave if justified by the results of the investigation,” he explained.

A Subic Bay Metropolitan Authority official earlier reported that the MV Jin Teng has been impounded by the Philippine Coast Guard based on an order by the DFA, which enforced a new UN sanction against North Korea for its decision to push through with a nuclear test and a recent missile launch.

Asked if the vessel has been fully inspected, Coloma said “initial inspection” has been conducted.

“But they are still going on with respect to the full inquiry and investigation that the UN Security Council resolution requires,” he said.

No timeline has been released in connection with the inspection and investigation.

“Our main concern is that we are compliant with the UN Security Council resolution; and the UN is clear in its resolution on the items that it is interested in,” Coloma said.

He explained that the purpose of the sanction is to restrict movement of vessels and vehicles that may be used to transport equipment and armaments banned by the UN.

An earlier report said the ship carried a cargo of palm kernel expeller, which is an ingredient for farm animal feed.

The UN Security Council Resolution 2270 directs all member states to inspect cargo within or transiting through their territory that is destined for or from the Democratic People’s Republic of Korea. RAM