IS-inspired militants on offensive in Mindanao 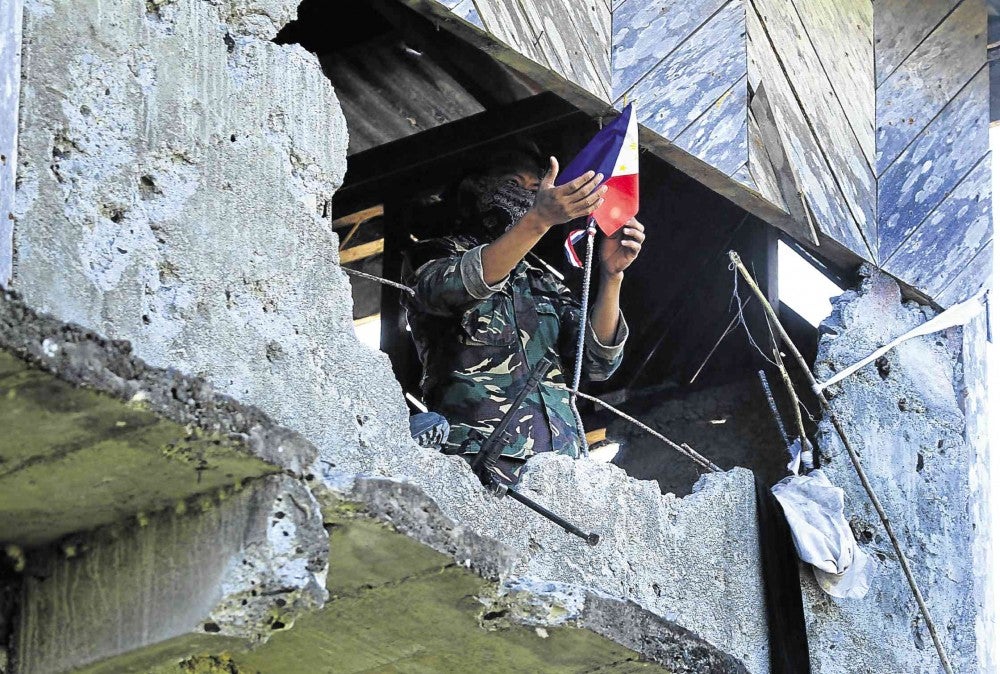 AFTERMATH OF TERRORIST ATTACK A week after gunmen waving black flags of the Islamic State (IS) group attacked a military outpost, a soldier stands before a Philippine flaglet tied to an exposed iron bar of a bullet-riddled house in Butig town, Lanao del Sur province. AFP

Militants fighting in the name of the Islamic State (IS) group are escalating attacks in Mindanao, analysts said, deepening fears for the volatile region after its main Moro rebel group and the government had failed to conclude a peace agreement.

Gunmen who have pledged allegiance to the jihadists controlling swaths of Iraq and Syria have instigated a series of deadly battles with the Philippine Army since Congress failed to pass the proposed Bangsamoro Basic Law (BBL) last month.

An assassination attempt this week on a visiting Saudi Arabian preacher who was on an IS hit list has raised the alarm further, although police emphasized they were yet to determine the gunman’s motives.

“Their influence is growing stronger and it is expanding,” Rodolfo Mendoza, a senior analyst at the Manila-based Philippine Institute for Peace, Violence and Terrorism Research told Agence France-Presse (AFP), referring to IS.

Mendoza said the various local groups that had pledged allegiance to IS were “planning big operations, like bombings, attacks or assassinations.”

Such violence has plagued large areas of the south for decades, as Muslim rebels have fought a separatist insurgency that has claimed 150,000 lives.

The violence has left the region one of the poorest in the Philippines, while allowing warlords and extortion gangs to flourish.

Many of the predominantly Catholic Philippines’ Muslim minority live in Mindanao.

But when Congress failed to pass the proposed BBL last month that would have granted autonomy to the region, the peace process was frozen.

But hardline groups opposed to compromise with the government have started to take advantage of the vacuum, as they sense an opportunity to raise their profile and prove their credentials to IS, according to analysts.

“There is an incentive if they show that they are a fighting force,” Zachary Abuza, a professor at National War College in Washington, who specializes in Southeast Asian security issues, told AFP.

In the most spectacular attack, a previously obscure group discounted by the military as a small-time extortion gang launched an assault on a remote Army outpost in Butig, Lanao del Sur province.

The attack triggered a week of fighting that the military said had left six soldiers and at least 12 militants dead, and forced more than 30,000 people to flee their homes.

The gunmen flew IS flags during the fighting, and bandanas with the group’s insignia were found when soldiers overran their base, a two-story concrete building, according to the military.

At the same time, about 100 kilometers away, soldiers were battling a bigger and much better known group that had previously declared allegiance to IS, the Bangsamoro Islamic Freedom Fighters (BIFF).

That fighting, which began about a week after Congress missed its deadline to pass the proposed BBL, has claimed the life of one soldier, according to the military.

The clashes are continuing.

AFP video footage on Tuesday showed rockets being fired from an Army helicopter, as well as troops in a cornfield firing mortars and carrying a wounded soldier on an improvised stretcher.

“If the government keeps dragging its feet on the peace process, this fighting will continue and more groups will be enticed to follow Isis,” he said, using another name for IS.

Abuza also said more attacks could be expected from other groups that have publicly pledged allegiance to IS in Internet videos over recent years.

These include the Abu Sayyaf, a group of Moro bandits notorious for kidnapping and beheading foreigners.

The violence has over the decades mainly been restricted to the south, many hundreds of kilometers from the capital.

But the Abu Sayyaf bombed a ferry in Manila Bay in 2004, killing more than 100 people.

Authorities have regularly said fears of growing IS influence on Filipino militants are misplaced.

They argue the militants are just criminals interested in money and not radical Islamist jihadists.

But Abuza said the ability of IS to provide money and other forms of support were key to its rising influence in the south, and not its violent brand of Islam.

“It really has nothing to do with ideology,” Abuza said “This is all about resources.” TVJ