Binay to fight for PH sovereignty, enter into multilateral agreement on disputed sea 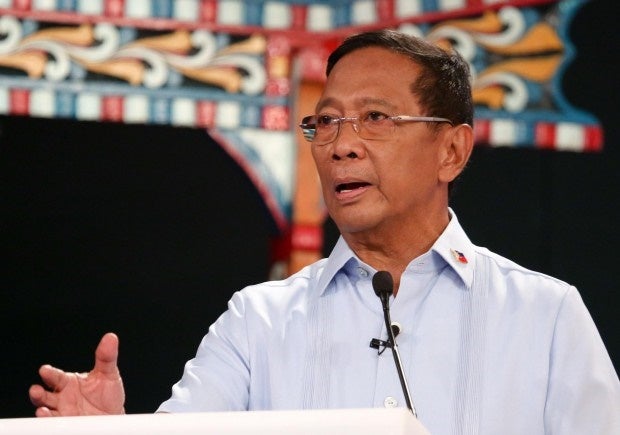 SAN RAFAEL, Bulacan—Vice President Jejomar Binay vows to fight for the country’s sovereignty amid the reported presence of Chinese fishing vessels at a disputed atoll in the West Philippine Sea, at the same time talk with the other claimants and enter into a multilateral agreement.

In a press briefing after the vice president’s campaign sortie at the gymnasium near the municipal hall on Thursday, his spokesperson Atty. Rico Quicho said an administration under Binay would fight for the sovereignty of the country.

Binay would also talk with other claimants in the West Philippine Sea and enter into a multilateral agreement with regard to the use of the resources in the disputed waters.

(Sovereignty is non-negotiable. We will fight for what is ours as Filipinos. Vice President Binay also believes that we have to be open to negotiations.)

(Vice President Binay believes that he can talk with the different claimant countries. VP Binay often says that countries involved must cooperate on a multilateral agreement so that more countries will have negotiations to strengthen assistance to economy.)

The Binay camp made the reaction after Chinese fishing vessels were seen stationed last week at Jackson atoll, a vast fishing lagoon frequented by Filipino, Malaysian and Vietnamese fishermen.

Chinese Foreign Ministry spokesman Hong Lei has admitted that China’s Ministry of Transportation dispatched ships to salvage a fishing vessel that had run aground near Jackson Atoll in the latter part of 2015. He said the Chinese ships persuaded fishing boats to leave the waters to ensure safe and normal navigation. The ships have already left.

Of all the presidential candidates, Binay openly supported opening bilateral talks with China and entering into a joint venture with the economic giant to explore oil and gas in the resource-rich contested waters because he said that the country needs China’s capital.

The Philippines claimed that it has full maritime entitlement in the West Philippine Sea and that China’s nine-dash line is invalid under the United Nations Convention on the Law of the Sea (UNCLOS) because it overlaps on the country’s exclusive economic zone (EEZ) and extended continental shelf (ECS).

The country elevated the case to the International Arbitration Tribunal governed by the UNCLOS. The tribunal recently ruled in favor of the Philippines because the case does not involve sovereignty or sea boundary delimitation. China has refused to participate in the arbitration.

Earlier, Supreme Court Justice Antonio Carpio, who is an advocate of the country’s claims, said it would be catastrophic if the next administration would withdraw the arbitration case.

READ: Withdrawing case vs China would be ‘catastrophic’—Carpio