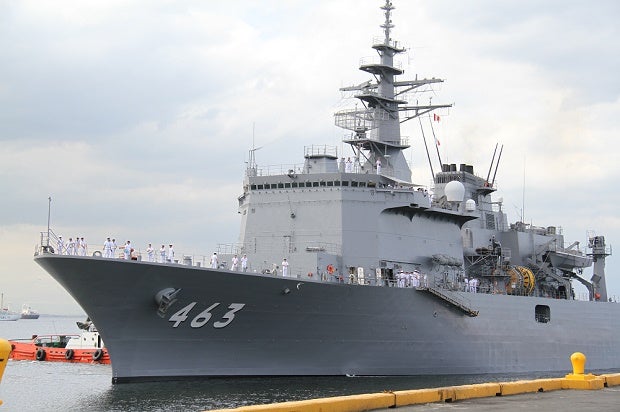 Japanese Ship Uraga (MST 463) sits at harbor at Pier 15 of the Port of Manila while on a goodwill visit. It is accompanied by the smaller JS Takashima (MSC 603). CONTRIBUTED PHOTO / PN NAVAL PUBLIC AFFAIRS OFFICE

Two warships of the Japan Maritime Self Defense Force Minesweeper Division 51 arrived in Manila on Wednesday for a three-day good will visit to the Philippines.

The two vessels —Uraga and Takashina — were under the command of Capt. Toshiro Takaiwa.

The visit comes amid the strengthening of defense cooperation between the Philippine and Japan. Early this week, the two countries signed an agreement for Japan’s transfer of defense equipment and technology to the Philippines.

A tour was given to personnel from the Philippine Fleet and Naval Sea Systems Command onboard the two Japanese ships.

The visit aims to enhance “the already strong relationship” of the Philippine Navy and the JMSDF and promote regional peace and stability.