RANCHO MIRAGE, California, United States — President Barack Obama and the leaders of Southeast Asia called Tuesday for peaceful resolution of the region’s maritime disputes as they concluded a summit in California.

Obama told a news conference that disputes must be resolved by legal means, including a case brought by the Philippines challenging China’s sweeping claims over most of the South China Sea.

China has refused to take part in the proceedings, but Obama said parties to the U.N. law of the seas are obligated to respect the ruling, expected later this year.

Obama has been hosting 10 leaders of the Association of Southeast Asian Nations, or Asean, in the U.S. for the first time. That sends a subtle message to China that the U.S. remains an important force in the region.

But the leaders’ joint statement after two days of talks avoided direct reference to China, reflecting the careful path that Asean members tread in their diplomacy with the world powers.

“Any disputes between claimants must be resolved peacefully through legal means such as the upcoming arbitration ruling under the U.N. Convention of the Law of the Seas, which the parties are obligated to respect and abide by,” Obama said.

China says it has a historical right to virtually all of the South China Sea and has built seven artificial islands, some with airstrips, to assert its sovereignty. Taiwan and Asean members Brunei, Malaysia, Vietnam and the Philippines also claim land features in these potentially resource-rich waters, an important thoroughfare for international shipping.

Though not a claimant, the U.S. has spoken out against China’s conduct and has angered Beijing by sailing U.S. Navy ships near some of the artificial islands to demonstrate freedom to sail there despite China’s territorial claims.

Obama said the U.S. will continue to fly, sail and operate wherever international law allows, and it will support the right of other countries to do the same.

The U.S. has long argued for the maritime rights issue to be resolved peacefully and is looking for Asean to take a unified stance on the issue.

The diverse group of countries includes governments that lean toward either Washington or Beijing. Only four Asean members are South China Sea claimants, leading to sometimes conflicting views on how to handle long-simmering rifts. 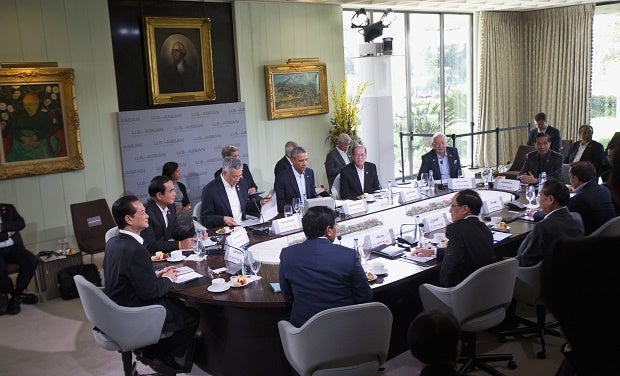 President Barack Obama participates in the second plenary session meeting of Asean leaders on Feb. 16, 2016, at the Annenberg Retreat at Sunnylands in Rancho Mirage, California. Philippine President Benigno Aquino III sits on the left of Obama, who hosted the Asean leaders. AP