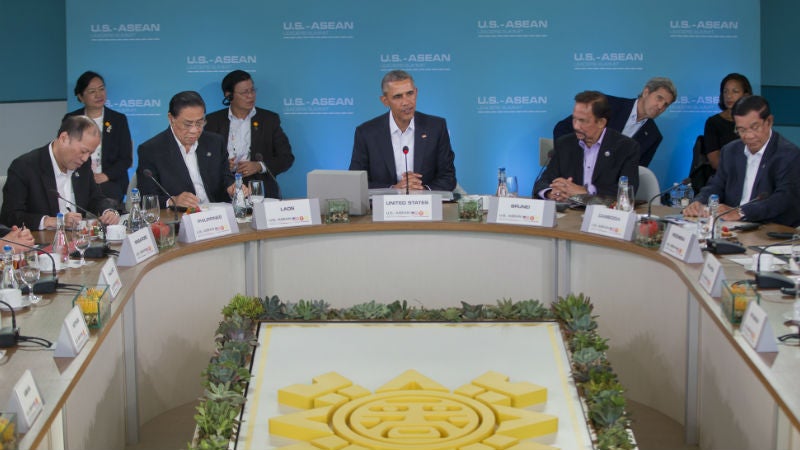 RANCHO MIRAGE, California—In hosting the first ever summit between the United States and the Association of Southeast Asian Nations (Asean) on American soil, US President Barack Obama wants to send a strong message to China as he hopes to form with the 10-nation bloc a united front against the Asian giant’s territorial ambitions.

“We do believe that it is important to send a message that we support rules-based order in the Asia-Pacific region in which disputes are resolved peacefully and the escalation of tension is avoided,” Ben Rhodes, US deputy national security adviser, told Southeast Asian journalists in a press briefing.

On Monday afternoon, Obama cited the central role of Southeast Asia in the US strategy in the Asia-Pacific region as he welcomed the Asean leaders to the unprecedented two-day summit at Sunnylands, a 200-hectare secluded retreat at Rancho Mirage in the middle of the California desert.

“Early in my presidency, I decided that the United States, as a Pacific nation, would rebalance its foreign policy and play a larger and long-term role in the Asia-Pacific,” he told the Asean leaders.

“Here at this summit, we can advance our shared vision of a regional order where international rules and norms, including freedom of navigation, are upheld and where disputes are resolved through peaceful, legal means,” he added.

Obama and Asean leaders will discuss on Tuesday a common response to a key UN court ruling on China’s island-building in the disputed South China Sea.

Washington, reckoning that Beijing does not want to be seen as a regional bully, has mustered an informal coalition of Asia-Pacific allies to demand that the latter respect the rule of law. Obama is seeking to secure a united front against China’s territorial ambitions.

A collective US-Asean endorsement of the UN court’s verdict—whatever the outcome—would heap pressure on China, which refuses to recognize the court. The UN court is expected to decide in April or May whether China’s claim to a vast expanse of sea inside a “nine-dash line” has legal merit

The United States and Asean “hope, if not immediately, then over time, the Chinese will not want to be isolated as an international pariah, a country that doesn’t agree with international law,” said Ernest Bower of the Center for Strategic and International Studies.

During the working dinner on Monday, US and Southeast Asian leaders were one in voicing concern over the continued militarization in the South China Sea, according to the Philippine Department of Foreign Affairs (DFA).

The leaders also expressed worry over “China’s unilateral attempts to change the status quo in the region through island building, construction activities and test flights,” the DFA reported. “In this regard, the crucial importance of freedom of navigation and overflight was highlighted.”

China’s moves in the South China Sea have prompted Manila to file a case challenging Beijing’s maritime claims in the UN court. China also has increased its military presence in these areas subject to myriad territorial claims.

The United States has been stressing respect for freedom of navigation in the region. Last month, the USS Curtis Wilbur sailed within 22.2 kilometers (12 nautical miles) off a disputed island chain, with a US official saying it was a “freedom of navigation operation” and intended to “challenge excessive maritime claims of parties.”

The summit comes as US and Asean officials report increasingly strong pushback from Beijing, which is using diplomatic and economic muscle to weaken criticism.

Officials say Cambodia and Laos—two Asean countries that have no claim in the South China Sea—are coming under particular pressure to break ranks. The two countries are the destination for large flows of Chinese investment.

“The message is ‘fall in line, or else,’” said one Southeast Asian diplomat. “China has leverage.”

But some analysts see signs that Chinese pressure is beginning to backfire—forcing Asean countries to turn further toward the United States. That is something Obama will hope to capitalize on at Sunnylands.

Even so, an editorial in the influential Chinese tabloid, Global Times, on Tuesday said the California summit was the wrong place to discuss South China Sea issues and that it would not yield “striking geopolitical decisions.”

“Asean countries have no such desire, and the US knows it is not able to do so,” the Global Times said, repeating Beijing’s stance that disputes in the sea should be handled bilaterally. With reports from the wires