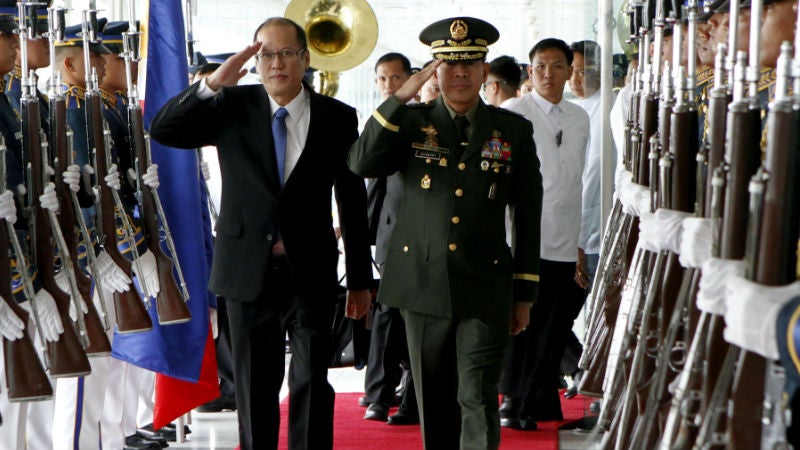 LOS ANGELES—Filipino-Americans have urged President Aquino to take up the cause of Filipino veterans with US President Barack Obama, and assert Philippine claims to the South China Sea at a summit of US and Southeast Asian leaders here.

The President is attending the two-day Association of Southeast Asian Nations (Asean)-US summit that begins on Monday afternoon (Tuesday morning in Manila) at a resort oasis in California.

A handful of Mr. Aquino’s supporters, mostly garbed in yellow and bearing heart-shaped balloons, held a welcome rally and a motorcade near Los Angeles International Airport on Sunday afternoon.

Art Garcia, national coordinator of the Justice for Filipino American Veterans; Eric Lachica, executive director of the American Coalition for Filipino Veterans, and veteran Franco Arcebal called on the President to urge Obama to fulfill his promise to speed up the process of bringing family members of World War II Filipino veterans to the United States.

Responding to pressure from immigrant rights groups, the Obama administration announced a new policy in July last year to expedite this process. Filipino veterans, however, were still awaiting the promised guidance on the application process.

“It’s been seven months but the guidance hasn’t been released yet. That’s one of our problems. The veterans’ widows have been calling me asking for updates. I hope this issue gets addressed while we’re still alive,” said the 92-year-old Arcebal.

At the same time, Arcebal urged Mr. Aquino to “be brave” in defending the Philippine claims to the West Philippine Sea.

“We want to boost the President’s resolve to carry on the fight,” he said. “Veterans like us are getting annoyed. What they’re doing is invasion.”

China, which claims 90 percent of the 1.35-million square mile South China Sea, last year undertook rapid reclamation around at least seven reefs in Spratly Islands in the sea, based on satellite images. The Philippines, Vietnam, Malaysia, Brunei and Taiwan partly claim the sea.

“If there’s forever, then that would be President Noynoy,” Ganon said in her brief remarks at the rally on Century Boulevard, about half a kilometer from the international airport.

The welcoming party included the President’s second cousin Andrea Aquino and a few members of her family who are based in Anaheim, California.