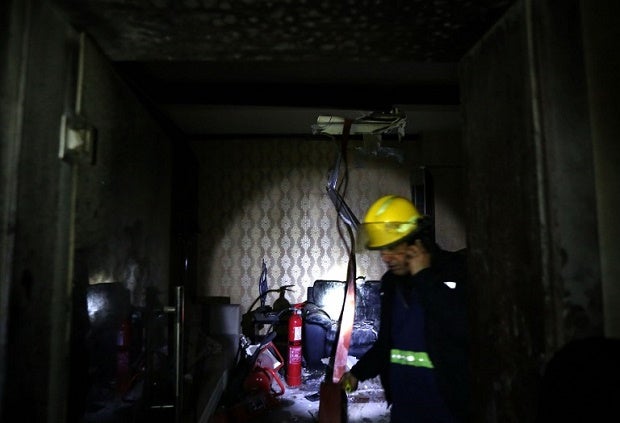 An Iraqi fireman works in a burnt room after a fire at the four-star Capitol Hotel in Arbil, the capital of the autonomous Kurdish region of northern Iraq, on February 5, 2016. AFP

The government of Iraq has condoled with the Philippines following the death of 13—not 14—Filipinos, all women, in a hotel fire in Irbil, capital of Iraq’s autonomous Kurdish region, a Filipino diplomat said last night.

Elmer Cato, chargé d’affaires at the Philippine Embassy in Baghdad, met with Nawzad Hadi, the governor of Irbil, and said the Iraqi official expressed his condolences over the incident and gave assurance of the “speedy repatriation” of the bodies of the 13 Filipinos.

“We are deeply saddened by this unfortunate incident that resulted in the loss of your citizens,” Cato quoted Hadi as telling him.

“We will extend all possible assistance to bring your people home,” Hadi said, according to Cato.

Cato also said Hadi told him that Iraqi President Masoud Barzani and Iraqi Prime Minister Nechircan Barzani were saddened by the deaths in the hotel fire and had ordered a thorough investigation.

Aside from the 13 Filipinos,  five others were killed in the fire that broke out Friday night at the 66-room Capitol Hotel.

Cato said the 14th victim was a man who was mistaken for a Filipino by authorities.

He said the 13 Filipinos all worked at the spa in the basement of the hotel.

Cato said the embassy had the names of the victims, but needed to match them with the bodies.

Authorities have concluded the fire was caused by faulty wiring in the sauna, he said.

The power went out, plunging the basement in darkness, and thick smoke made it impossible for the Filipinos to find their way out, Cato said.

“They died from smoke inhalation, according to the medicolegal report,” he said.

Cato said he and other embassy officials traveled to Irbil to identify the bodies and make arrangements for their repatriation. Christine O. Avendaño

Read Next
Gov’t girds for OFW crisis
EDITORS' PICK
Gilas out to prove Korea win not a fluke; Tab fires back at ‘lucky shot’ remark
Piolo Pascual: The Ultimate Heartthrob continues to level up
SANTIS Delicatessen: The road to survival is sweet and savory
LOOK: ‘Low vaccination’ turnout in 4 Manila sites after no walk-in policy
Internet: Overcoming pandemic lockdowns
Eleazar: PNP open to ICC probe but PH judicial process is working
MOST READ
Lacson or Pacquiao a possible presidential candidate for NPC – Sotto
Palace: Face shields no longer needed to be worn outdoors
Duterte to issue memo on face shields this week
DFA opening 10 satellite offices to boost passport services
Don't miss out on the latest news and information.