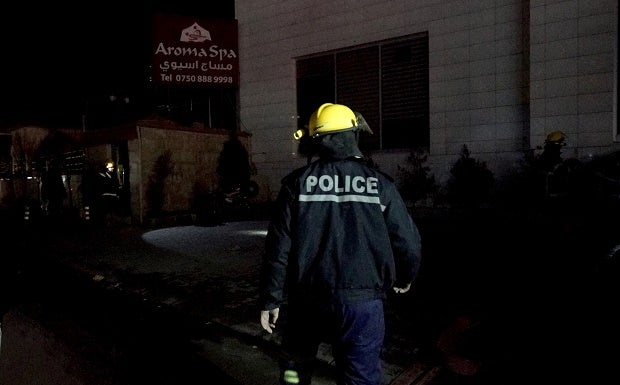 A police officer walks towards the scene of a fire in a hotel and adjacent massage parlor which has killed several people and injured others Frida, Feb. 5, 2016, in Irbil, capital of the Kurdistan region of Iraq. Nawzad Hadi, the governor of Irbil, said the fire broke out in the sauna of the Hotel Capitol at 4 p.m. on Friday afternoon. He said that 15 of the victims were identified as from the Philippines, three were Iraqis and one was Palestinian. AP Photo

A fire at a hotel in the capital of Iraq’s autonomous Kurdish region killed 19 people, 14 of them were Filipinos according to an official.

Also included in the fatalities were three Iraqis, a Palestinian and another person of unknown nationality, said Saman Barzanji, director general of the Arbil health department.

Dozens more were injured and taken to hospital in Arbil, said Fakher Harki, the department’s spokesman.

Nawzad Hadi, the governor of Arbil province, said preliminary information indicated that the cause of the fire was an electrical problem in a sauna.

The fire took place at the four-star Capitol Hotel where rooms cost from $100-$240 per night.

The hotel’s website says it has a 740-square-meter (2,580-square-foot) spa that includes saunas and a pool.

Photos and video posted on social media showed dark grey smoke pouring from windows on the top floor of the building.

The Kurdistan region in north Iraq has largely been spared the deadly violence that plagues other parts of the country.

The region is frequently visited by tourists from other areas of Iraq and various countries in the region.

A hotel fire in Sulaimaniyah, another city in Iraqi Kurdistan, killed 30 people in July 2010.

The city’s hospital said people from 12 different nations died in that fire, including some who jumped to their deaths from upper-floor windows while trying to escape the flames.