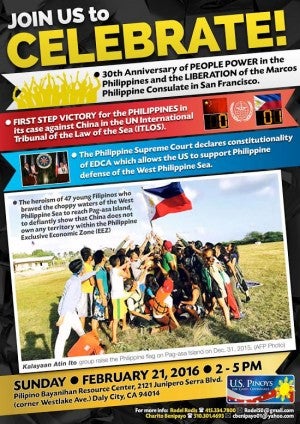 SAN FRANCISCO – Four historic events are being celebrated by Filipinos in the San Francisco Bay Area on Sunday, February 21 from 2:00-5:00 p.m, at the Pilipino Bayanihan Resource Center at 2121 Junipero Serra Blvd., Daly City.

First is the ouster of Ferdinand Marcos in February 1986, highlighted in San Francisco by the “liberation” of the Philippine Consulate. Also being celebrated are the Philippine victory in the first round of its territorial dispute with China, the Supreme Court ruling on EDCA allowing US forces to be stationed in the Philippines, and the heroism of the 47 young Filipinos who crossed a treacherous sea to reach Pag-Asa Island in protest of China’s encroachments in the region.

The public is invited to join the festivities.

The main event is the 30th anniversary of the People Power uprising that toppled the Marcos dictatorship. What will be particularly celebrated is the “liberation” of the Marcos Philippine Consulate on February 24, 1986 by members of the Ninoy Aquino Movement led by Atty. Ted Laguatan.

Soon after the peaceful occupation of the consulate, then San Francisco Consul-General Romeo Arguelles pledged his support for the new government of Pres. Cory Aquino.

“We want to celebrate the 30th anniversary of People Power but not just the largest event at Edsa but all the People Power events all over the Philippines and all over the world including San Francisco,” explained Laguatan.

Round One PH victory in Arbitral Tribunal

This victory sets the stage for the tribunal to hear the merits of the Philippines’ case. It will mean that China has no legal right to invade Philippine territories in the West Philippine Sea and install its seven military bases there.

Speaking on the significance of the ITLOS victory for the Philippines will be San Francisco Consul General Henry Bensurto, Jr. who previously served as the Assistant Secretary of the West Philippine Sea Center (WPSC) in the Philippine Department of Foreign Affairs. He was also the Secretary-General of the Commission on Maritime and Ocean Affairs Secretariat, a cabinet-level interagency coordinating body on the Law of the Sea and other maritime issues. He has been recognized for his ground-breaking work on Philippine maritime security and its territorial disputes within the West Philippine Sea.

“We have come together in protest actions against China’s invasion of the West Philippine Sea in the past, but now it is time or the community to come together to celebrate our victories,” said Rodel Rodis, president of the US Pinoys for Good Governance, which is sponsoring the February 21 celebration.

On January 12, 2016, the Philippine Supreme Court, by a 10-4 vote, held that the Enhanced Defense Cooperation Agreement (EDCA) is not a new treaty requiring Senate approval but an “executive agreement” legally signed by President Benigno Aquino III on April 28, 2014.

In his concurring opinion to the court’s ruling, Senior Associate Justice Antonio Carpio said that EDCA’s provisions allowing the prepositioning of U.S. war materiel and equipment in Philippine military bases would “give teeth” to the U.S.-Philippines Mutual Defense Treaty (MDT).

Speaking about EDCA at the February 21 celebration will be Perry Diaz, a syndicated columnist and editor of Global Balita and author of the essay, “EDCA: A New Strategic Partnership.”

In his article, Diaz reported that “China harshly criticized the Supreme Court’s backing of a defense pact allowing American forces, warships and planes to be based temporarily in local military camps, with an editorial in state media Wednesday, January 13, calling the move ‘stupid’ and warning of consequences.”

“With EDSA in place, a new strategic partnership between the U.S. and the Philippines is created; thus, providing a safety net for the Philippines to protect her sovereignty and territorial integrity,” editor Diaz asserted.

Also to be celebrated at the February 21 event will be the heroism of the group of 47 young Filipinos who arrived on Pagasa Island on December 28, 2015 in a symbolic defiance of China’s claim to the Kalayaan Island Group including Pag-Asa Island, which is populated by 250 Filipinos.

Members of the group, Kalayaan Atin Ito (Kalayaan is ours), charged that the government had not done enough to stand up to China, which seized seven reefs in the Spratlys and built artificial islands on them to bolster its claim to 90 percent of the 3.5-million-square-kilometer South China Sea, including waters close to the shores of its smaller neighbors in the region.

As the January 11, 2016 Philnews.com editorial heralded, “Let us all take our cue from the brave young men and women who sailed to Pag-Asa to let their countrymen and the world know that there are Filipinos who will not take China’s illegal aggression and intimidation sitting down. And no matter how weak or ill-prepared, they will stand proud and fight for what rightfully belongs to the Philippines, based on international law.”

A Power Point presentation of the heroic action of the Kalayaan youth will be presented at the February 21 celebration.

Food and drinks will be served at the 4 in 1 celebration. For more information, contact Rodel Rodis at 415.334.7800 or email [email protected].