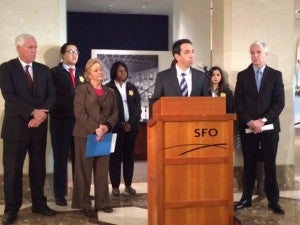 District attorneys from San Francisco, Santa Clara, San Mateo and Alameda counties banded together to ask the public to be on the lookout for signs of possible trafficking believed to increase dramatically during big events such as the coming 50th Super Bowl in the Bay Area.

The Super Bowl is expected to draw a million people to events in San Francisco and other main Bay Area venues particularly Santa Clara where the Levi’s Stadium is located.

San Mateo DA Steve Wagstaffe noted that human trafficking is a crime that knows no boundaries: “Traffickers will conduct their insidious conduct in all communities in our state, whether urban or rural, wealthy or poor and high or low crime rates.”

San Francisco DA Gascon believes that that recognizing the signs of human trafficking and reporting suspicious behavior would give voice to the victims. “Human trafficking is a form of modern-day slavery,” declared DA Gascon.

San Francisco’s victims services Unit Chief Gina Castro-Rodriguez said in an interview that trafficked and exploited victims include those who don’t have access to their own documents or their own money, are barred or not allowed to see people that they want to see, do not have freedom of movement or to speak freely, or don’t receive pay or not compensated enough, among others.

She said further that the undocumented need not fear reporting crimes because “we are not asking or looking for immigration status both in the prosecution and victim’s services side.”

“You have no reason to be scared for we are here to protect victims and help alleviate the problems that are coming from this crime. Feel free to get in touch with us at 850 Bryant St., San Francisco with email address [email protected] and phone number 415 5549044.”

DA Jeff Rosen, whose Santa Clara county’s human trafficking task force recently linked up with the Valley Transportation Authority’s (VTA) to use fleet of buses and a hundred rail cars as virtual billboards for their own awareness campaign.

From probably the most populous Bay Area county, DA Nancy O’Malley of Alameda County disclosed that they do have Filipino victims who have been fooled into both labor and commercial sex trafficking.

“We have one very big case involving 50 different victims some were from China, some were Filipina and they were all women and we were able to separate them away from the traffickers,” O’Malley revealed.

“We also see labor trafficking involving primarily women who come from the Philippines for work and think they are going to work in a legitimate business then put into working in a restaurant or in a nail salon or places like where they are not getting paid. They are also forced to live in poor conditions above the restaurant where everybody also stayed,” she added.

All Filipino victims that O’Malley and her team have seen so far are female, either in housekeeping, or in private homes, especially in care homes.

“They are among the women who come together to speak out about the victimization. They have been very brave because some of them are here without documentation, but they realize that they are being victimized and they are going to speak out for themselves and for others. They are courageous women who stepped up after they realized what’s happening is not right especially in assisted living homes, care homes and the like,” O’Malley asserted.

She also has Filipinas who work on her staff who have been very helpful in their outreach mission to Filipino community.

On lookout for more victims

“Although I have no knowledge of any Filipino victims, just the same, I feel that some of the victims are definitely in fear and are unseen, signs that we have not tapped enough into the community,” said Castro-Rodriguez.

“However, we know that the Filipino community is vulnerable as an immigrant community,” said Rosen.

“In fact, the person that created the poster that goes around Santa Clara county to raise awareness spent time in the Philippines where he saw instances of human trafficking that inspired him to make posters that highlight its dangers when he came to this country,” Rosen disclosed.

“It is a big plus that our prosecutor in charge of all our human trafficking cases is a Filipina, Paola Estanislao, who can also speak Tagalog,” he added.

In a separate interview recently, Deputy DA Estanislao hoped that unheard victims, including Filipinos, would come forward so that their cases could be acted upon.

“I hope to hear more feedback from Filipinos victims, including the undocumented ones, through conversations with the community.   What are the barriers that keep them from reporting and what can be done to break down the barriers? I can only make an educated guess that there is fear, hesitation, a cultural and/or language barriers that keep them from reporting,” Estanislao disclosed.

Estanislao explained that there are U and T visas that allow victims of human trafficking and violent crimes to stay legally in the country if they are being victimized. They can also get housing assistance, material support and mental services, among others, as needed.