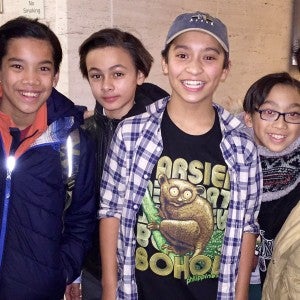 NEW YORK CITY—At 13 years old, Bonale Fambrini is serious about carving his dream of becoming a Broadway star. His terrific performance as Prince Chulalongkorn during the January 27 showing of “The King and I” at Lincoln Center in Manhattan is proof of this.

“If you ever book something big, whatever you do, don’t goof around on stage,” Fambrini, whose mother is from Iloilo, told INQUIRER.net in an interview after the show. “If you have stuff that you’re not directed to, don’t do it. When you’re on stage, don’t be a kid—unless you’re playing a kid— but don’t be a kid like you are on the outside.”

A rare milestone in Broadway history, “The King and I” musical has dozens of Filipino Americans playing as lead, understudy or ensemble. Fambrini has been swinging for fellow Fil-Am Jon Viktor Corpuz as Prince Chulalongkorn since September last year. He has played the character eight times now.

“I am getting the hang of it,” said the Filipino-Italian American understudy, who trained to speak with a Thai accent for the role and must not show any type of emotion on stage. “He’s [the Prince] always confused, it’s a puzzlement,” he said. “He always takes things to heart and his father doesn’t know stuff so that’s when everything gets intense.”

Meeting new people, experiencing new things and getting Broadway credits were Fambrini’s initial expectations for joining “The King and I.” But his perspective has changed since then. 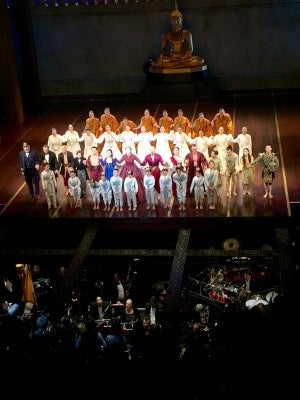 Cast of “The King and I” revival at curtain call, dozens of Filipino Americans play as lead, understudy or ensemble. ELTON LUGAY

“On stage, you must stop caring about everything that’s happening on the outside world,” he said. “You need to put everything on the side and be the new character that you are. If you want the audience to take you seriously, you need to be serious on stage, don’t do anything that will screw you up.”

Though “The King and I” is his first on Broadway, Fambrini is not new to the stage. His theatre credits include “Oliver!,” “Les Miz” and “Ragtime” among others.

Unlike his previous engagements, the Broadway stint involves some living and schooling adjustments.

His family lives in Fort Lee, New Jersey and had to rent a two-bedroom apartment close to the theater in midtown Manhattan. The rent is insane, his mother Junnette Fambrini confided during the interview. But it is worthwhile seeing her son get inspired to do eight shows a week. 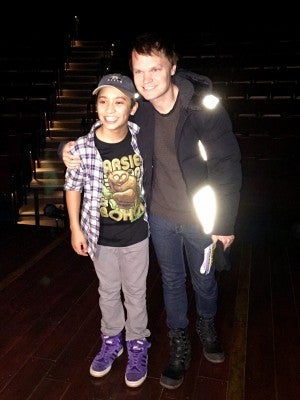 The eighth-grader Fambrini, who is being homeschooled for the first time, admits to missing his friends at school. When catching up with each other through text messages, some would tease him about being a superstar. But Fambrini’s daily grind, which starts later than other kids his age at 9 a.m., still involves homework either at 10 a.m. before taking a shower or backstage in between scenes. Luckily, there is also a play room in the theater.

“I miss school, I miss my friends a lot,” he said. “There’s a lot of people I want to see on a regular basis. Thankfully though, I’m surrounded by so many kids in the production, so I’ve made new friends, brothers and sisters.”

Fambrini looks up to Hoon Lee (who plays the role of King) as his “acting” model. “He has the attributes of a good actor that I would like to achieve. He is so good, he’s so into his character. Unlike other cast members who would smile at me or give me a wink during performance, Hoon is very serious and I think I like that in him,” he said.

Fambrini is joined in the production by three other Fil-Am teenagers: James Ignacio, who is part of the original revival cast and is also understudy for Louis Leonowens; San Francisco Bay Area resident Tony Boy Marin, who rejected two movie offers to pursue his dream career in theater; and newcomer Avery Oliver Espiritu.

Being the senior of the three of them, Ignacio said he has done over 300 “King” performances to date and is doing great as ever.

“It’s been amazing, I’ve met so many other people here,” he told INQUIRER.net. “All our ‘King’ just roll by every now and then and it’s nice that they come back to see us one more time before we go. What a great way to reunite.”

Working with fellow Fil-Ams also feels like being in one huge family with their many similarities, he added. 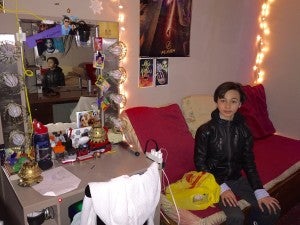 San Francisco-based stage actor Tony Boy Marin shares a dressing room with the “royal kids” of “The King and I” production. ELTON LUGAY

“Till the end, I hope. I’m excited to get to meet people who come in and out of this journey and I hope other artists get to experience this in their time,” he said. Espiritu goes to Holy Family School and hopes to become a world-famous actor one day.

Meanwhile, Marin didn’t mind the snowstorm that he and his mom Stelle got to experience last week.

“The snowstorm is able to make you feel more fun than nervous because you see something that you’ve never seen before, your mind just tells you to go have fun, it’s exhilarating,” he told INQUIRER.net.

The boy just turned 11 and sometimes feels overwhelmed. “[Everything] is happening right in front of me,” Marin said.”It’s amazing because I know my whole family and I have worked so hard to get to this point, so I feel really proud of what we have achieved.”

What is it like being surrounded by so many Broadway actors so far?

“Everybody is so nice especially the ‘wives’ [of King and I], they’re all awesome! People like Hoon [Lee] and Kelli [O’Hara], you don’t see them as award-winning people, you think of them as fellow actors that you work with. I also made friends already, all the kids are great. We help each other as the show must go on each night,” Marin said.

Read Next
SF Bay Area DA’s crack down on sex, human trafficking
EDITORS' PICK
Cherry Mobile teams up with Cloud Panda PH, launches online store
Someone from the Philippines can become $356 Million richer this Tuesday
Philippines’ COVID-19 cases accelerate to 18,638
Duterte certifies as urgent anti-terror bill
Leveling up your ‘lutong bahay’ with the kitchen companion you never knew you needed
‘Puno na lahat:’ Metro workers brave lack of public transport, rains on Day 1 of GCQ
MOST READ
‘If I had not been SolGen, I will make you eat your words,’ Calida tells Coco Martin
BFP raises general alarm over Mandaluyong fire
51 percent of German firms holding back investments in PH, but not because of COVID-19
5 car dealership outlets shutting down
Don't miss out on the latest news and information.