5 historic places to visit in PH 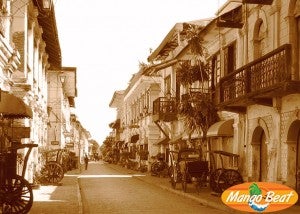 The Philippines has a rich history, being a melting pot of cultures and peoples. But where are some of the places that can help enlighten us about our country’s past?

Here are the 5 historic places in the Philippines that everyone should include in their travels:

One of the most important historical sites in Manila, Fort Santiago was Jose Rizal’s prison before his execution in 1896. Hundreds of lives were lost in this place during Spanish Colonial Period and World War II. Today, Fort Santiago is one of the major attractions in the Philippine capital.

Intramuros has an irregular outlin, following the contours of Manila Bay and the curvature of the Pasig River. It’s the oldest and the historic core of Manila. Built with defensive walls against foreign invasions, the Walled City has been through a lot, from the Spanish Colonial Period to World War II. It has been home to some of the oldest institutions in the Philippines like the Colegio de San Juan de Letran.

A small rocky island located at the entrance of Manila Bay, Corregidor was once the headquarters of allied Filipino and American forces who fought against the Japanese during World War II. You can visit old buildings and barracks that still stand to this day.

Recently recognized as one of New 7 Wonders Cities, Vigan in Ilocos Sur is famous for its cobblestone streets, intricate architecture and horse-drawn calash commonly known as kalesa. It’s one of the few Hispanic towns surviving in the Philippines, and the people have done a great job preserving the architecture and antiques that still look useable.

5. Shrine of Valor at Mt. Samat

Also known as the Mount Samat National Shrine, in Bataan, the Shrine of Valor is a memorial to all of the soldiers who died bravely in battle against the Japanese imperial forces or perished during the cruel Bataan Death March. The park was commissioned President Ferdinand Marcos, a war veteran himself, in 1966 and consists of a large memorial cross and a colonnade.

They say that past should stay in the past, but one can’t ignore the fact that history has a huge impact on the present.

Visit www.mangotours.com to know more about its latest promos and travel offers.