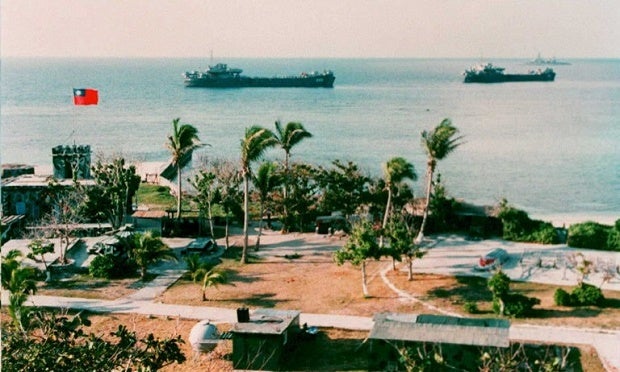 This photo released 21 April by the Military Information Agency in Taiwan shows two Taiwanese warships docking near the shore of Taiping Island, the largest of the disputed Spratly Island chain, with the Taiping military base in the foreground. AFP FILE PHOTO

Chu Mei-ling — the first Taiwanese citizen to register her residence in the Spratly Islands — has asserted the Republic of China’s claim in the South China Sea, the Coast Guard Administration (CGA) said Saturday.

“I want to declare Taiwan’s sovereignty. Taiping Island belongs to Taiwan,” she said.

Chu is a nurse who serves on Taiping Island, the largest of the Spratly Islands in the disputed South China Sea.

According to the CGA, Chu switched her household registration from Kaohsiung to the Spratlys on Jan. 21.

She said her motive for switching her household registration was to assert the Republic of China’s sovereignty over the South China Sea Islands.

In a program coordinated by the CGA and the Ministry of Health and Welfare, three nurses were contracted to provide medical care in a hospital on Taiping Island.

They are Chu, Pan Man-chi and Lin Fang-tzu, who hail from Greater Kaohsiung, Hualien and Pingtung, respectively.

The CGA said that Pan and Lin also intend to change their registered residence to the Spratlys when they return to Taiwan proper on leave.

Chu, who is originally from Greater Kaohsiung’s Zuoying District, is still a Kaohsiung resident.

As of Jan. 21, she has been a registered resident of Kaohisung Cijin District’s Nansha No. 1— the sole address on Taiping Island, which has an area of 46 hectares.

Chu said the Coast Guard inquired about her interest in making the switch last year and that at the time she had thought little of it.

It was only after the region’s territorial disputes that she decided to come forth and “let the international community know that Taiping Island belongs to its residents,” she said.

“Taiping Island belongs to Taiwan. I am a local resident,” Chu said, according to the CGA.

Chu stressed that she transferred her household registration because she loves Taiwan and had not been persuaded by any incentives or benefits.

Taiping Island is administered as part of Cijin District, and therefore the rights and responsibilities she holds are identical to those of any resident in Cijin District, she said.

When he was told that Chu had transferred her household registration to Taiping, he was “very surprised” and thanked her.

Hospital authorities said she would not be the only one to do so but only the first, according to the CGA.

Taiping Island is located about 1,600 kilometers from Greater Kaohsiung.

It is the southernmost territory under the control of the R.O.C.

China strongly condemns US for sending warship near island