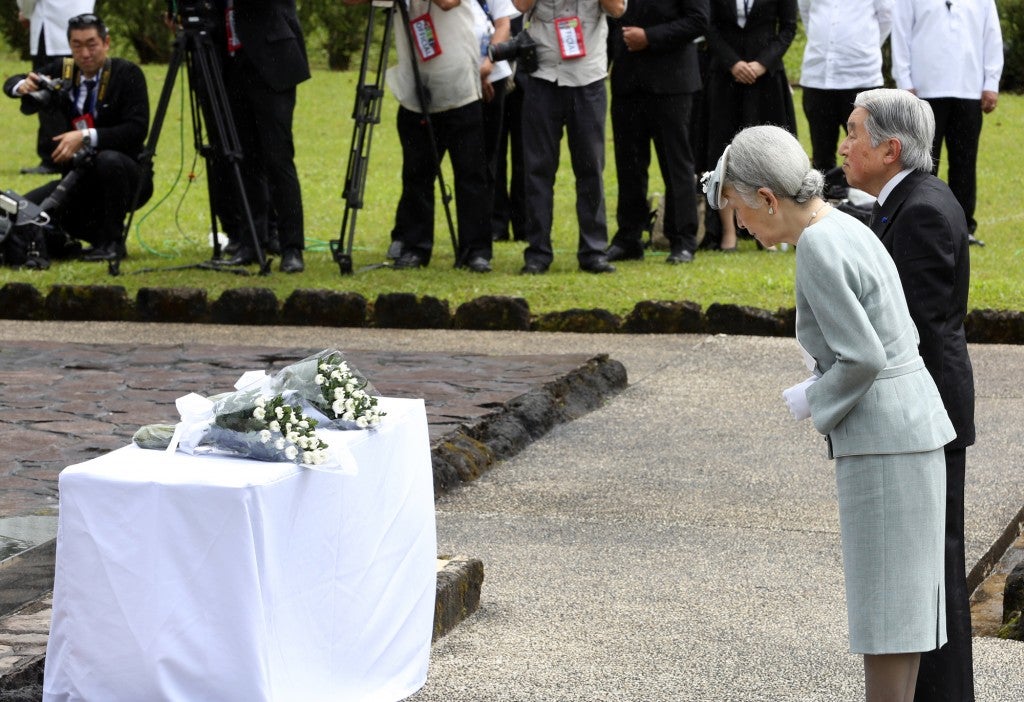 Japan’s Emperor Akihito and Empress Michiko offer flowers at Japanese Memorial Garden, Caliraya, Cavinti, Laguna province on January 29, 2016. The emperor and empress was in the country for five days to mark the 60th anniversary of the normalization of diplomatic ties between the two countries. NINO JESUS ORBETA

The Japanese imperial couple would have been the subject of selfies among the country’s rich and powerful at Thursday night’s dinner hosted by the Japanese ambassador to the Philippines.

But no, thanks, that would be against Japanese protocol.

Instructions were laid out moments before Emperor Akihito and his wife Michiko arrived at the residence of Japanese Ambassador Kazuhide Ishikawa at the posh Forbes Park in Makati City.

The couple are on a historic state visit which began on Tuesday.

Speaking on the microphone, Atsushi Ueno, deputy chief of mission of the Japanese Embassy, began his instructions with “Their Excellencies” to the guests in the hall of Kazuhide’s house.

“Only the press and the official photographers are allowed to take pictures here. So please refrain from taking photos with any device including a mobile phone,” Ueno said.

Japanese and Filipino journalists covering the reception were kept at bay by a cordon at a corner of the hall.

“Please turn off your mobile phones and set it on silent mode,” Ueno went on.

“Unless their majesties extend their hands, please refrain from shaking hands with them,” Ueno said, repeating it later to stress the point.

“Please do not present any gift to the majesties,” he said, drawing waves of laughter from the audience.

“Talk to the majesties only when they talk to you. Talk clearly and loudly,” he went on.

The last rule, he said, was: “Their majesties wish to have conversations with as many guests as possible. Please refrain from talking too long. Please stop trying to have a conversation again and again with their majesties.”

The emperor in a black suit and his empress in a brown kimono—the Japanese traditional garment—arrived with President Aquino and sister Pinky Aquino-Abellada at 7:11 p.m.

One by one, the guests went up to the emperor and the empress, as if according to their stature.  Former President Ramos went first followed by Drilon and Belmonte.

A bow followed by a handshake was the way to greet the emperor and the empress as the journalists saw.

Those seeking audience with their majesties had to line up and wait for their turn in an orderly fashion—not a typical sight during receptions for diplomats, businessmen and government officials.

Aquino and his sister left half an hour after with the royal couple seeing them off.

Without eating, the imperial couple left the reception shortly before 8 p.m. and headed to Sofitel Philippine Plaza Hotel, where they are billeted.

The Thursday night’s list of protocols showed how the Japanese revere the emperor, who lack executive and political power, and has remained a figurehead in Japan.

The emperor, called “Heavenly Sovereign” in the Japanese language, is Japan’s “symbol of the State and the unity of the people” as its 1947 Constitution states.