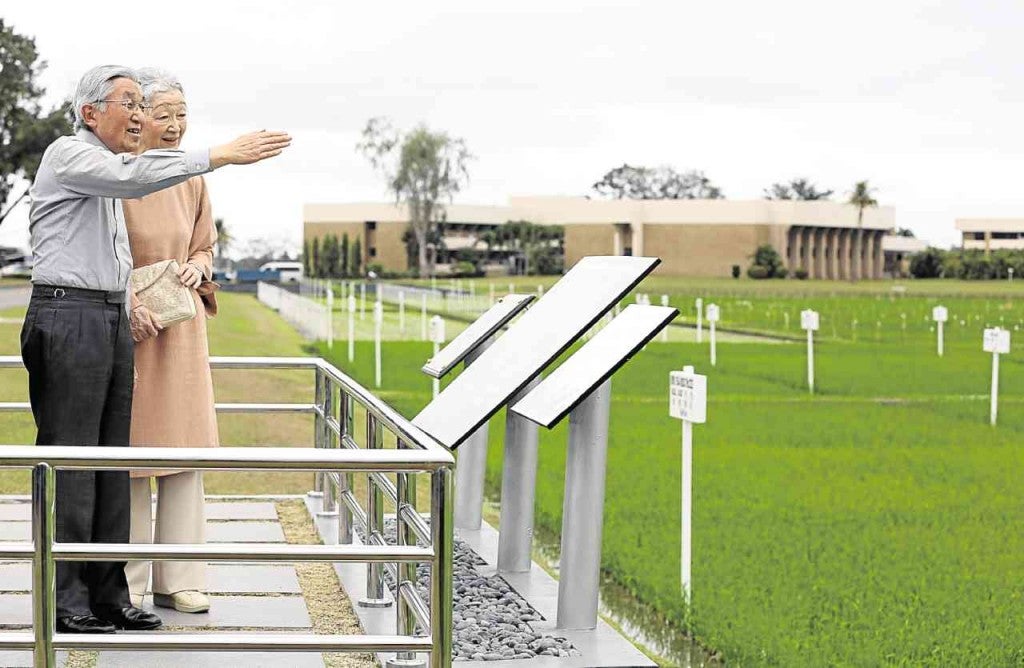 ROYALS VISIT IRRIJapan’s Emperor Akihito and Empress Michiko visit the world-famous International Rice Research Institute (Irri) where rare rice varieties are produced. The Japanese royal couple are in the country to mark the 60th anniversary of the normalization of diplomatic ties between Japan and the Philippines.

CAVINTI, Laguna—With a mournful bow, Japanese Emperor Akihito paid his respects on Friday at a hilltop war memorial in Laguna province to the largest number of Japanese invasion troops who died outside their homeland in World War II.

The sun shone after a morning drizzle as Akihito and his wife, Empress Michiko, solemnly walked toward the gray marble cenotaph at the Japanese Memorial Garden along Lake Caliraya, about three hours’ drive from Manila.

The 82-year-old monarch and the empress bowed twice and offered a bouquet of white chrysanthemums and silently prayed near the cenotaph.

Some of the 125 relatives of Japanese soldiers who witnessed the somber rites wept quietly.

The relatives traveled to the Philippines for the memorial service led by Akihito.

The imperial couple later spoke and shook hands with the relatives at the end of the half-hour ceremony.

Among the group were two war veterans and Akihito spoke to them.

“It is fortunate that you have survived the war and you are still here with us. Long life,” the emperor told Yoshikazu Morita, 90, who lives in southern Japan.

“I no longer want to remember the war. I have lived the last 70 years in peace,” Morita told Filipino journalists through a translator.

Morita was deployed to Luzon for a tour of one year and four months during the war.

Hatsuhisa Takashima, press secretary to Akihito, said the memorial garden did not yet exist during the first visit to the Philippines of the royal couple in 1962.

He said the imperial couple had expressly wished to visit the memorial garden.

The memorial garden is built on an 11-hectare property at the boundary of Cavinti and Lumban towns. It was built in 1973 under an agreement between the Philippine and Japanese governments.

The rain delayed the arrival of the royals at the memorial garden. They flew to the site on a Japanese Coast Guard helicopter.

Akihito and Michiko were winding up a five-day visit to the Philippines to celebrate 60 years of diplomatic ties as well as honor those who died during the Japanese occupation.

Akihito has made honoring Japanese and non-Japanese who died in World War II a touchstone of his near three-decade reign known as Hesei, or “achieving peace,” and now in its twilight.

He has previously traveled to other Pacific battle sites where Japanese troops and civilians made desperate last stands in the name of his father, Hirohito.

Tens of thousands of Philippine and allied US troops died marching to Japanese concentration camps or during confinement during Japan’s World War II occupation.

An estimated 100,000 Filipinos also died during the monthlong campaign for the liberation of Manila in 1945, which saw aerial bombings and artillery flatten the city.

‘We must never forget’

Akihito did not speak at Friday’s ceremony in Laguna. In his only public remarks related to Japan’s wartime aggression, he said at a banquet hosted by President Aquino in Malacañang on Wednesday that Japan should never forget the massive loss of lives in the war more than 70 years ago.

“During this war, fierce battles between Japan and the United States took place on Philippine soil, resulting in the loss of many Filipino lives and leaving many Filipinos injured. This is something we Japanese must never forget and we intend to keep this engraved in our hearts throughout our visit,” Akihito said.

The emperor has repeatedly expressed regret for the damage caused by the war, but has never offered a straightforward apology.

The furthest he has gone is to express “deep remorse” in an address last year marking the 70th anniversary of the war’s end.

Akihito’s visit to the Philippines this week is the latest in a series of foreign trips seen as an attempt to show his commitment to peace and remorse for World War II, when Japanese forces invaded and occupied Asian nations, committing abuses against conquered peoples.

Japan’s perceived failure to properly atone for its wartime actions has been a constant source of friction with China and South Korea.

But the Philippines has been much more accepting, partly because Japan has given it billions of dollars in aid.

President Aquino gave Akihito a red-carpet welcome and hosted a banquet for him and his wife on Wednesday.

“The state visit of their imperial majesties …. serves to strengthen the friendship between the Filipino and Japanese peoples as both nations mark the completion of six decades of harmonious relationship,” Presidential Communications Secretary Herminio Coloma Jr. said on Friday.

But Akihito’s visit has been marked by small protests by women forced to serve as sex slaves for Japanese occupation forces who are demanding a belated apology and compensation.

“The emperor’s visit to the shrine is improper. Their soldiers committed many crimes in our country,” Isabelita Vinuya, 84, told Agence France-Presse as she and nine other former sex slaves, now called comfort women, held candles outside the Japanese Embassy in Manila on Friday. With reports from AP and AFP