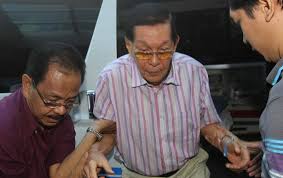 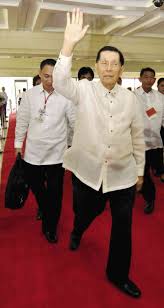 BIMINI, The Bahamas—Medical specialists based here are conducting extensive research and experiments on the case of an ailing Philippine senator who apparently sprang back to good health after being sprung from jail by that country’s Supreme Court.

Scientists at the Lilly & Putt Laboratories are amazed at the quick recovery of Senator Juan Ponce Enrile, who bounded from his sickbed in a detention center right into the Senate halls with no apparent difficulty.

Enrile was in jail facing corruption charges until a Supreme Court ruling freed him on bail on account of illness and old age.

“It seems to be a rare case of the even rarer Lazarus Syndrome of which medical science has yet to find a credible explanation,” stated Dr. Bill U. Leiter, director of research at Lilly & Putt.

Not only did Enrile make a grand entrance as a sprightly octogenarian, he even launched a highly publicized investigation into last year’s massacre of 44 police commandos, promising to unveil explosive “new evidence” of official culpability on the part of the current administration.

Although the evidence turned out to be a dud, scientists were left wondering whether supreme courts may now have an important though previously undetected curative role in the delivery of medical care.

“The syndrome is vaguely related to parthenogenesis, or the asexual reproduction in some animal forms,” observed Dr. Leiter. “In layman’s terms, pregnancy and birth with no sex involved.”

In Enrile’s case, he recovered quickly with no medication, surgery, physical therapy or rehab involved.

Dr. Handenfoote noticed that Enrile even lawyered in a Senate hearing for presidential candidate Jojo Binay, who is also facing corruption charges.

“If Vice President Binay becomes president and rewards him for his help by releasing him from jail with a presidential pardon, Senator Enrile may just find the fountain of youth—making him even healthier and younger. So young he may no longer need Viagra,” Dr. Handenfoote declared.

The Lilly & Putt’s research findings will be published in the Journal of Offshore Science and Medicine, N.A.

Read Next
40% of California 5th-graders are overweight or obese
EDITORS' PICK
Is your company a growth champion? Stand up and be recognized!
New Year, New Rediscoveries
More than 150 National Guard in Washington for Biden inauguration test positive for coronavirus
PNP’s Covid-19 cases jump to 9,809; 52 new infections logged
Pope Francis to miss events due to new flare up of leg pain—Vatican
Acer Philippines welcomes you to its first flagship store
MOST READ
Why Kris Aquino sleeps with her pearls
Parlade targets universities after fiasco with beauties
AFP to apologize to UP alum falsely included in list of NPA members — Lorenzana
Dustin Poirier knocks out Conor McGregor at UFC 257
Don't miss out on the latest news and information.