American gets 20 years for 1997 killing in Seoul | Global News

American gets 20 years for 1997 killing in Seoul 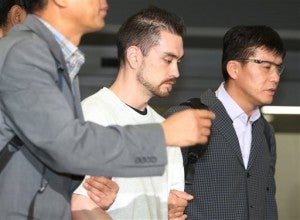 — A news report says a Seoul court has sentenced an American to 20 years in prison for fatally stabbing a South Korean university student at a Seoul Burger King restaurant in 1997.

Patterson was extradited in September, 16 years after he fled to the U.S.

Patterson’s American friend who was with him at the time of the murder was initially sentenced to life in prison for killing 22-year-old student Cho Choong-pil. He was later acquitted due to lack of evidence.

Patterson originally received an 18-month term for destroying evidence. He was later freed in a special amnesty and fled while authorities launched a new investigation.