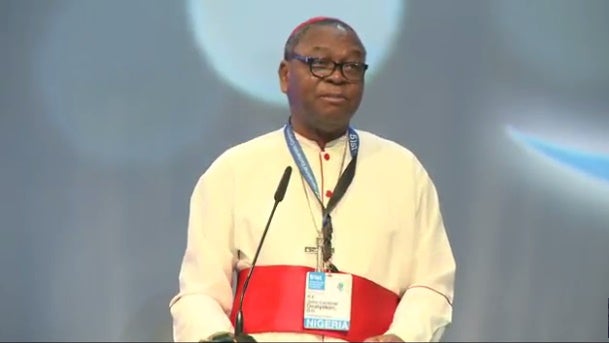 And like Lingayen-Dagupan Archbishop Socrates Villegas, president of the Catholic Bishops Conference of the Philippines, Onaiyekan apologized for the Church’s failings in helping the poor.

“Poverty is NOT inevitable,” said Cardinal Onaiyekan, archbishop of Abuja, Nigeria. “Rather, it is due to human failures, like bad distribution of earth’s goods because of injustice and greed.”

Cardinal Oswald Gracia, archbishop of Bombay, India, deplored hunger in the world which he traced to corruption and social injustice.

Saying that in South Asia alone, 276 people are “chronically undernourished, Gracias noted, “There is enough food in the world to feed everyone,”. However, the injustice lies in the improper distribution of food.”

The Indian prelate quoted St. Pope John Paul II: “One of the greatest injustices in the contemporary world consists precisely in this: that the ones who possess much are relatively few and those who possess almost nothing are many.

“It is the injustice of the poor distribution of the goods and services originally intended for all.”

On Thursday, speaking on how the Church can conduct intercultural dialogue, Cardinal Tagle said that while the Catholics should be open to engaging with “traditional and emerging cultures,” it should avoid culture that are “unacceptable” to Christianity, such as corrupt politicians who rob people’s money “for (their) parties and shopping.”

He added that elected officials should consider their election by voters as a “gift from people” and “guard (people’s money) as gifts and use them for social services.”

Onaiyekan warned that “the gap between the rich and the poor continues to grow.”

“This makes the misery of the poor more acute and unbearable,” the Nigerian prelate said. “as they live side by side with those who live in affluence or see the high living standards of the affluent in the mass media as unattainable utopia.”

Onaiyekan added the social discrepancy exists in both nation and Church.

“This discrepancy is not only between nations but also within nations,” he said. “What about within the church itself? We cannot say that our church is a perfect model of a just world.”

Onaiyekan urged Catholics to reflect deeper on the social significance of the Holy Eucharist, which refers both to the liturgical ritual memorializing the crucifixion and resurrection of Jesus Christ that Catholics must attend every Sunday, and to the Communion Host which symbolizes the body and blood ofChrist that they consume as food for the soul.

“The Eucharist stresses the goodness of God who gives himself to humanity,” said the Nigerian hierarch. “Jesus His son makes Himself poor so that we may be rich.

“The Eucharist stresses the need for sharing among God’s children starting from those in the church,” added Onaiyekan.

Some 15,00 delegates from 71 countries are attending the IEC which will close Jan. 31 in a High Mass that will be presided by Cardinal Charles Maung Bo of Myanmar, appointed by Pope Francis as his personal representative to the congress.

To show solidarity with the poor, first communicants, a staple event of the IEC since the spiritual festival started in the 19th century, will come from poor communities, said Cebu Archbishop and 51st IEC president Jose S. Palma.

In a press conference, Palma admitted that the Philippine should do “more coordinated efforts” to help the poor.

Ma. Georgia Cogtas, a rehabilitated street child who’s now a church volunteer in Cebu, said that the mass communion of poor children and young adults was “to make sure that the poor have a face in the International Eucharistic Congress.”

To lead the clergy in giving communion today will be Cardinal Ricardo Vidal, who was seven years old when he received his first communion during the 33rd IEC in Manila.

Meanwhile papal legate Cardinal Charles Maung Bo of Myanmar visited the Boystown, home of orphaned or abandoned kids and children rescued from the streets run by the Salesians of Don Bosco here.

Himself a Salesian, Cardinal Bo urged the boys to “be great for others.”

Earlier, Cardinal Bo, who was appointed by Pope Francis to represent him in the IEC, visited the inmates of the Cebu Provincial Detention and Rehabilitation Center.

“Your prayers are very powerful because God is very near to you,” he told the inmates. “So pray for all of us. Pray for a more peaceful Philippines.”