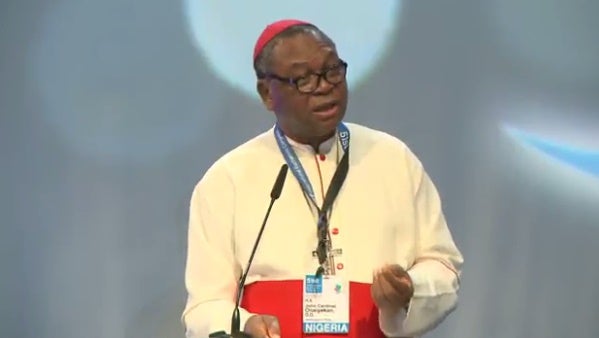 CEBU CITY—Nigerian Cardinal John Onaiyekan condemned Saudi Arabia for crucifying convicts as a form of capital punishment, saying that the practice disrespects Christianity aside from being cruel and inhuman.

He also condemned “terrorists,” apparently referring to the Islamic State of Iraq and Syria (Isis), for crucifying Christians “as a way of inflicting the greatest pain and degradation on their victims.”

Speaking before 15,000 delegates from 71 countries attending the 51st International Eucharistic Congress here, Onaiyekan, archbishop of Abuja, Nigeria, said there should be respect for religious symbols.

“In our modern day world, where a lot is said about respecting religious symbols,” Onaiyekan said, “is it not most terrible that some Islamic nations, for example Saudi Arabia, still practice the execution of condemned people by crucifixion, especially Christians, as a sign of the worst humiliation? “

“We have heard of violent riots and killings for alleged disrespect of the book of the Quoran,” he added. “Those who want their religious symbols to be respected ought to respect the religious symbols of others.”

But Onaiyekan also criticized Charlie Hebdo, the French magazine that lampoons Mohammad the Prophet and Islam.

In January 2015, the office of the satirical weekly was attacked by gunmen with ties to the Islamic State of Iraq and Syria and killed 11 of the staffers.

Pope Francis condemned the attack. “To kill in the name of God is an aberration,” he said.

But the Pope also later clarified that free speech has its limits and there should be respect of religion.

Onaiyekan, speaking on “The Eucharist and the Dialogue with the Poor and Suffering,” said the Eucharist, both the ritual that re-enacts  the suffering, death and resurrection of Christ, as well as the communion host symbolizing the body and blood of Christ that Catholics consume for spiritual nourishment, is a memorial to the crucifixion and sacrifice of Christ.

“The cross as an instrument of execution had existed before the time of Jesus and many people had been crucified before Jesus,” the Nigerian prelate said. “Since He died on the cross, what had been until then a symbol of a shameful death has become a great symbol of the glory of Christ in His glorious crucifixion.”

Onaiyekan noted that Isis extremists had used crucifixion to kill and wipe out Christian communities.

“Today, we hear Muslim terrorists crucifying Christians as a way of inflicting the greatest pain and degradation on their victims,” he said.

Onaiyekan was referring to the gruesome killings through crucifixion and beheading of Christians in Isis-controlled territories, including a 12-year-old boy last October.

“But the cross still remains the symbol of the victory of the Lord Jesus,” the Nigerian high church leader said.

“We can hope that the blood of the Christian martyrs so crucified will eventually be a source of salvation for even the perpetrators of such horrendous crimes. “

Charity and relief groups reported that thousands of Christians have been beheaded  or crucified by the Isis.

Last May, Pope Francis said he wept when he read the reports.

Onaiyekan likewise criticized discrimination in the Church, citing it as a form of “apartheid.”

“You cannot have a black church and a white church in the Catholic Church,” he said, to the applause of the delegates.

He also attacked poverty and social iniquity fostered by “the criminal injustice that seems to be ruling the financial and economic relationships in our world today.”

Onaiyekan added the IEC, as a gathering of rich and poor nations and different races and cultures should help the poor and victims of injustice.

“Can we celebrate the Eucharist together in this international Eucharistic Congress with all pump and pageantry and allow everybody to crawl back into our respective oases of poverty and misery, or affluence and indifference?” the prelate said.

Onaiyekan was later surprised by Cebu Archbishop and IEC president Jose S. Palma with a birthday cake. It was his birthday and he was turning 72.

Onaiyekan was later serenaded and gifted with a very faithful drawing of him made by a rehabilitated street urchin.