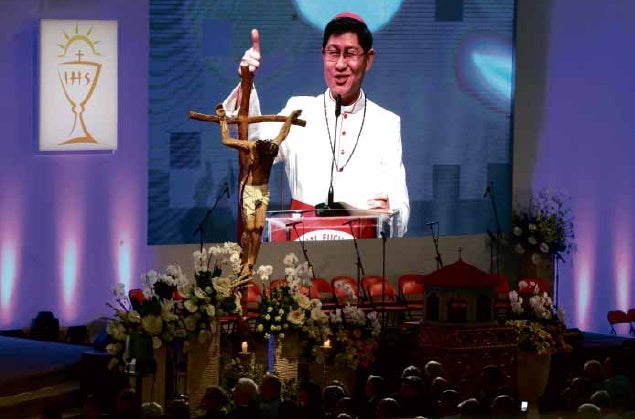 Speaking on the fifth day of the 51st International Eucharistic Congress (IEC) being held here, Tagle said materialism and individualism had skewed moral and social values, and there was a need to foster the “culture of giving and sharing.”

“Politicians, will you throw away people’s taxes for your parties and shopping or guard them as gifts for social services?” the prelate said.

While urging dialogue with “traditional and emerging cultures,” Tagle warned against dealing with people whose values were contrary to Christianity.

“We should avoid cultures with widespread acceptance but are incompatible with Christian values,” he said.

Lingayen-Dagupan Archbishop Socrates Villegas admitted that members of the clergy might have committed moral lapses like politicians.

Villegas, president of the Catholic Bishops’ Conference of the Philippines, asked for forgiveness for the Catholic clergy whose questionable acts might have alienated them from the faithful.

“Our parishioners, forgive us, your lost shepherds, and beg God to show us His mercy,” Villegas told 15,000 IEC delegates from 71 countries during the penitential service, a ritual that prepares Catholics before confession, at the IEC Pavilion.

“May the shepherd and the flock be merciful with each other,” he added.

In a press conference later, Tagle said bribery and corruption were “unacceptable” to Christianity even if they were acceptable practices in commerce and government.

“Bribing, corruption are not part of Christian culture,” he said.

The popular prelate explained that elected officials must not debase the trust reposed in them by voters.

“Being in politics means you have earned the trust of people when you were elected,” he explained. “You are given a gift of trust, so don’t throw away (that) gift.”

Referring to the IEC, a spiritual festival held by the Catholic Church every four years to discuss issues on how to better celebrate and appreciate the Holy Eucharist or Mass, the chief prayer service of Catholics, Tagle said politicians should observe “Eucharistic circularity.”

Referring to the Eucharist, or communion host that symbolized the body and blood—or sacrifice of Christ—that Catholics consumed as spiritual nourishment, Tagle said being elected in office should be considered a gift from the people.

“Eucharistic circularity” means politicians should show their gratitude to those who put them in office by selfless public service. “Show it (gratitude) through your service,” he said.

Tagle’s exhortation against corruption was made as the election season heats up.

Since a majority of Filipinos are Catholics and politicians are eager to court the biggest religious group in the country, there are fears that politicians would show up in the IEC.

Cebu Archbishop Jose S. Palma, president of the 51st IEC, said that while politicians were welcome to the congress, “politicking is not.”

On Sunday, when the congress opened with a High Mass at Plaza Independencia attended by some 350,000 people, Vice President  Jejomar Binay, a presidential candidate, received communion from the legate sent by Pope Francis, Cardinal Charles Maung Bo of Rangoon, Burma (Myanmar).

Cardinal Peter Erdo of Hungary contrasted the vitality of Catholicism in the Philippines with the dormant faith in former communist countries of Eastern Europe.

Delivering the homily for the High Mass on the fifth day of the IEC, Erdo noted that while there were many young people actively participating in the churches of Cebu, there was no  participation from young people in Hungary.

Erdo said the situation in Europe was correctly likened by Pope Francis in the latter’s address to the European Parliament in November 2014 in which he noted Europe’s “weariness and aging.”

The Pope likened Europe to a “grandmother, no longer fertile and vibrant,” pointing out that “the great ideas which once inspired Europe seem to have lost their attraction, only to be replaced by the bureaucratic technicalities of its institutions.”

Like the Pope, too, Erdo blamed materialism and individualism for the decline of Christianity in Europe.

Erdo said that during the rule of the communists, Hungarian fathers were made to choose by the Communist Party between keeping their jobs and renouncing their faith.

He said many chose to keep their faith at the risk of losing their livelihood because of their hope in eternal life.

“(We need to) trust in eternal life,” Erdo declared.