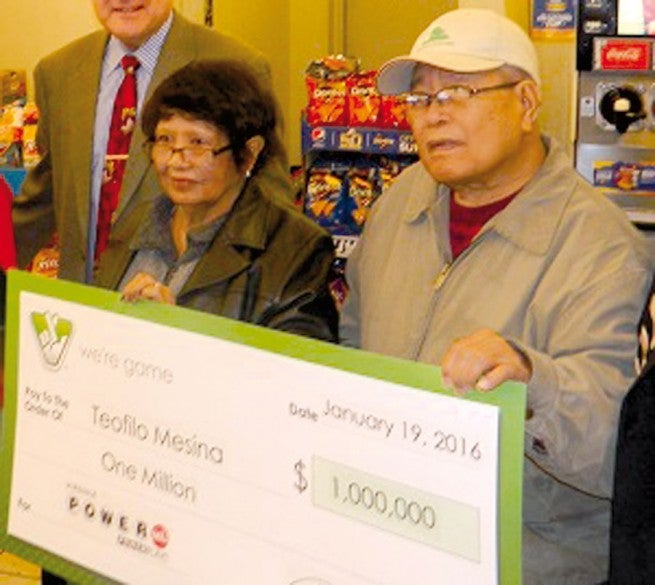 LOS ANGELES–While most people were closely watching the national Powerball lottery drawing live on television on Wednesday,  January 13, an 82-year-old Filipino man from Virginia Beach, Virginia was not one of them.

It wasn’t until he checked online that he realized he had a winning ticket.

Teofilo Mesina won $1 million – before taxes – from the record $1.5 billion jackpot, after correctly picking five numbers. He missed only the Powerball number.

“Not many people win that kind of money,” Mesina told The Virginian-Pilot on January 19, as he claimed his prize.

Mesina bought his ticket from a 7-Eleven at Lynnhaven Parkway and Salem Road in Virginia Beach.

“I would buy just sometimes,” he said. “I played a mix of my own numbers, and some computer-picked numbers.”

When Mesina looked at the numbers, he first thought he was misreading. He checked with his wife, Irene, then other family members to make sure he had won.

“I was shocked; I couldn’t believe it,” Irene Mesina said.

Including Messina, 72 ticket holders were $1 million winners — 12 of them from California. There were eight $2 million winners. More than 635 million tickets were sold for the drawing.

“I finally called my son when I realized the numbers matched,” he told Virginia’s WTKR News Channel 3. “The next day, I talked to a financial adviser so I can decide how to handle my winnings. I wanted to win the whole thing, but I’m lucky because I won a million!”

Three winning tickets in Florida, California and Tennessee will share the largest prizes in the $1.5 billion jackpot.

Wednesday’s drawing marked the first time a ticket matched all five numbers and the Powerball since the jackpot began on November 7 at $40 million. The pot had been rolled over 20 times before winners emerged during Wednesday’s drawing.

Mesina is retired from a sign shop where he had bent glass. After claiming his prize, presented by the Virginia Lottery’s deputy director Randy Wright, he told reporters that he didn’t have any plans yet for how he would spend the money, except to pay off his mortgage first.

As an occasional lottery player, Mesina is not done trying his luck.