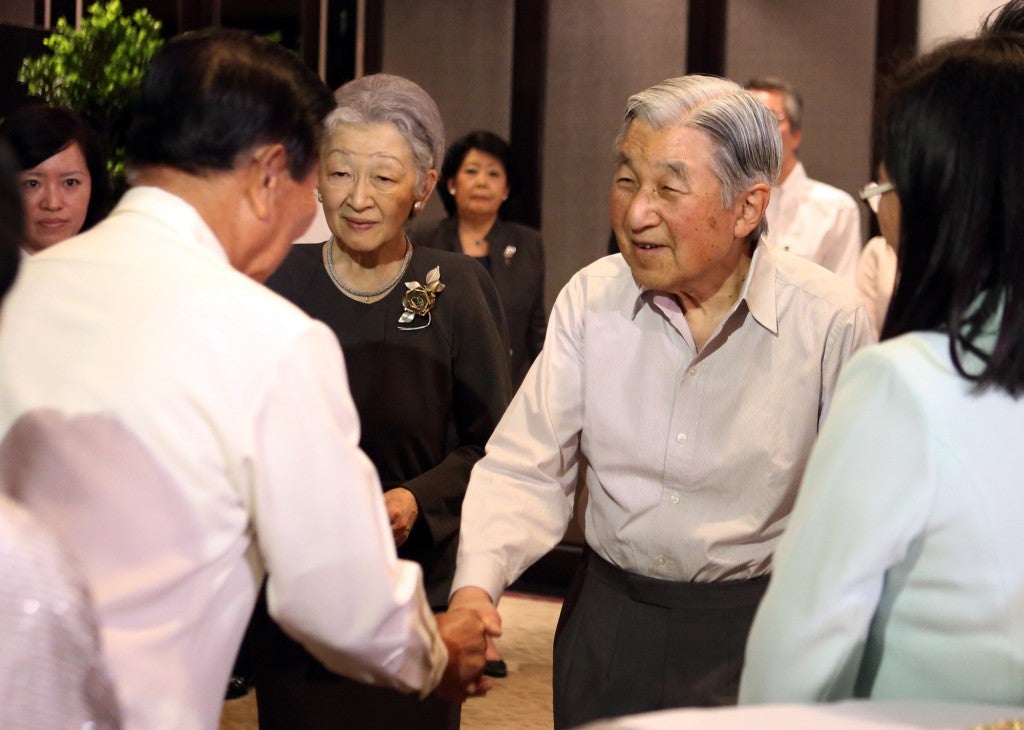 Japan’s Emperor Akihito (second from right) and Empress Michiko arrive at Sofitel Philippine Plaza in Pasay City on Thursday for a meeting with Japanese residents. The royal couple are in the country to mark the 60th anniversary of the diplomatic ties between Japan and the Philippines. NIÑO JESUS ORBETA

What would you like to do in Japan? In winter, Japan is very cold.

These are some of the things Emperor Akihito reportedly told around 15 caregivers and nurses studying Japanese at Technical Education Skills Development Authority in Taguig City on Thursday.

Hiroaki Uesugi, director of the Manila-based Japan Foundation, said some of the students who are set to leave in June and hopefully work in Japan under the Japan-Philippines Economic Partnership Agreement (Jpepa) forged in 2006 answered in Japanese that they wanted to go skiing, while others said they wanted to see the cherry blossoms.

Teodoro Pascua, deputy director general for Tesda’s technical education skills development operations, said the students were part of the more than 200 who are expected to complete their language training in April.

“After training here for six months, they have to go Japan, they will take a six-month language training again. Then train in the hospital again or caregivers’ house (there),” Uesugi said.

He said at some point, the Filipinos would have to pass Japan’s qualification exam for nurses and caregivers.

All throughout the brief exchange, the emperor and empress—who arrived past 3 p.m. at the venue and were briefed by Uesugi on the process under Jpepa—were smiling.

In some instances, the students would chuckle out loud.

“My impression is the students were a bit nervous at first but little by little, they became at ease because the emperor and empress were kind and always smiling,” Uesugi said.

After mingling with the students, the emperor and empress, who are in a state visit to the Philippines to mark 60 years of diplomatic ties, retired to the holding room, and minutes later, walked outside.

The emperor and the empress did not speak to reporters, who were also not allowed to take pictures during the visit.

The royal couple left around 5 p.m.

Emperor Akihito and Empress Michiko first visited the country during the time of then President Diosdado Macapagal. RC