I know that in a Pia Wurtzbach Universe, Filipinos would be everywhere watching Filipinos. But it’s just not that way in America.

Hard to believe given we’re so charismatic and talented and beautiful. But that’s how it works in showbiz in the U.S. Generally, we don’t show up.

That’s why we must make a big deal of the favorite son of Daly City’s Westmoor High — Vincent Rodriguez III as a Filipino American diversity trailblazer.

He’s showing up, and then some on The CW’s “Crazy Ex-Girlfriend.” And if you saw it on Monday, he’s still the lead male.

A generation ago, I shunned an acting career in favor of TV journalism because of a lack of roles. I couldn’t play the lead in a TV series, but on the local news I could be the lead simply by standing in raging flood waters and getting all wet.

Or from standing next to a five-alarm fire and risking smoke inhalation.

Rodriguez, on the other hand, is part of a new day, and a new headline. And now he gets the girl — of his choice.

I mean, when was the last time you saw a Filipino American male love interest on TV? Who is that SAG-AFTRA member named Never?

If the recent comic wave of “Fresh Off the Boat,” “Dr. Ken” and “Master of None,” has established that Asian Americans are back on Hollywood’s TV radar, “Crazy Ex-Girlfriend” (CW, Monday nights) has gone one step further for a broadcast network show. 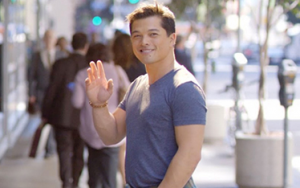 In a TV universe where Filipinos are hardly visible, the show has lifted Rodriguez to a new level: Rom-com hunk.

Not the driver, the cook, or indiscriminate minority guy No. 3.

Rodriguez gets the girl, rejects the girl, gets an even hotter girl, and then is pursued by somewhat less-hot girl (the “crazy ex-girlfriend).

That girl would be Rebecca Bunch, played by Rachel Bloom, the star, writer and co-executive producer of the show, along with Aline Brosh McKenna.

Considering Bloom’s recent victories at the Golden Globes and Critics’ Choice Awards for best actress in a comedy, she’s far from crazy.

Especially as to diversity and having Rodriguez’ Josh Chan as her Filipino Object of Desire.

In SMH parlance, that would acronymize into FOOD, and wouldn’t you know that’s what got me hooked on the show.

Filipino Thanksgiving is not much different from any other Thanksgiving, though if the turkey doesn’t have a roast pig as a companion, there is likely to be the entree of dinuguan.

Of course, you know it as that pork blood stew that’s cooked until the blood is thick and grainy, drenching little bits of pork butt, pork belly, and maybe sliced pig ears for crunch.

They ate it on the show. Another American Filipino first on network TV. And I have monitored these things ever since I watched JFK’s funeral on the family black and white TV.

Filipinos’ beloved dinuguan, a vegan’s high-cholesterol nightmare, a punch line on a network show! And in-language, not sanitized by referring to it as  “chocolate meat.”

You can see that show on this link: Happy Thanksgiving, indeed.

“Her plate legit had dinuguan on it, and each take the food would disappear,” Rodriguez said. “She told the prop guy to keep filling her plate. She said, ‘I’m going to eat it. It’s there. I’m hungry. I love Filipino food. I’m eating it.'”

Rodriguez explained that Rachel grew up in Southern California around Asians and Filipinos.

“Our show is normalizing Filipinos, but we were always here. We’ve just never had this kind of exposure,” Rodriguez said.

Rodriguez grew up in the San Francisco Filipino enclave of Daly City, the Northern California version of the show’s West Covina.

He said he got hooked on musicals watching “Newsies.” And then as a martial artist, he saw Gene Kelly and realized that dancing was a more “non-violent martial art.”

Now 33, (a fact that he somewhat regretted being public, although I reassured him as a Filipino, he will look 33 for the next 50 years), Rodriguez is on a show that has “heat” and is getting noticed. He’s auditioning for roles in movies and TV that would normally be cast with a white actor.

In fact, it was an issue he brought up with his bosses, Bloom and McKenna, at his audition.

“I asked them this question at my final call back,” he told me. “I said, ‘Why is it Josh Chan and not Josh Smith, or Josh Leibowitz? You could have very easily gone with some other white heartthrob…’ I was flattered to be there, but I also thought why am I here right now? Why did you guys make it this way? Because Aline and Rachel are head writers on the show. They’re both executive producers, and they both made this choice. And Aline was saying that she and Rachel both grew up in Southern California and of all the hot surfer bro types, there were definitely Asians among them just as hot as the white guys. So [they said] they wanted Josh to depict that because it was something they had never seen on television. And then after getting the job, Rachel admitted when she was younger she had some huge crushes on some Asian guy. She would go out of her way to go to the place where this guy worked, on the chance of seeing him.”

“It’s all based on truth and their upbringing and background and where they grew up. And after hearing that, I said, I grew up in my own West Covina, up north in Daly City. And I went to school with Josh Chan. I feel like I know who this person is. I actually feel like him. It feels like me.”

Rodriguez would seem to be a perfect match for Rachel/Rebecca.

But the show is not called “Crazy Ex-Boyfriend,” and something tells me a twist is coming. Or as they say in the proverbial “writers’ room,” things will be revealed.

In the meantime, there’s no guarantee for a new season, so the next few weeks are a test of sorts.

Frankly, I’m rooting for Rodriguez’ character Josh, and for the show.

In an odd way, I see myself as a Flip-side of the Rebecca character. I went from the west coast to the east coast to attend Harvard and date Jewish girls.

That didn’t quite work out either.

I’ve often said that when we all have a love interest in each other, diversity would simply happen and through our hearts work its way into our lives.

Ultimately, it did for me. But I can’t help but think of my dad when I see the show.

For Filipinos, who were called “lusty rabbits” and faced discrimination for interracial love when they first arrived in the 1920s and 1930s, it’s been a long time getting to “Crazy Ex-Girlfriend.”

Rodriguez told me they weren’t really aware of it when they were shooting the show. But the image of a Filipino family through Rodriguez’ Josh on “Crazy Ex-Girlfriend” is much more groundbreaking than anyone can imagine.

Good thing, he had the courage not to give up.

“A family member two years ago, when I was borrowing money, said I should consider another line of work in case the acting thing doesn’t pan out, because if I needed help, I couldn’t run to them anymore,” Rodriguez told me. “It was a very powerful member of my family, and that really shook me and made me very afraid to pursue what I wanted, knowing that it was going to be a dice roll.”

But he’d been in New York for more than a decade at that point, doing every odd job imaginable.

“I’ve scrubbed the dirtiest toilets; I’ve painted bathrooms, bars; I did what it took to survive in that city to do what I love,” Rodriguez said. “To pay for the dance class, the acting class, the seminar. My agent said I have a lot of perseverance and that whatever I have, they should bottle up. I just had this feeling inside–it’s not just about me anymore. I am Filipino. But I also love what I do. I’m very passionate about it, and that’s made me stand out in not always good ways. But I’m living my life happily and doing what I love. And not everyone gets to say that. Having this job is its own ultimate reward. But also rewarding is knowing that me being here means so much more to other people, and gives other people hope for our culture, and for where the entertainment industry is going.”

Rodriguez the actor is hopeful.

But even star and executive producer Bloom knows how hard it is to get a project produced. In her Golden Globes acceptance speech, she talked of almost not having a TV show.

“We made a pilot for another network, and they rejected it,” she said. “And we sent the pilot to every other network and we got six rejections in one day, and we felt like crap. But we knew it was good.”

Time for Hollywood to learn its lesson.

It if wants to tell the new stories that reflect the modern audience, it will need to pay more than lip service to diversity.

Emil Guillermo is a journalist and commentator based in Northern California. His book, “Amok: Essays from an Asian American Perspective,” won an American Book Award. http://www.twitter.com/emilamok