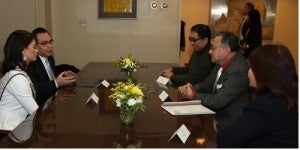 Consul General and Mrs. Mario De Leon welcomed Wurtzbach and engaged her in a discussion of her advocacies, namely HIV awareness, disaster relief and fight against cyberbullying. De Leon offered support and arranged her meetings with groups related to her causes.

In line with her HIV awareness campaign, Wurtzbach, accompanied by Miss Universe Organization President Paula Shugart, met with UNAIDS-NY who gave her vital information on the state of HIV-AIDS globally and gave inputs on projects that she can collaborate with. 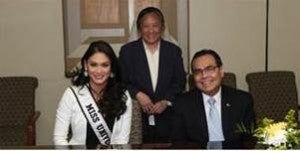 She sat down as well with Therese Rodriguez, president of APICHA Community Health Center, an organization providing medical and health assistance for underserved and vulnerable people, especially Asians and Pacific Islanders, the LGBT Community and individuals living with and affected by HIV/AIDS.

Leaders of Friends Indeed also consulted with Wurtzbach. It is a Filipino community charity organization that sends medical, humanitarian and relief missions to the Philippines especially in times of disasters, such as after typhoon Sendong in Cagayan De Oro.

To help elevate the presence of Filipinos in mainstream American society, Wurtzbach also met with the executive board of the Philippine Independence Day Council, Inc., in the hopes of planning her participation at the Philippine Independence Parade in June. PIDCI offered her a float at the Parade which she can use to project her advocacies and even speak before the audience.

A short press conference was held afterwards, with members of the Filipino American media inquiring about her love life, political inclinations, plans during her reign and her general outlook in life.