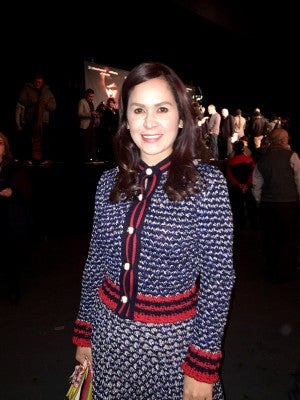 Jinkee Pacquiao: “I am happy to hear that my husband is retiring from boxing. Wala na siyang kailangang patunayan pa.” PHOTOS BY ELTON LUGAY

And if there’s one person who couldn’t wait to see the Pacman leave boxing for good, that would be his wife, Jinkee.

“I’m not sad [that he’s retiring], I’m happy, it’s an answered prayer for me,” the beaming Mrs. Pacquiao told INQUIRER.net in an interview after the Pac-Bradley presser Thursday afternoon, January 21 at Madison Square Garden in Manhattan.

“We’ve been praying for it ever since he lost to [Juan Manuel] Marquez in 2012,” Mrs. Pacquiao confided.

Jinkee Pacquiao, who is the incumbent vice-governor of Sarangani province, made clear that her husband’s decision to retire in April is very timely as “he is running for the [Philippine] Senate.”

Mrs. Pacquiao admitted that the eight-division world champion needs to focus as a public servant. “That’s what he really wants now. He’s already 37 after all. And wala na siyang dapat patunayan pa [he has nothing more to prove]. I have so much faith in him whether as a boxer, a politician or a husband,” she said. 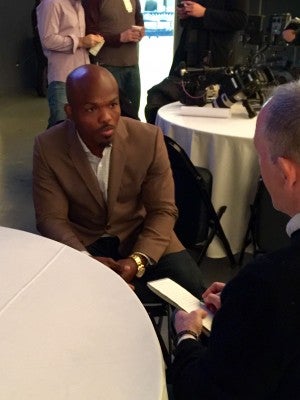 Tim Bradley: “He coulda picked anyone else, but Pacquiao likes to be challenged.”

In his speech during the press event, Manny Pacquiao said as much, but in a subdued tone. “It’s sad to say that this is my last fight, with Tim Bradley, and sad to say that after this, I am going to retire and hang up my gloves and focus on my big responsibility in life to help my people.”

Pacman is set to fight with Timothy Bradley in a 12-round WBO Welterweight Championship battle April 9 this year at the MGM Grand Arena in Las Vegas. This is their third face-off, and Manny Pacquiao said he couldn’t be more excited.

Bradley in much better shape

According to him, Team Pacquiao had heard about Bradley’s much better fighting shape, and it was a major reason for picking the WBO title bout.

“I chose Bradley to be my opponent kay challenging para sa akoa nga mas prepared na siya karon [because I find it challenging that he is better prepared now],” the Sarangani representative replied when interviewed by this reporter in Visayan.

Asked if anyone had influenced him to retire, he said: “Matagal na akong kinu-kumbinsi ng Mama ko at ng mga kamag-anak ko na tama na ‘yung boxing [My mother and other relatives have long been asking me to quit boxing],” he said. “Ang pag retire nako akong decision ni ug sa akong pamilya [My retirement is a personal decision along with my family].”

In his speech during the press event, Bradley thanked the Pacman “for choosing me and that goes to show you what type of fighter Pacquiao is, what type of man he is. He could beat anybody else, but Pacquiao always picks a challenge. He knows this is going to be a challenge”.

“I think this will be a tremendous fight,” he told INQUIRER.net. “I think Manny will see a new and improved Tim Bradley. It’s going to be a terrific fight. And I think if this truly is Manny’s last fight, he’ll be very proud of this fight.” 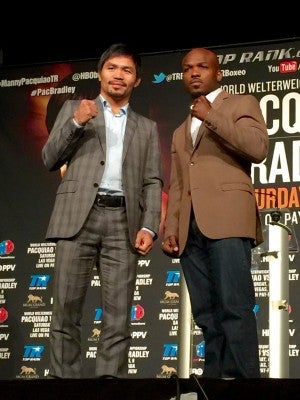 At the Madison Square Garden press conference for the Manny Pacquiao-Timothy Bradley fight this April in Las Vegas.

On whether winning or losing would still be a factor for Pacquiao, the Jewish boxing promoter said Pacman “is a competitor and he always wants to win with every bone in his body.”

In his introductory remarks during the event, Arum did not mince words in paying tribute to the legendary Filipino fighter.

“One thing we don’t realize as Americans is that if there’s one country in the world that’s most similar to the United States, it’s the Philippines— [from] their political system to the way people react. We really learned about the Filipino people, we learn[ed] about the great country of the Philippines and that is [in] no small measure [due] to Manny Pacquiao.

“He has been a tremendous, tremendous symbol of all that’s good in athletics, all that’s good in the Filipino people. And because of him, so many of us in this great country have a special place in our hearts for the Philippines. It’s great to see this case of a great boxer. We all can take pride in his accomplishments and how he has conducted himself. For me, it’s such a great pleasure to have known him,” he said in his speech.

In an interview with this reporter, Arum noted that he had nothing to do with Pacquiao’s decision to retire and was also delighted to endorse his political ambition.