To Fil-Am Republicans: Do you really want to be part of this? 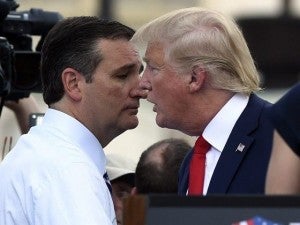 Twenty years ago, one of the biggest political questions in the United States was whether Colin Powell, the popular former U.S. general, was going to run for president and whether he would do so as a Democrat or a Republican.

He eventually announced that he wasn’t running for president as he ended speculation on his party affiliation: Powell, the son of Jamaican immigrants, declared himself a Republican.

In fact, he said he hoped to become an active member of the Republican Party, saying, “I believe I can help the party of Lincoln move once again close to the spirit of Lincoln.”

A year later, he again used that phrase, calling on fellow Republicans to “let the party of Lincoln be in the forefront, leading the crusade, not only to cut off and kill discrimination, but to open every avenue of educational and economic opportunity to those who are still denied access because of their race, ethnic background or gender.”

“It is our party, the party of Lincoln, that must always stand for equal rights and fair opportunity for all,” Powell said at the 1996 Republican National Convention.

It was when I read Doris Kearns Goodwin’s “Team Rivals: The Political Genius of Abraham Lincoln” that I really understood what Powell was talking about.

It may come as a shock to many that the Republican Party was once the most progressive and most courageous political movement in the United States. This was, after all, the party that led the struggle in eradicating what’s still considered the ugliest stain on American history: slavery.

Lincoln stands out in “Team of Rivals” as a skillful political strategist and a visionary leader with a big heart, who, even on a personal level, rejected the prevailing view (held by top Democrats of the time) that African Americans were subhuman.

Recalling his relationship with Lincoln, the African American leader and abolitionist Frederick Douglass, said, “He treated me as a man; he did not let me feel for a moment that there was any difference in the color of our skins.”

Fast forward 150 years and we have a radically different picture: The party of Lincoln is now the party of Trump.

Today, the most popular politician in the party of Lincoln is calling for a ban on all Muslim travel to the United States and appears to become even more popular in Republican ranks with every brazenly racist comment.

The party of Lincoln is now also the party of Ted Cruz who defended Trump’s comment on Mexicans by saying, “I don’t think you should apologize for speaking out against the problem that is illegal immigration.”

The last six months have been excruciatingly painful for anyone trying to follow and understand U.S. politics.

This Republican presidential primary season has been the nastiest and most mean-spirited campaign I’ve witnessed since I moved to the U.S. a quarter of a century ago. Last week’s Republican debate was simply mind-numbing.

Take one of the highlights of the evening featuring yet another one of Trump’s over-the-top fear-mongering rants. Asked if he’d consider rethinking his call for a ban on Muslims traveling to the U.S., he quickly answered: “No.”

“Look, we have to stop with political correctness,” Trump continued. “We have to get down to creating a country that’s not going to have the kind of problems that we’ve had with people flying planes into the World Trade Centers, with the — with the shootings in California, with all the problems all over the world. I just left Indonesia — bomb, bomb, bomb, bomb. We have to find out what’s going on.”

This is also a question Fil-Am Republicans should be asking: What’s going on? What’s happened to the party of Lincoln?

It was entertaining to watch, until one realizes that the debate featured leaders of a political movement that still exerts considerable influence on life in the U.S. and even the world.

Tough to disagree with New York Times columnist Frank Bruni who writes: “The only sane response was sorrow that this is a presidential election in the greatest democracy on earth, and that blowhards like Trump and Cruz are, for now, setting the pace and the terms in one of our two major political parties.”

Again to Fil-Am republicans: Do you really want to be part of this?