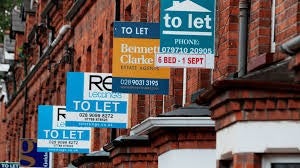 LONDON – As part of new “right to rent” government requirements beginning on February 1, England’s 1.8 million private landlords will be charged a £3,000 penalty unless they check whether their tenants or lodgers are documented immigrants and can legally rent their residential property.

Civil penalties will be issued per tenant living in a property with no right to rent in the UK.

The “right to rent” scheme began in the West Midlands last year. For all tenancies beginning on or after December 1, 2014, landlords and letting agents in Birmingham, Dudley, Wolverhampton, Walsall and Sandwell were required to monitor the immigration status of their tenants.

The trial resulted in one landlord being fined nearly £2,000.

Excluding tenants at accommodations such as social housing and care homes, landlords in England must check the nationality and visa status of anyone over 18 living at the property, whether named in the tenancy contract or not, within 28 days of their move-in date.

Landlords must check all adults living at their property, which includes viewing the original documents sanctioning the tenant to live in the UK, verifying the authenticity of the documents, checking that the visa is still valid and that information such as date of birth is consistent and making copies and records of the date that the documents were checked.

If a tenant sub-lets the property without the landlord’s knowledge, they are responsible for carrying out immigration checks on any sub-tenants. The tenant in question will be liable for civil penalties if the check is not carried out correctly.

With increased punishments for non-compliance proposed in an immigration bill, landlords may be faced with a prison sentence for making a mistake.

If there is a time limit on a tenant’s permission to stay in the UK, landlords will receive a civil penalty unless they make a further check either up to 12 months after their previous check, or before the expiry date of their tenant’s right to stay in the UK.

If a tenant does not pass a further check and can no longer legally rent property in England, landlords are obliged to inform the Home Office or receive a fine. Landlords can also evict their tenants.

Housing agents managing the property can carry out the immigration checks on behalf of the landlord, but need to have an agreement in writing.

Some have criticized the scheme as an “unfair burden” on landlords who may lack the skills or competency to carry out the immigration checks.

Town and Borough Councillor Cynthia Barker, a registered immigration adviser, said: “In practice, it is not an easy task for landlords to check the immigration status of their tenants. Different types of passports and visas can be confusing for them if they are not trained immigration lawyers.”

“Although there is an online Landlords Checking Service provided by the Home Office, there are challenges,” said Barker. “Some see the scheme as an unfair burden for the authorities to pass on responsibility to the landlords.”

“At times, a landlord’s decision may border on discrimination and they could potentially be sued under the 2010 Equality Act and face up to a £3,000 fine,” said Barker.

Since “right to rent” first rolled out, a number of concerns have been expressed about the ethics of the scheme. 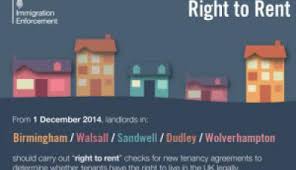 An analysis of the English Housing Survey by the Chartered Institute of Housing (CIH) showed that around 2.6 million adults entered the private rented sector in 2013 and 2014.

CIH chief executive Terrie Alafat said: “For many people, private renting is the only option, and if this is removed homelessness and destitution may follow.”

Councillor Barker expressed a serious concern for the wellbeing of the families of tenants, and the moral conflict that the landlord might be left with when faced with such a decision.

“In the case of overstayers whose visas expire during a valid tenancy or when a leave to remain application gets refused, how will one actually evict them knowing they have no right to rent elsewhere? What about the children?”

Barker added: “The responsibility of reporting tenants to the Home Office is a requirement, but the moral obligation as well as the legal duty can put a landlord and tenant into a traumatic dilemma.”

What does this mean for Filipinos in the UK?

The UK hosts the highest number of Overseas Filipinos in Europe. Based on a 2013 census, there are currently over 250,000 Filipinos living in the UK.

In light of “right to rent,” there is a risk that some Filipino tenants with expired visas or no right to live in the country might be reported by their landlords.

Barker said: “I have not yet met any Filipinos who have found themselves in a situation where they are being evicted because their [leave to remain] application has been refused and their leave has expired.”

“If this happens, they must provide their landlord evidence of a pending application or appeal for an extension of stay in the UK, or seek legal advice.”