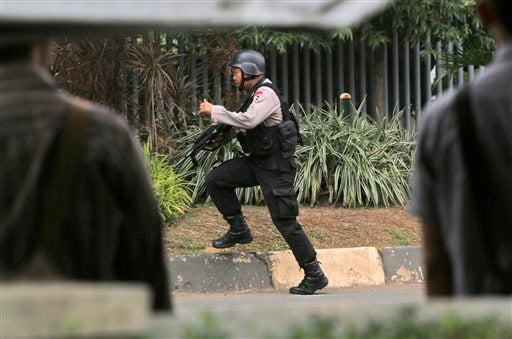 A police officer takes his position near the site where an explosion went off in Jakarta, Indonesia Thursday, Jan. 14, 2016. Suicide bombers exploded themselves in downtown Jakarta on Thursday while gunmen attacked a police post nearby, a witness told The Associated Press. Local television reported more explosions in other parts of the city. AP PHOTO

Malacañang on Thursday advised the public to be vigilant after multiple attacks killed several people in Jakarta, Indonesia.

“Government affirms the call of the AFP and the PNP for our citizens to exercise heightened vigilance in support of our security forces’ concerted efforts to address the threats posed by terror elements,” Communications Secretary Herminio Coloma Jr. said in a text statement.

At least seven people, including four perpetrators, were said to have been killed in an explosion in Starbucks on Thursday midmorning.

Indonesia has in the past suffered bombing attacks perpetrated by militant groups.

Malaysia and Singapore have raised their alert status and security measures following the recent attacks. IDL