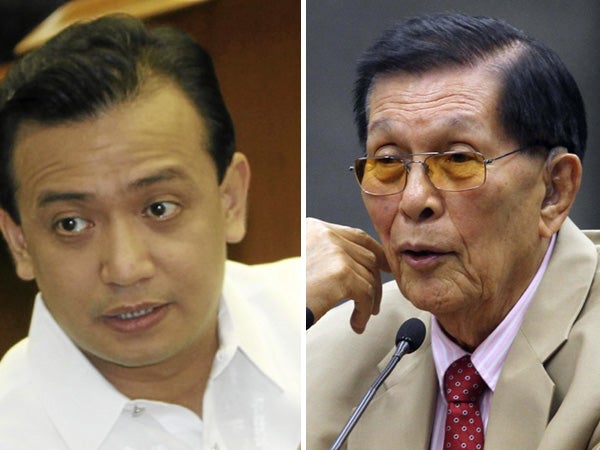 Senate Minority Leader Juan Ponce Enrile commended the Supreme Court on Wednesday for its “courageous” and “historic” decision when it upheld the legality of the Enhanced Defense Cooperation Agreement (Edca) between the Philippines and the United States.

(I will applaud the Supreme Court (for upholding the legality of Edca) because we have no preparation to secure this country.)

Amid the ongoing tension with China over the disputed West Philippine Sea, the senator said the Philippines has to ally with a “stronger power,” which is the United States.

“E sinampal na natin yung China, inumpisahan natin ng maanghang na usapan, e the worst that you can do to China based on the commentaries of experts and historians is make them lose face e ngayon mahirap mahilom yan,” said Enrile.

(We slapped China, we started the fiery statements, the worst that you can do to China based on the commentaries of experts and historians is make them lose face and now it is difficult to mend.)

“So what do we have to do? We have to act on our own. And since we can’t act on our own, we have to ally ourselves with a stronger power and that is America, that’s why sinabi ko kamakailan (I said recently), we must stay with America under our present condition to survive.”

(If we won’t ally with America, whom should we stick with?)

As such, Enrile said that the SC made a wise decision when it upheld the constitutionality of Edca.

“It’s a matter of necessity for us, and wisely the Supreme Court made a courageous decision in spite of public reaction to sustain the Edca in order to protect the Filipino people and this nation from possible enslavement for centuries by a giant power in Asia,” he said.

“That is a historic decision and in time, they will be proven right,” the senator added.

Senator Antonio Trillanes IV also applauded the SC’s decision, saying it validated his position that Edca does need not to be ratified by the Senate.

“But, more importantly, our country can now optimize the security opportunities this agreement has given us,” Trillanes said in a text message shortly after the high tribunal made the ruling on Tuesday. RAM

US Embassy in Manila welcomes ruling on EDCA constitutionality