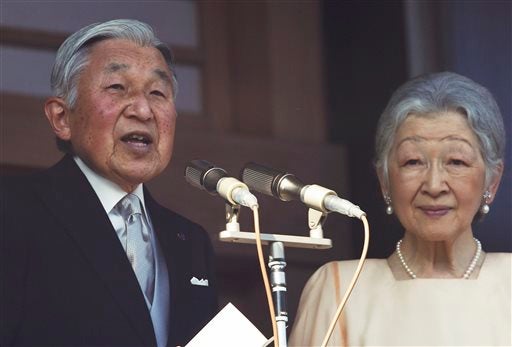 Japan’s Emperor Akihito delivers a speech to well-wishers from a balcony of the Imperial Palace as Empress Michiko listens during New Year’s public appearance in Tokyo, Saturday, Jan. 2, 2016. AP PHOTO

THE PHILIPPINES will welcome Japanese Emperor Akihito and Empress Michiko to the country on Jan. 26, the first of their five-day state visit, Malacañang announced Tuesday.

Presidential Communications Secretary Herminio Coloma Jr. called the Imperial Couple’s trip a “major highlight and fitting start” to the 60th anniversary of the forging of diplomatic ties between Tokyo and Manila.

In a statement, Coloma said that on Jan. 27 the Emperor and Empress will attend “activities in Manila,” including a welcome ceremony at Rizal Park where they will lay a wreath at the monument to National Hero Jose Rizal.

Later, they will call on President Aquino at Malacañang and be honored with a state banquet in the evening.

The Yomiuri Shimbun newspaper reported that on Jan. 28, the Emperor and Empress will meet with the Japanese-Filipino community, descendants of Japanese nationals who moved to the Philippines many years ago.

On Jan. 29, the Imperial Couple will travel to Caliraya, Laguna, to visit a monument to the Japanese war dead.

More than 500,000 Japanese soldiers and civilians died in the Philippines during World War II, the largest number outside the north Asian country.

Instead of a land trip, the Emperor and Empress will reportedly fly to Laguna on a helicopter based on a large Japan Coast Guard ship, the Akitsushima, that will be anchored on Manila Bay.

No official events are set for Jan. 30, the final day when they are scheduled to fly back to Japan.