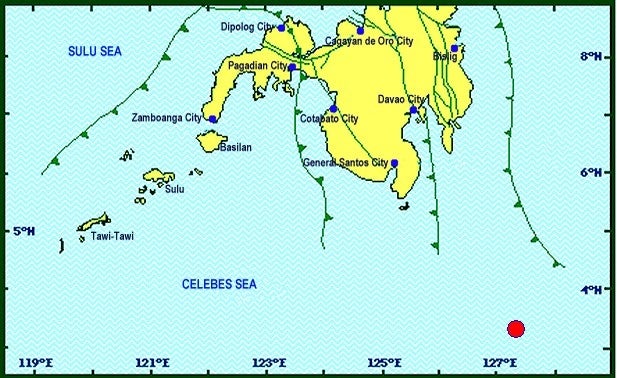 A map posted on the website of the Philippine Institute of Volcanology and Seismology shows the epicenter of the 6.4-magnitude quake that hit past midnight Tuesday. PHIVOLCS WEBSITE

JAKARTA, Indonesia — A strong 6.4 magnitude earthquake struck off Indonesia’s Talaud islands north of Sulawesi early Tuesday but there was no threat of a tsunami, seismologists said.

The quake hit at 00:38 am local time (1638 GMT Monday), the US Geological Survey said, and was centered around 300 kilometers (190 miles) northeast of Manado and 320 kilometers southeast of the Philippine city of General Santos.

The Philippine Institute of Volcanology and Seismology said no damage was expected from the quake at sea, but aftershocks are foreseen.

It was felt at Intensity 1 in Alabel, Sarangani province.

The Pacific Tsunami Warning Center said there was no tsunami threat from the quake.

In its preliminary impact assessment, the USGS said there was a low likelihood of casualties and damage from the tremor.

Indonesia sits on the Pacific “Ring of Fire” where tectonic plates collide, causing frequent seismic and volcanic activity in the region.

A 6.9 quake struck in the Banda Sea in December sparked panic but no reports of damage or casualties. CB

4 provinces near Metro to be hardest-hit by big quake – Phivolcs
Nuclear blast eyed in 5.1-quake near North Korea test site