Children in the age of Obama

My children grew up in the age of Obama, which is now in its last 12 months. And there are many things to be thankful for.

The gloom that engulfed the economy has lifted. A new healthcare law would allow my sons to be covered by their parents’ health insurance a bit longer, until they’re age 26. Last week, in a bold move, President Obama vowed to pursue executive actions to curb the wave of gun violence that has killed so many, including children.

“First graders,” the president said, choking back tears. “Every time I think about those kids, it gets me mad.”

But despite the positive changes in the last seven years, it’s hard to celebrate the era of Obama as a time of stability and security for all children. A key reason can be summarized in one word: drones.

Drone warfare became a standard policy during the administration of George W. Bush. It not only continued during Obama’s time, it expanded. 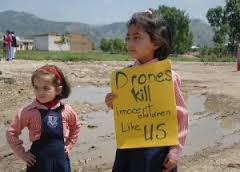 In Pakistan alone, 256 to 633 civilians have been killed in drone strikes under the Obama Administration, up from 167 to 332 during Bush’s time, according to the Bureau of Investigative Journalism, which has been monitoring the campaign.

Fewer children have been killed during Obama’s term, according to the organization’s data. But the number is still staggering: between 66 and 78, more than three times the number of kids killed at the Sandy Hook massacre.

Overall, up to 4,000 people have been killed by drones since 2004 in Pakistan, up to a third of them civilians, and roughly 200 were children, according to the Bureau of Investigative Journalism.

Drones have wreaked havoc on communities in other countries.

In Yemen, a 13-year-old boy named Mohammed Tuaiman spoke of how American drones terrorized his family and his entire village. His father and brother were killed in drone strikes.

“I see them every day and we are scared of them,” Tuaiman told The Guardian in 2014.

“A lot of the kids in this area wake up from sleeping because of nightmares from them and some now have mental problems,” he continued. “They turned our area into hell and continuous horror, day and night, we even dream of them in our sleep.”

A few months after that interview, in February 2015, the boy was dead, killed in another CIA drone strike, the report said.

Obama saw drones as “an alternative to the messy, costly wars that topple governments and require years of American occupation,” journalist Mark Mazzetti writes in “The Way of the Knife,” his insightful account of the CIA’s role in the U.S. campaigns in Central Asia and the rise of drone warfare.

But Mazzetti writes: “The analogy suggests that the new kind of war is without costs or blunders — a surgery without complications. This isn’t the case.”

For one thing, drone warfare has “lowered the bar for waging war, and it is now easier for the United States to carry out killing operations at the ends of the earth than at any other time in its history.”

Obama has struggled with it.

“Look, you wrestle with it,” Obama told the New Yorker in 2014. “And those who have questioned our drone policy are doing exactly what should be done in a democracy—asking some tough questions. The only time I get frustrated is when folks act like it’s not complicated and there aren’t some real tough decisions, and are sanctimonious, as if somehow these aren’t complicated questions. Listen, as I have often said to my national-security team, I didn’t run for office so that I could go around blowing things up.”

But he had no choice, he seems to be saying, and in these tough decisions based on complicated questions, as the U.S. wages war on groups capable of ruthless violence, the death of children in other lands may be inevitable.

This will be debated for years to come after Obama steps down.

In any case, the death of children in the drone campaign is the biggest stain on the Obama administration, one that would make many (including me) back off from calling him a great president.