IN THE KNOW: Kagitingan Reef 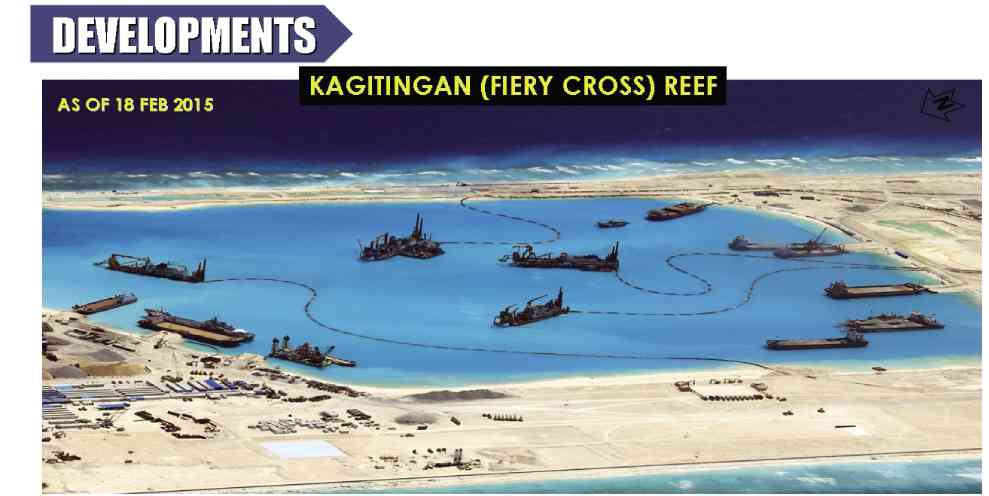 DISPUTED REEF Photo provided by the Center for Strategic and International Studies show Kagitingan (Fiery Cross) Reef (above) with a 3,125-meter-long airstrip built by China and reclamation work going on on the reef in the Spratly archipelago also claimed by the Philippines and Vietnam. REUTERS/CSIS/AFP/PAO

KAGITINGAN Reef, internationally known as Fiery Cross Reef, is part of the disputed Kalayaan Island Group on the Philippine side of the Spratly archipelago in the South China Sea.

Besides the Philippines, China and Vietnam also claim Kagitingan Reef.

In 2014, China began to reclaim land on disputed reefs in the Spratlys and build airstrips that could be used for landing military aircraft.

In October 2014, Foreign Secretary Albert del Rosario said the Philippines submitted a note verbale to China, “protesting the activity” in the West Philippine Sea, waters in the South China Sea within the Philippines’ exclusive economic zone.

In November 2014, a London-based security group, IHS Jane’s, disclosed in a report the details of the land reclamation project China was undertaking on Kagitingan Reef.

According to the report, the artificial island is 3,000 meters long and 200-300 m wide, one of several reclamation projects being pursued by China in the region but apparently the first that could accommodate an airstrip. A harbor has been dug out on the east side of the reef that appears large enough for tankers and naval warships, it said.

It also said the artificial island had a Chinese garrison and had a pier, air defense guns, antifrogmen defenses, communications equipment and a greenhouse.

As of September 2015, the runway built atop Kagitingan Reef was 3,125 m long. The airstrip is long enough to accommodate bombers like the H-6K, whose air-launched cruise missiles increase its destructive power. Inquirer Research