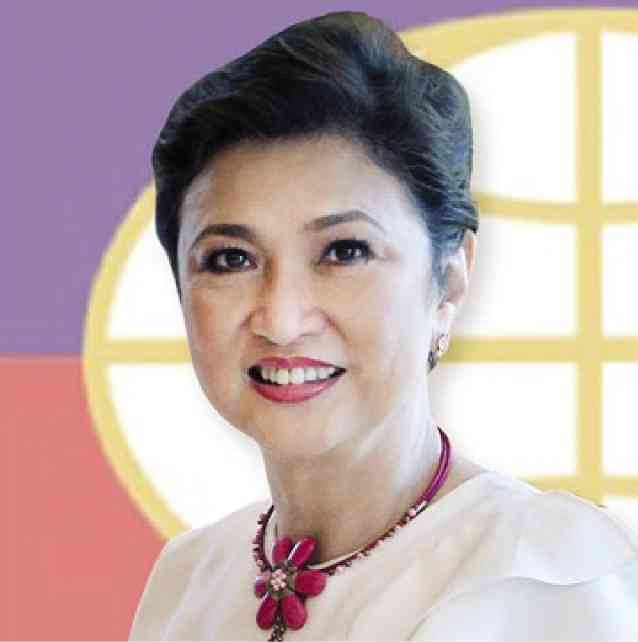 (This is a speech delivered by Imelda M. Nicolas, chair of the Commission on Filipinos Overseas [CFO], during the Emerging Markets Network Meeting titled “The Innovation Challenge” at the Organization for Economic Cooperation and Development headquarters in Paris, France.)

HOW can Asian governments encourage innovation in Asia? Allow me to give some innovative programs that the administration of President Aquino has put in place.

The first two are innovations in good governance, the third is on public and private partnership, the fourth is in science and technology, the fifth is on disaster management while the last is the role of the diaspora in the home country.

Through the initiative of the Department of Budget and Management (DBM), the government implemented in 2012 a breakthrough “bottom-up” approach in crafting the annual national budget.

It engages grassroots communities in the process of formulating and implementing the national budget. For the 2015 budget, community-based organizations and local civil society organizations engaged 1,633 cities and municipalities all over the Philippines in developing local poverty reduction programs and projects.

The result was a larger allocation of almost P21 billion  in 2015, from P8 billion in 2013 and P20 billion in 2014, to fund local projects, such as potable water supply, agricultural infrastructure and facilities support, rural health-care facilities, and sustainable livelihood programs.

This was a historic milestone for the government, since in the past the national budget was crafted from top to bottom, with top officials exclusively deciding where public funds should go.

The government is committed to open governance through initiatives such as the launching of Open Data Philippines (data.gov.ph) in 2014.

Spearheaded by the DBM, the website consolidates the data from different government agencies and makes it available in formats meant for easy downloading and use.

The site is digitizing hard copies of agency data into computer-readable formats. This initiative acknowledges that every Filipino has the right to access every government record, including information on where their taxes go, itemized collection and disbursements of the budget, procurement documents including invitation to bid and public funding awarded to private entities, among other things.

This is a special government-created task force composed of representatives from the government and private sector (with the latter cochair as the more proactive one) directed to build up the long-term competitiveness of the Philippines through policy reforms, project implementation, institution-building and performance monitoring.

It is tasked to implement the game plan for competitiveness, which sets reform targets per government agency accountable for any of the 10 indicators measured in the Doing Business Report.

This public-private sector collaboration has succeeded in coming up with very positive results. According to the 2014-2015 Global Competitiveness Report of the World Economic Forum, the Philippines ranked No. 47 out of 140 countries and is the “most improved country overall” in terms of Global Competitiveness Index in the last four years.

The Philippines has also climbed 13 notches from No. 108 to No. 95 of 189 economies in the 2015 World Bank-International Finance Corporation Ease of Doing Business Report. The country has gained 53 spots in the Doing Business Report since 2011, the largest gain in the region.

“Smarter Philippines” is the fully integrated developmental program of the Department of Science and Technology (DOST) to leverage “smart technologies” and innovation.

Through the infusion of science, technology and innovation, the DOST aims to promote the country’s development in the sectors of governance, jobs, industries, microsmall and medium enterprises (MSMEs), farming, healthcare, funding for scientists and engineers, and climate change adaptation.

The DOST’s flagship program for MSMEs, the Small Enterprise Technology Upgrading Program (or Setup) is a nationwide strategy to encourage and assist MSMEs to adopt technological innovations in improving their operations and thus boosting their productivity and competitiveness.

When Supertyphoon “Yolanda” (international name: Haiyan) hit the Philippines in 2013 and almost wiped out the coastal towns in Leyte in Central Visayas, our country was put in the world spotlight as one of the most disaster-prone countries.

While we cannot prevent another Yolanda from hitting our shores, we made sure that policies are in place to ensure preparedness of the government and the people when natural disasters and calamities strike.

Through President Aquino’s “build back better” policy, the government considers enhanced designs and standards in reconstruction in devastated areas to ensure the survivability of infrastructure, as well as the safety of location.

Moreover, to build the country’s risk resilience, the government focuses its efforts on strengthening the country’s natural ecosystems and on building the adaptive capacity of local communities (especially those vulnerable to shocks and disasters), consistent with the National Action Agendas for Climate Change.

We at the CFO, recognize the significant role of our more than 10 million overseas Filipino workers (OFWs) in the country’s development. Their remittances, which according to the World Bank reached $28 billion in 2014 (next to China with $64 billion and India with $71 billion), have not only financially supported their families but have also helped in expanding the Philippine economy.

OFWs are a major potential source of direct investment in critical industries, and acting as “first movers” who open the way for other, more detached investors.

They are also excellent intermediaries who can facilitate the Philippines’ integration into the global economy. Characterized as “cultural interpreters” and “reputational intermediaries,” diasporas can connect the Philippines to potential foreign investors and lobby in their destination countries for more favorable trade and labor flows.

In business activities that span the Philippines and destination countries, they are instrumental in developing export markets and other trade ties, supply chains and technology transfer.

In addition, the diaspora contribution extends beyond the economy and into the political and social spheres. The ideas, practices, identities and social capital that migrants remit home—so-called “social and political remittances”—could potentially alter behaviors within the Philippines and positively transform notions on critical issues such as governance, election of national officials, gender relations, and democracy.

The human capital, networks, skills and ideas acquired abroad are potentially useful to the Philippines’ development when migrants return. The value of Filipinos in the diaspora thus extends beyond the money they send home, a fact that is frequently overlooked in policy discussions on migration and development.

Our governance efforts and reforms are now bearing fruits. But despite these achievements, we still need to strive harder to sustain our economic growth, deepen the inclusivity of our development process and develop the sectors that are still lagging behind.

We know that the competition never sleeps, that is why we need to keep on innovating. We are fully aware that the Philippines, is still far from our Asian neighbors (Singapore, Hong Kong, Japan and South Korea) when it comes to science and technological advancement and innovation.

In view of this, and the deepening Association of Southeast Asian Nations (Asean) regional economic integration taking effect this 2015, we still need to look into the following:

5) Coming up with more incentives to attract people to go to the field of science and technology, and research and development.

The theme of this event includes the perspectives from the Economic Outlook for Southeast Asia, China and India 2015, and discussed research and development, and innovation challenges for the continent.