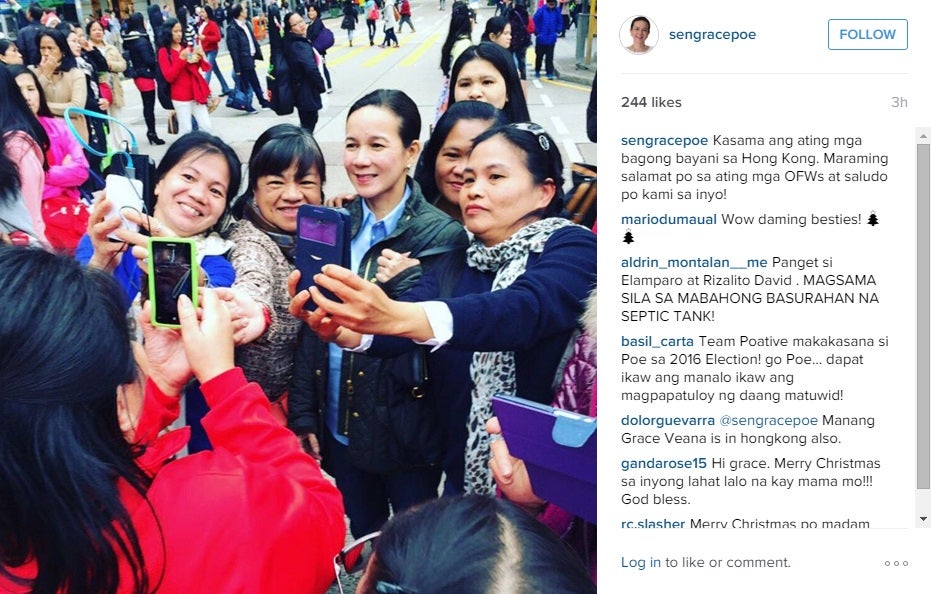 Away from political noise, Senator Grace Poe went to Hong Kong to spend Christmas with her family for at least a couple of days.

A video of Poe speaking before a crowd of Filipinos in Hong Kong was posted on Saturday in her official Instagram account and another photo with fellow citizen taking selfie with her was posted in her various social media accounts.

In the caption of the video and photo, the senator also thanked the Migrante Hong Kong for their warm welcome.

Poe’s staff member said the video was taken by Poe’s second child, Hannah, who was with her while they were strolling around Hong Kong and chanced upon the Christmas gathering of overseas Filipinos there.

The staff member said Poe and her family spent Christmas in Hong Kong and they would be there for a couple of days.

On Monday, Poe’s legal team will file a petition at the Supreme Court to stop the Commission on Elections from canceling her certificate of candidacy for president in 2016.

The Comelec earlier decided to disqualify Poe from the 2016 presidential race over her citizenship and residency. The senator is set to appeal the decision at the Supreme Court. IDL