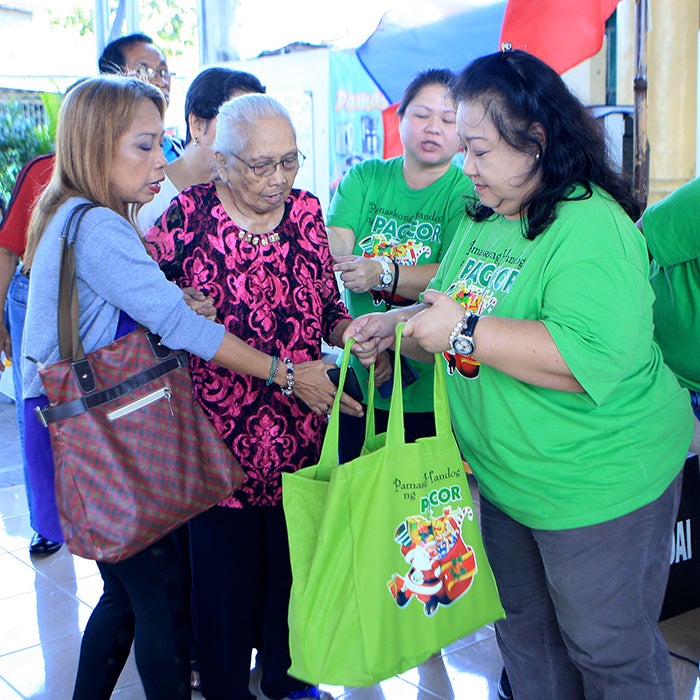 Members of the Filipino War Veterans Foundation, Incorporated (FILVETS, Inc.) and their families were treated by PAGCOR to a festive yuletide treat during the state-run gaming agency’s last day of Pamaskong Handog 2015. PAGCOR’s Senior Manager for Corporate Communications and Services Priscilla Allan (right) leads the distribution of gift packs to the beneficiaries. PAGCOR PHOTO

The Philippine Amusement and Gaming Corporation (Pagcor) recently concluded its Pamaskong Handog 2015 by spreading Yuletide cheer to some 300 surviving Filipino war veterans who fought during the World War II.

Pagcor Senior Manager for Corporate Communications and Services Department Priscilla Allan said the gift-giving activity was”not only meant to provide a merry Yuletide treat to surviving war veterans and their dependents “but also to extol the gallantry of those who fought for the country’s liberation from the Japanese forces.”

“We are happy and honored to bring Christmas cheer to our war heroes and their families.  At least, even in simple celebrations like this, we made them feel that their heroic deeds are continuously being recognized and appreciated,” she said in a statement.

Arthur Dominguez, son of 88-year-old war veteran Francisca Dominguez, said activities like Pagcor’s gift-giving event mean a lot to the war heroes and their respective families because it reminds them that their relatives’ patriotic deeds are not forgotten.

“Malaking bagay po para sa amin na may mga ganitong kaganapan na nagpapahalaga sa ating mga war veterans (It’s a big help for us that there is an event like this which honors our war veterans),” he said.

His mother, who now experiences hearing difficulties due to old age, was recognized for her efforts in caring for wounded Filipino fighters during the Japanese occupation.

Meanwhile, 40-year-old Anthony Mainis was also overjoyed when he learned that some of the dependents of war veterans like his father were chosen as beneficiaries of Pagcor’s gift-giving project this year.

His father, who survived a serious gunshot wound during the war, already passed away several years ago. But every time Mainis remembers his father’s struggles during the war, he still gets teary-eyed.

“Nakwento niya noon na akala niya’y ‘di na sya mabubuhay nu’ng nabaril siya. Marami raw kasing dugo ang nawala sa kanya. Kung hindi siya nakaligtas noon, malamang wala din ako (He told me that he had thought he would not survive when he was shot. He said he had lost a lot of blood. If he did not survive then, I probably would not be here now),” he said.

FILVETS Corporate Secretary and Chief of Operations and Services Col. Enrico Divinagracia thanked Pagcor for once again helping their organization through the Pamaskong Handog project.  The gaming firm was once a benefactor of FILVET’s healthcare program.

“Our organization will forever be grateful to Pagcor for remembering the war heroes and their respective families.  The gifts it has given us made their Christmas celebration truly memorable,” Divinagracia said.

Through the project, Pagcor said it was able to reach out to thousands of less privileged Filipinos under the care of several charitable organizations. Among them were indigent and homeless families; orphaned and abandoned children; underprivileged kids with congenital heart disease; children with mental retardation, autism and multiple disabilities; the elderly; cultural minorities; abused and disadvantaged women; barangay health workers; and disaster volunteers. IDL