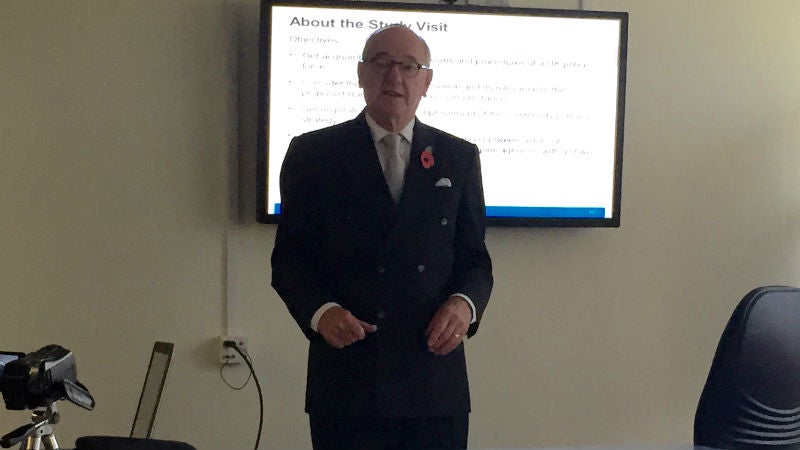 Police and Crime Commissioner Winston Roddick is the first-ever elected crime czar for North Wales. He is the person accountable to the people for the performance of the police and he has the power to fire the police chief. Roddick meets with the Philippine study group brought to North Wales by the British Council to learn how community policing can be implemented in the future Bangsamoro in Mindanao. Juliet Labog-Javellana

NORTH WALES, United Kingdom—Winston Roddick, the first-ever elected police and crime commissioner for North Wales, has this message to the Philippine police: consulting the people is essential.

“You’ve got to keep in touch with the community. Once you’ve set it up and you’ve built the bridge, you have to cross that bridge regularly in order to maintain the relationship,” Roddick told members of a Philippine technical working group looking for a model for policing in the proposed Bangsamoro autonomous region.

Elected in 2012, after England and Wales created the position in 2011, Roddick is the person accountable for governing the police in North Wales.

“This job is entirely new. There’s nothing quite like this in the history of British policing. It’s novel but it’s a big step forward,’’ Roddick said in a meeting with the Philippine delegation at the main headquarters at Colwyn Bay.

“I am the public face of the police. If the police are unpopular with the people, the people come and tell me, and I speak to the police chief officers and say this is what I have heard, explain yourself and tell me what you are going to do to reform,” he said.

Roddick, one of the four commissioners in Wales, has the power to fire the chief constable (police chief) of North Wales.

At the time of the visit by a 12-member study group brought here by the British Council last month, Roddick was working on a third revision of his Police and Crime Plan for 2015.

He has 11 consultation meetings to conduct until February to submit the plan to public scrutiny.

Roddick will meet with senior citizens, the disabled and champions of children’s rights to get their views on whether his plan is acceptable. His goals are security in the home, safety in public places and visible and accessible policing.

While Roddick sets the broad strategy, the police force is empowered to lay out the operational and tactical details to achieve those goals. The commission advertises the plan and the consultation dates, and the public can comment online (http://www.northwales-pcc.gov.uk/en/Home.aspx).

“I go to the mosque and listen to and observe the service. We demonstrate how much we value a relationship with minority groups of that kind and I know they value it greatly,” he said.

Drawing on the Northern Ireland peace process, Roddick said tolerance was quite important. “You can’t heal those wounds without tolerance, understanding and forgiveness with a big F,” he said.

Whatever model they choose for the Bangsamoro, public trust is vital to its success, Roddick said.

Noting how the Philippine officials were wowed by resources at the disposal of the North Wales police, Philip Thomson, British Council consultant and team leader of the community policing project for the Bangsamoro, told the visiting group that they should look at North Wales as “aspirational” and focus on the mind-set rather than the means.

“This is not a comparative study. What is relevant, we take back to the Philippines. What is not relevant, we leave behind,” said Thomson, a former police commander in the area who managed the weeklong tour.

Roddick’s talk, and the immersion with the North Wales police, brought candid realizations for the group, most of whom were law enforcement officers in the Autonomous Region in Muslim Mindanao (ARMM). 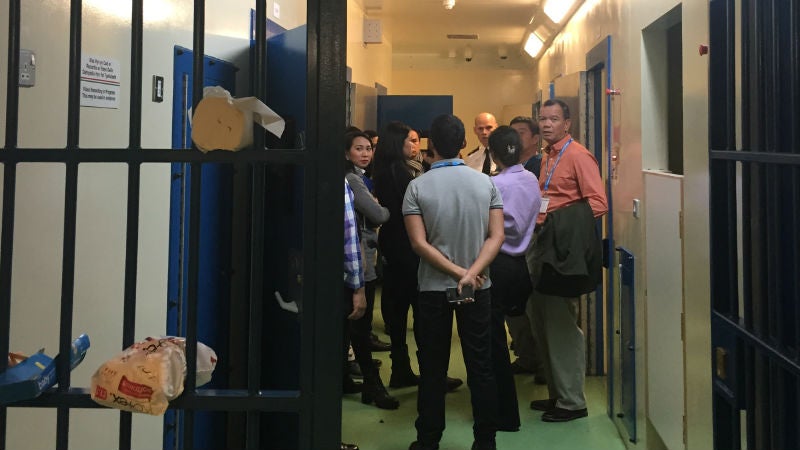 The custody suites at St. Asaph City where crime suspects are handled as “customers to be treated with respect” in accordance with the policy of the police.

They constituted a technical working group tasked with producing a “tool kit” for community policing in the proposed Bangsamoro, a project funded by the British Council.

The officials saw the military orientation of the police as a problem, along with corruption, lack of professionalism and scarcity of resources.

He said policemen, assigned on rotation, did not even speak the language in the communities.

“What we have is a nationalized police force that is hierarchical, where decisions are made [at the] top. So you lose the ability to look at specific problems at the level of the community that allow your police officers certain levels of decisions to respond,” Sinarimbo said.

A big concern in the Bangsamoro communities is the reputation of the police, he said.

Brig. Gen. Buenaventura Pascual, chief of the military’s peace process office, was also impressed with the level of community engagement by the police here.

In the Philippines, the “vertical” orientation of the police force does not allow for community engagement, he said.

“First our structure is very vertical, meaning the [station] chief of police is answerable to the provincial, then the regional director then the chief PNP (Philippine National Police). So the objective of the police officer is to satisfy the chain of command because it will affect his career, promotion, schooling and reassignment,” Pascual said.

“Wow, very far,” lawyer Anwar Malang, regional director for the Department of the Interior and Local Government in the ARMM, said of the image of the Philippine policeman compared to his British counterpart. 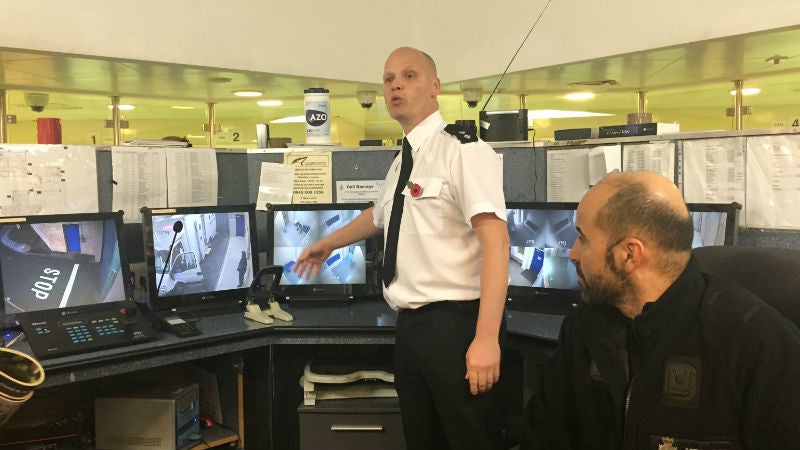 The security cameras at the detention facility in St. Asaph City monitor each detention suite which also has remote pulse monitors that alert duty officers if a detainee is not breathing for some time.

“In their case, they are very proactive and protective of the integrity of the policemen. And if you notice, the ranking system is sort of immaterial with them. Policemen in our case are very militaristic in orientation, even in the ranking itself. For instance, you have a chief PNP with a four-star rank and many generals surrounding him,” Malang said.

He noted that the North Wales police was “extra proactive.’’

“Before crimes happen, they already have their solutions,’’ Malang noted. “I couldn’t believe that with that sophistication, they are going to present us about shoplifting,’’ Malang quipped about the sessions where police demonstrated how they deter or track shoplifting using advance technology such as high-definition security cameras.

“In our case in the Philippines, we call them petty crimes. But for them shoplifting is a big issue, ‘’ Malang said.

Police reforms, starting with stringent rules for recruitment, are necessary, Malang said. He said that even the budget is lopsided in favor of the military.

“There should be a real policy in the Philippines wherein the police will be in charge of policing of the entire internal areas of the country and the military will only be in charge of external security. The police [are] the one that should be strengthened,’’ Malang said.

Apart from this, Malang said the lack of continuity of policy and corruption in the justice system also contribute to the ineffective police force.

“Our main problem is our policy is dependent so much on who is sitting there as president or chief PNP or whatever position. We have no sustainability of programs because we do not have a good party system and because of that we have no sustainable programs,’’ Malang said.

While some concepts here would not be relevant, such as an elected commissioner, Malang said the British community policing could be “a very good start than can be a model for the entire country.”

Chief Supt. Ronald Estilles, PNP regional director for the ARMM, said he was impressed with the police officers here having the power to do what they thought was best for their communities.

“In our case, we have to clear everything with our superiors. If I am an inspector, I cannot do anything without the clearance of my chief of police. Everything has to be cleared upstairs,” Estilles said.

“Different communities have different problems so we really can’t have a one-size-fits-all (strategy). Community policing is relevant when you deal with communities because the community-based police know their neighborhood and what they need,” Briones said.

Through partnerships with business, schools and social organizations like what they do here, the Philippine police can do out-of-the-box solutions, he said.

Adopting an effective community policing scheme would require reforms in the PNP, and increasing the benefits of the police, Briones said.

“We are glad we have a chief PNP now, Director General Marquez, who is very positive about community policing,” Briones said.

Chief Supt. Wilfredo Franco, the director for Police Community Relations of the PNP, confirmed that Marquez’s policy runs in line with the community-oriented policing.

“Our PNP chief has anchored his administration on going back to the basics of policing, which is patrolling. He emphasized that the police should be seen more in the streets,” Franco said, noting that directive had been given to the 160,000-strong police force. 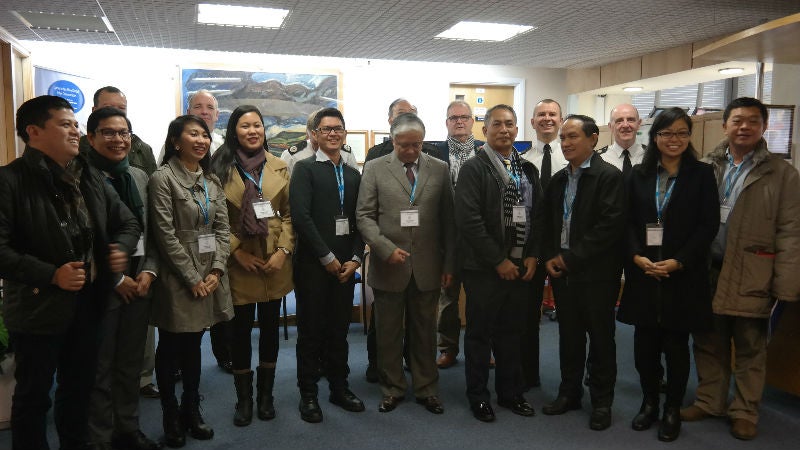 Members of the Philippine study group brought here by the British Council after a briefing by North Wales Police Chief Constable Mark Polin and his deputies at the North Wales police headquarters in Colwyn Bay.

“If you notice, our Chief PNP is a very practical person. He’s not one to invent new programs. We are emphasizing existing programs with proper implementation,’’ he said.

One existing program not properly implemented, Franco said, was the “Pulis Ko, Teacher Ko’’ which was similar in concept to the All-Wales School Liaison Project where police officers teaches subjects in primary schools.

“We have the idea but we are not doing it the right way. We lack planning in the strategic, operational and tactical levels,’’ Franco said.

Franco vowed implementing the police-school liaison program would be his advocacy. He said his wife, a teacher, has told him about the low awareness among Filipino students on the role of the police.

Franco said the PNP also nurtures its partnerships with big companies like Metrobank, which honors outstanding cops every year, and with Ayala Group which sponsors police stations near the malls.

Franco conceded that the PNP does not have massive resources like what their British counterparts have. But he said how a police officer makes do with scarce resources is somehow a measure of his character.

“I have been a station commander of six municipalities and city stations. If you do not have the money to improve the structure, at least make sure your station is painted and clean. I share the belief of our Chief PNP on how you can tell the character of a police commander – when you go to his station and check if his restroom is clean,’’ Franco said.

Thomson said they have conducted consultations with some 30 communities and 23,000 people in Mindanao on what kind of community policing they want for their areas.