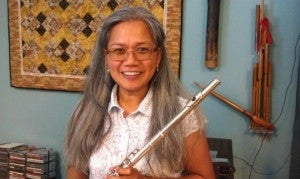 The only other recipient this year of the prestigious award was Grammy winner and music executive Randy Spendlove, president of Motion Picture Music at Paramount Studios. Spendlove has worked with popular artists including Beyonce, Linkin Park, Green Day and U2.

ETM-LA presents these awards every year to people who have had an impact on people’s lives through music. 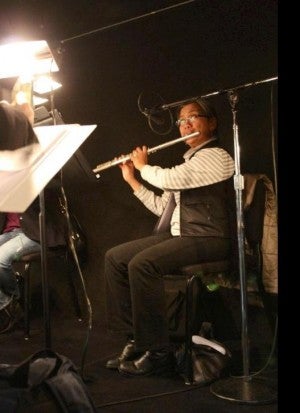 Asuncion Ojeda in performance with her flute.

“This is a nonprofit organization that works to put quality music education in disadvantaged schools,” according to Ojeda, who also received recognition from LA Mayor Eric Garcetti.

Ojeda has been teaching music in LA public schools for more than 14 years. She currently teaches in three schools: Normandie Avenue, Holmes Ave and Bushnell Way.

ETM-LA brings children, families and artists together to make music through school concerts and community events. The group sends excellent music teachers to share their talents with school children, who otherwise would not have the money and chance to learn from the “masters.”

Ojeda said, “To me, the award is an affirmation of the work that I have been doing—teaching music in public schools. It recognizes the importance of music teachers in a child’s education.”

Excelling in the Philippines’ indigenous instrument kulintang and flute, Ojeda grew up in Quezon City with a musically inclined family. She recalls learning to play the guitar from her sister, Carol Ojeda Kimbrough, a college professor in Orange County, while she picked up the Hohner melodica piano, following the record collection of her father.

“As a child, singing was a big part of my day. I was always around people who loved music and who wanted to make music, so ‘talent’ was not something that I thought of,” Ojeda remarked. 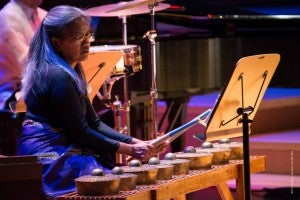 While flute is her main instrument, she has been studying with the Maguindanao and Maranao kulintang ensemble for the last 27 years under Guro Eleanor Academia through the World Kulintang Institute.

“I do consider myself as excelling in the kulintang tradition,” she said.

Kulintang is an ancient form of musical instrument from Southern Philippines made up of small horizontally laid gongs and drums that function melodiously.

Ojeda was an elementary classroom teacher in all subjects with LAUSD before teaching music since fall of 2001.

For about ten years she taught private flute lessons while working on school presentations with the World Kulintang Institute through the Music Center on Tour program.

“My best music inspiration is any good choral conductor; I am moved by how they can work with a group of people from varied musical backgrounds and vocal abilities, taking them to a level where they sound like a unified, attuned, artistically expressive ensemble.”

Seven years ago, she discovered the Filipino American Symphony Orchestra (FASO) on Facebook and became a part of this group ever since, performing at the Alex Theater last month in the production of “FASO Goes Pop!”

She said FASO, through thoughtful programming, has attracted a good patronage among the Filipino communities for symphony concerts.

Catering to her roots, Ojeda focuses on her kulintang studies. She hopes to someday travel to Mindanao and jam with other kulintang players.

“The World Kulintang Institute classes and rehearsals are structured such that I am given the opportunity to assist with instruction. I enjoy that very much, and I hope to do more kulintang teaching in the future.” 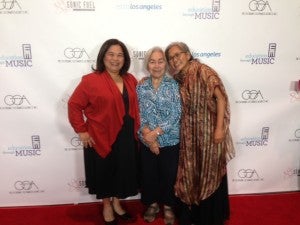 She will continue teaching music in a public school and share with disadvantaged children the many benefits of using music as a teaching method to open their creative outlook and opportunities.

“Musicians are trained to listen, and as a music teacher, it is my job to encourage students to listen to music, to listen to themselves, to listen to one another. Engaging in a more pensive thought,” she mused. “How much better would this world be if we all just listen?”

Playing music is second nature to Asuncion Ojeda so that one can anticipate that her teaching will continue to bloom with her musical performances.

“I enjoy hearing and performing new compositions, as well as older music that most audiences might not recognize, and I hope to be part of concerts with this type of programming”.

Her community would truly embrace her aspiration to perform and to share more music by Filipino composers.

What’s in store for her? In March she will perform with the Musica Angelica Baroque Orchestra, and, “It looks like I might be going to Cambodia this summer to perform with a group a composition by Chinary Ung, a multi-awardee Cambodian-American composer.”