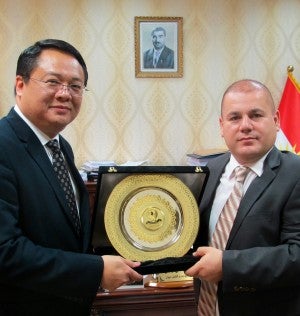 Chargé d’Affaires Elmer G. Cato of the Philippine Embassy in Baghdad with Director General Sami Jalal Hussein of the Ministry of Interior of the Kurdistan Regional Government of Iraq following a recent meeting in Erbil. CONTRIBUTED PHOTO

ERBIL, Iraq—Authorities in Iraq’s Kurdistan region received a commendation from the Philippine Embassy in Baghdad for the important role they played in the recent successful rescue and repatriation of 10 Filipino trafficking victims.

In a letter to Prime Minister Nechirvan Barzani of the Kurdistan Regional Government, Chargé d’Affaires Elmer G. Cato expressed the embassy’s gratitude for the assistance in bringing the 10 Filipina victims home two months ago.

At the same time, the embassy said it looks forward to further collaborating with the Kurdistan Regional Government as well as with the International Organization for Migration (IOM) in ensuring that the rights and welfare of Filipinos and other migrants working in the northern Iraqi region are protected.

Cato said the embasssy would not have been able to rescue and repatriate the victims without the support and cooperation of the Ministry of Interior, particularly Minister Karim Sinjari and Director General Sami Jalal Hussein, and the IOM.

“Their actions to immediately address our concern underscores the serious commitment of the Regional Government in working with the international community in combatting human trafficking and preventing the exploitation and abuse of Filipinos and other migrant workers in Kurdistan,” said Cato.

He added that the embassy is ready to work with regional authorities and the IOM in developing and strengthening their internal processes “to help ensure that the Kurdistan Region will stand out as a model in the way it protects migrant workers that it has been extending its kind hospitality to.”

The embassy said majority of the estimated 2,000 Filipino in Iraq are in the Kurdistan region where they work in the oil and gas, health, hospitality and services sectors.

Read Next
Chinese military conducts war games in South China Sea
EDITORS' PICK
Smart poised to turn PH into ‘Smart 5G country’ with nationwide rollout
Full operation of more sectors, businesses pressed to spur economy
New Vatican ambassador to PH named
Water remains our saving grace right now
We don’t want gov’t to fail, because it’s all of us who will suffer and die — Robredo
Get 80% OFF Ignite 2020 Cyber Tickets starting 28 September
MOST READ
Fernandez: Velasco camp ‘betrayal’ pushes call to retain Cayetano as Speaker
Palace: Some cities in Metro Manila eligible for MGCQ
Mayor Treñas tells Locsin: Iloilo City is much better than what you think
Duterte not keen on extending term — Palace
Don't miss out on the latest news and information.