If the fifth Republican debate made you feel fearful and anxiety ridden, here’s something to celebrate instead.

On December 17, 1943, 72 years ago this week, President Franklin Roosevelt signed the Magnuson Act, which repealed the Chinese Exclusion Laws. They were those nasty laws that came out of hateful rhetoric from the U.S. Senate, where the Chinese were called a “degraded and inferior race” that posed a threat to this country. Add a few epithets and comparisons to vermin and you get the picture. The result was a ban on immigration that lasted more than 60 years.

Heard a similar proposal lately by some guy whose name rhymes with rump?

In a twist, the Exclusion Act was repealed by the same man who unfortunately would forget his history lesson and later incarcerate 120,000 Japanese Americans.

But the U.S. would ultimately apologize for that too.

Don’t think for a second Filipinos have been immune. When my father came to the U.S. in 1928, Filipinos were American nationals and admitted to the country freely. But the Filipinos, mostly males to supply the workforce, were seen as taking away jobs, and a threat to society—primarily as procreators spreading that Filipino seed. The fear among white nativists became an often violent movement against Filipinos, resulting in the Tydings-McDuffie Act in 1934, when Filipinos in America were demoted to alien status and some were repatriated. Quotas were put on Filipino immigration, only to be lifted in 1965. 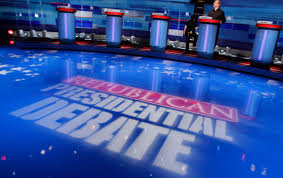 Filipinos have been through it. And Muslims are in it now.

Still, as one debate participant called it the other night, this week’s GOP debate was the Christmas Debate, the one we’ll talk all about at parties or at the dinner table where someone will no doubt invoke Allah in the spirit of diversity!

To make Tuesday’s Republican debate more seasonably cheery and merry, I tweeted out my idea for an Asian American drinking game.

If Asian Americans ever got mentioned by name, that would be our cue to sip, swig, or gulp the recreationally toxic beverage of our choice. If in short order there was a sudden glow about the nation lit up by the Asian Flush, then certainly we would have done the pollsters a favor. Asian American engagement would be so obvious.

Of course, if we were stone cold sober at the end, and there was no national glow–that would tell politicos something too.

Even if you took a sip at the mention of the victims of San Bernardino, say, in silent memory of Tin Nguyen, and if you took another shot when it was pointed out that the gunman Syed Farook was a Pakistani American born in the USA, you still wouldn’t have needed a designated driver at the end.

It was that kind of sobering debate. The politics of fear tend to do that.

A friend suggested it might even be better if we weren’t mentioned.

But that doesn’t make sense.

In the name of inclusion, it’s important for any person who wants to be president to acknowledge that he or she knows Asian Americans are part of this great country. This is the time to remind candidates that if they want to make America safe for all Americans, they’d better mean all of us.

Especially now, after Donald Trump’s idea to ban non-American Muslims has become a kind of tough guy litmus test that people are eating up.

In new polls, the majority of Republicans continue to back Trump and even like his idea.

So, of course, Trump, defended his stance. But then he ventured beyond potential immigrants and got specific about family members who were American.

In a video clip, Josh Jacob of Georgia Tech asked this question:  “Recently Donald Trump mentioned we must kill the families of ISIS members. However, this violates the principle of distinction between civilians and combatants in international law. So my question is, how would intentionally killing innocent civilians set us apart from ISIS?”

“We have to be much tougher,” Trump said. “We have to be much stronger than we’ve been. We have people that know what is going on. You take a look at just the attack in California the other day. There were numerous people, including the mother, that knew what was going on. They saw a pipe bomb sitting on the floor. They saw ammunition all over the place. They knew exactly what was going on. When you had the World Trade Center go, people were put into planes that were friends, family, girlfriends, and they were put into planes and they were sent back, for the most part, to Saudi Arabia. They knew what was going on. They went home and they wanted to watch their boyfriends on television. I would be very, very firm with families. Frankly, that will make people think because they may not care much about their lives, but they do care, believe it or not, about their families’ lives.”

And there was applause.

If I heard Trump correctly, he didn’t refute what the questioner stated. In fact, it sounded like he was justifying getting tough on a known terrorist’s family members in America.

I suppose that would make the second coming of internment camps in America seem quite appealing by comparison.

Unless, of course, you believe in a real democracy.

So who stood up for the Constitution? Why, the man with so little excitement in his campaign, they’ve replaced his last name with an exclamation point.

And boy, was he mad.
“This is another example of the lack of seriousness,” said Jeb! “Look, this is–this is troubling because we’re at war. They’ve declared war on us and we need to have a serious strategy to destroy ISIS. But the idea that that is a solution to this is just–is just crazy. It makes no sense to suggest this…That is not a serious kind of candidate. We need someone that thinks this through. That can lead our country to safety and security.”

He used some derivative of tough four times in less than 30 seconds.

But that is called “clash” and that’s what makes a debate.

It even led to this exchange when Jeb asserted himself while Trump was talking.

TRUMP: Am I talking or are you talking, Jeb?

TRUMP: You can go back. You’re not talking. You interrupted me.

TRUMP: Are you going to apologize, Jeb? No. Am I allowed to finish?

BLITZER: Just one at a time, go ahead…

TRUMP: Excuse me, am I allowed to finish?

BUSH: A little of your own medicine there, Donald.

TRUMP: I know you’re trying to build up your energy, Jeb, but it’s not working very well.

BLITZER: One at a time.

TRUMP: Look, look, look. We need a toughness. We need strength. We’re not respected, you know, as a nation anymore. We don’t have that level of respect that we need. And if we don’t get it back fast, we’re just going to go weaker, weaker and just disintegrate.
We can’t allow that to happen. We need strength. We don’t have it. When Jeb comes out and he talks about the border, and I saw it and I was witness to it, and so was everyone else, and I was standing there, “they come across as an act of love,” he’s saying the same thing right now with radical Islam.

And we can’t have that in our country. It just won’t work. We need strength.

BUSH: Donald, you’re not going to be able to insult your way to the presidency. That’s not going to happen. (APPLAUSE)

Just one of the debate’s key Bush/Trump moments. They clashed. Then the recess bell rang.

Cruz and Rubio also clashed, notably on immigration and on who exactly has been for a pathway to citizenship for the undocumented and who has not. Rubio said he is and Cruz was. Cruz said he wasn’t. The gloves stayed on for now.

But the clashes seemed to determine the four Republicans to watch going forward.

On the politics of fear meter, from least fear-mongering to most, it’s Bush, Rubio, Cruz, then Trump. But of course in popularity, the ranking is just the opposite.

Let’s hope that beyond the polls, the Republican candidates read some history. America has enough in the books to let future leaders know what happens when politics get stuck in the fear cycle.

Emil Guillermo is an award-winning journalist and commentator who writes from Northern California. Contact him at www.twitter.com/emilamok, www.fb.com/emilguillermomedia, and www.amok.com