PARIS – A legally binding agreement to curb global carbon emissions may have already been signed, but the fight for climate justice is far from over for the thousands of environmental activists who painted Paris red in protest of the lack of action against climate change.

Hours before the 21st Conference of Parties (COP21) officially adopted the Paris Agreement on Dec. 12, 2015, an estimated 2,000 demonstrators converged at the Arc de Triomphe and Eiffel Tower–both historic landmarks in the City of Lights–at 12 p.m. and 2 p.m., respectively.

Protesters weaved a long red banner in front of and around the protest venues, dancing and chanting to the tune of, “What do we want? Climate justice! When do we want it? Now!” 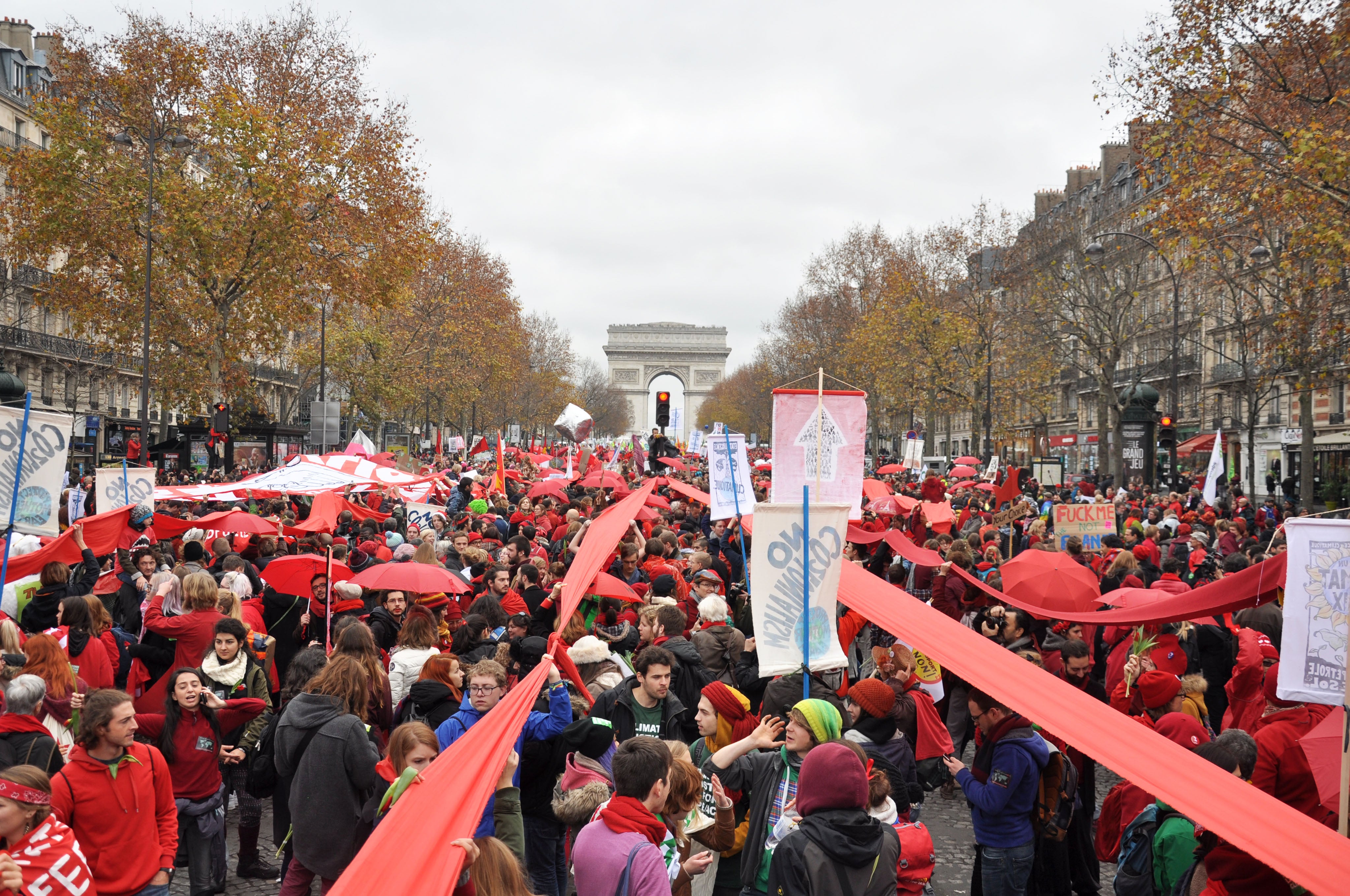 Thousands of protesters paint Paris red for climate change. More photos on the ground at the end of the article. PHOTOS BY SARA PACIA/INQUIRER.NET

Companions Helene Clement from Strasbourg, France, and Kevin Sparr from Germany made it a point to travel to Paris for the weekend to attend the demonstration, their cheeks smeared red and their stance defiant against the political intrigue that went into the COP negotiations.

“We must stop the power of politics and [industrialization]. We must respect nature and people for the future generation and for the future of all,” said Clement.

Instead of relying on governments and private businesses, the real solution to climate change they said lied in the people on the streets that day, who came from as far as Africa and the Philippines in calling for climate justice. “What we are doing today is [showing] the red line, our red line, and [industrialization is] not going to go over this line,” said Sparr.

Some protesters got creative with their expressions of protest. Natalia Cassinelli, an installation artist from Lima, Peru, wore to the protest only a round belly made of layers of latex and a cape bearing the words, “Je suis la vie,” which roughly translates to “I am life.”

“The world is the beginning of life, and that we tend to forget,” she said, eyes closed and a bouquet of red tulips in hand. “Here we are today, joined [in action]. It doesn’t matter where we’re from, we all come from the same place.”

COP21 adopted a legally binding agreement to reduce global carbon emissions to well below 2 degrees Celsius from preindustrial levels, adopted the agreement later in the evening the same day at past 7 p.m.

The protest was organized by a group dubbed “D12 mobilization,” who kept the venues secret up to the last minute to avoid police from clamping down on the protest. Among the environmental organizations that joined are 350.org, Attac, Confédération Paysanne, Réseau Sortir du Nucléaire, Climate Games and Aksyon Klima. 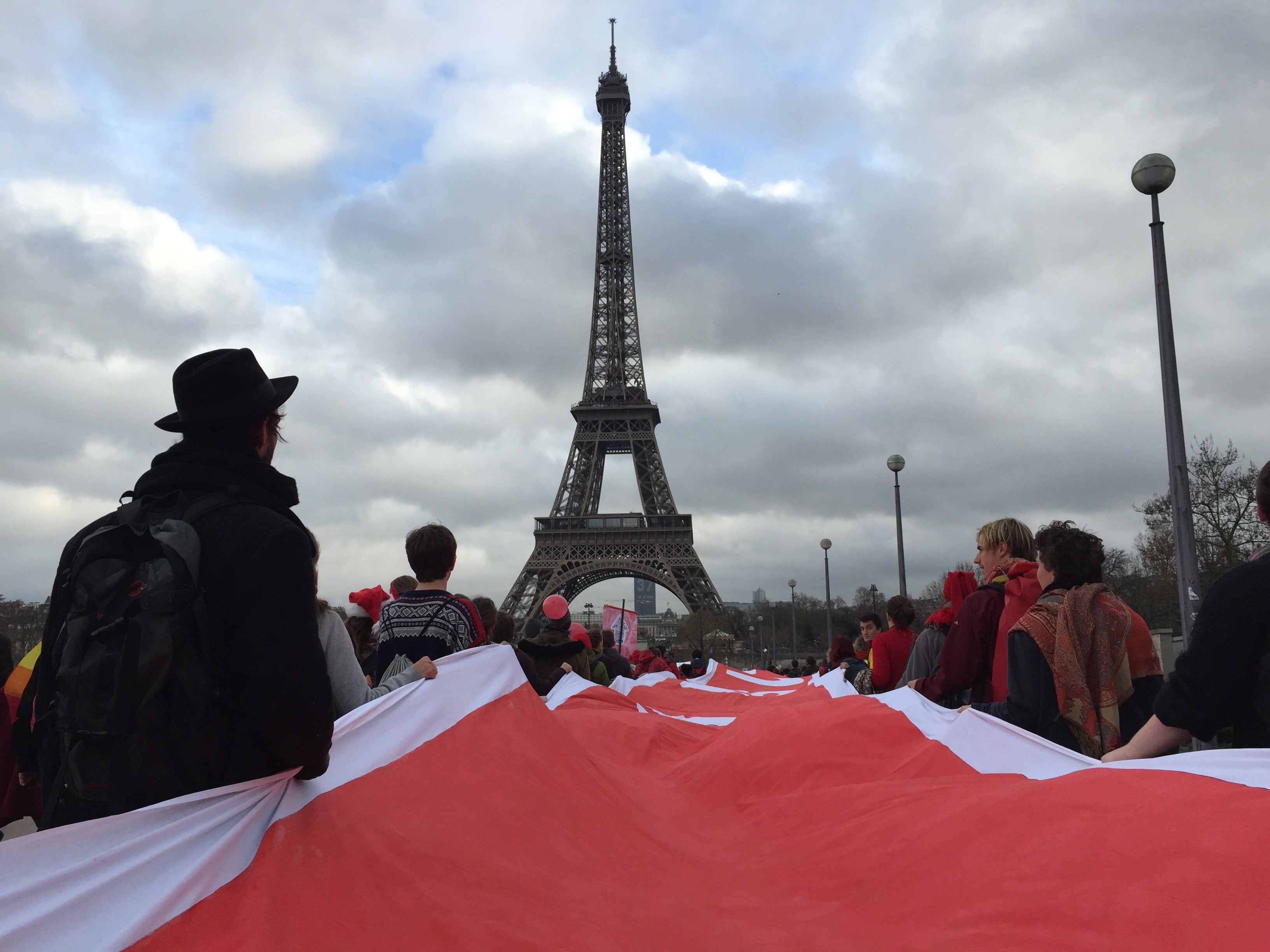 A red line is unfurled in front of the Eiffel Tower during the Dec. 12 protests in Paris, France. 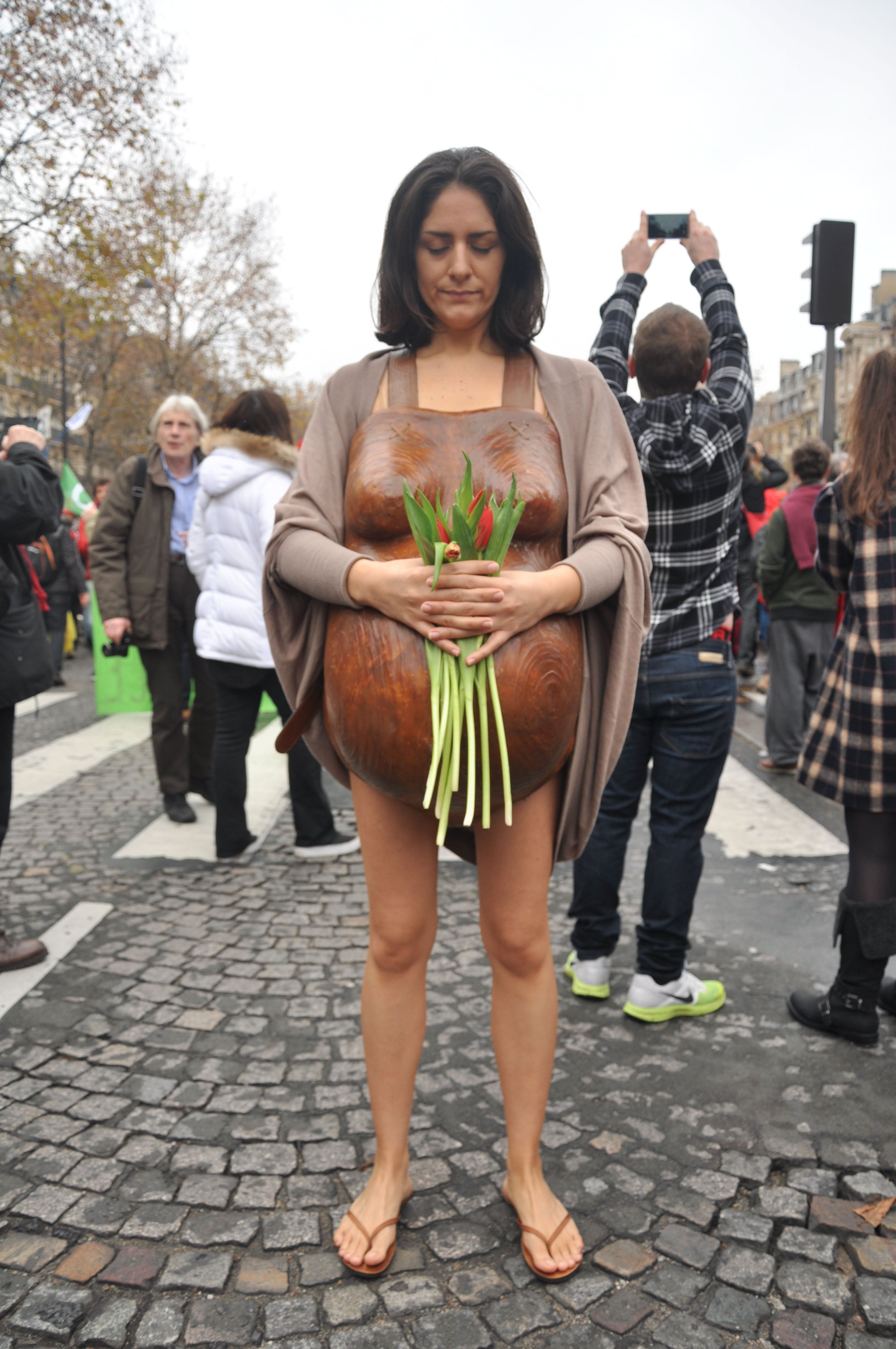 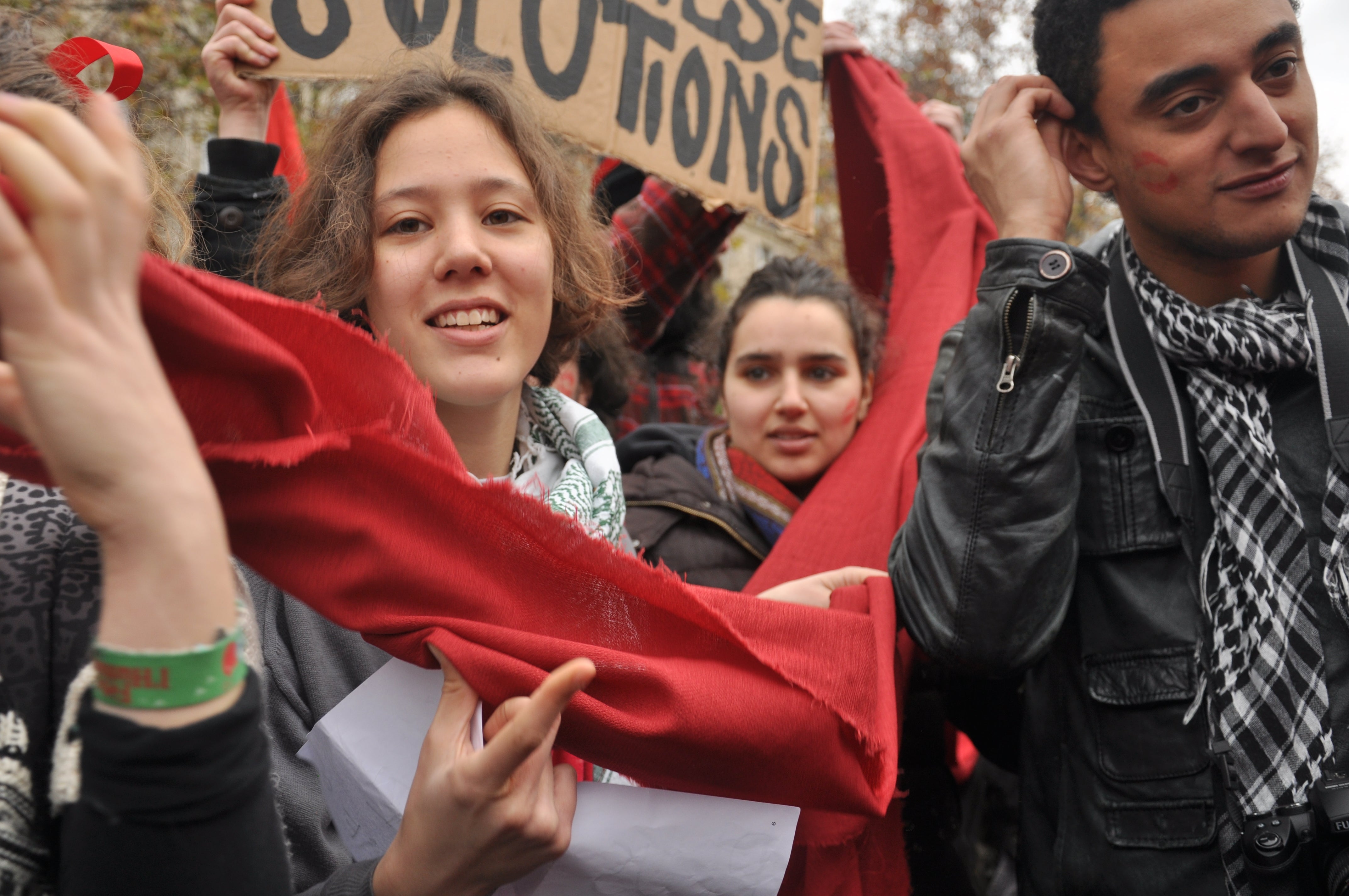 Environmental activists pass along the red line at Avenue de la Grande Armée, in front of the Arc de Triomphe. 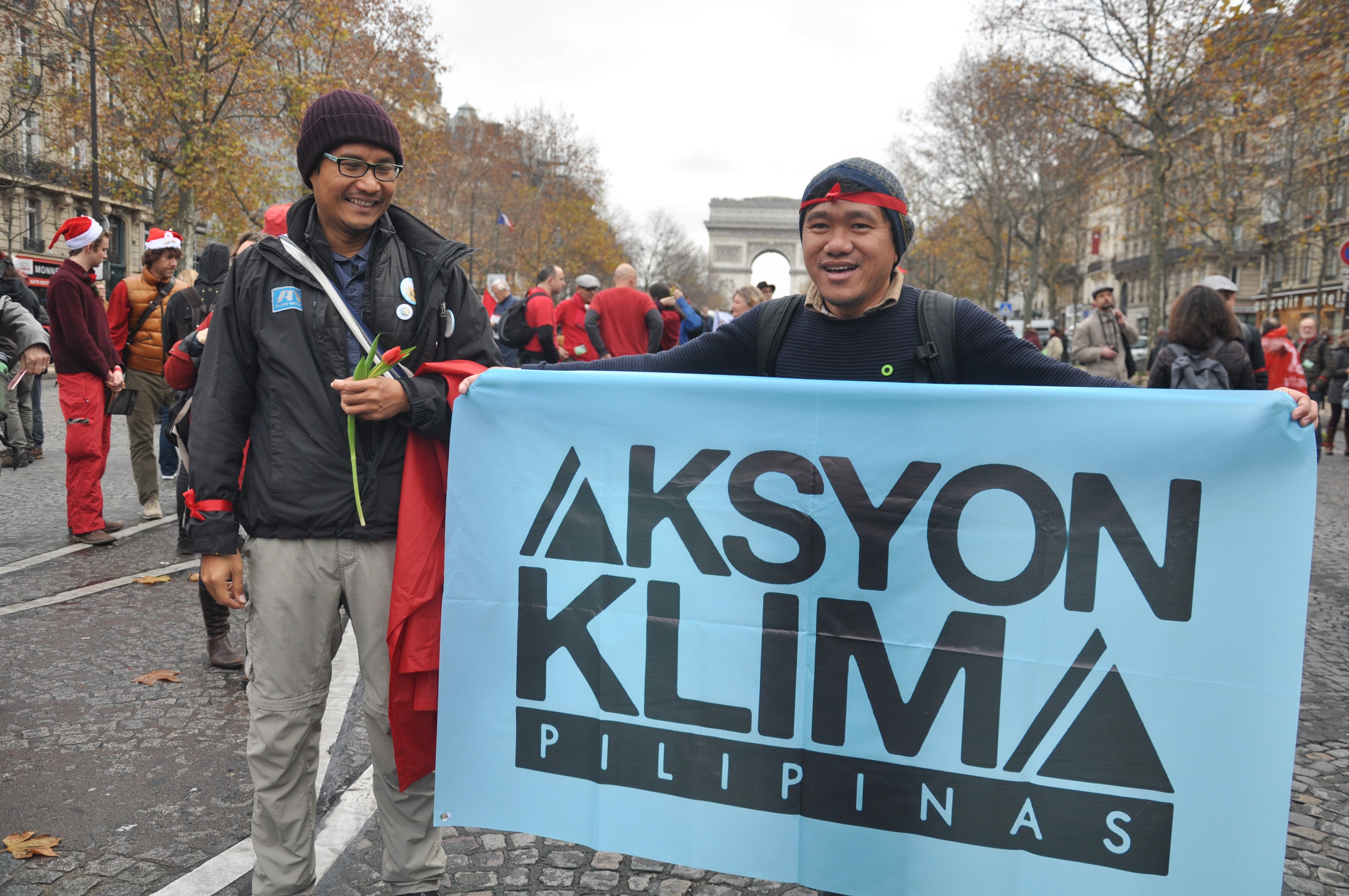 Members of Filipino activist group Aksyon Klima hoists their banner at the protest at Arc de Triomphe. The organization walked from Rome to Paris to call on leaders at COP21 to take action against climate change. 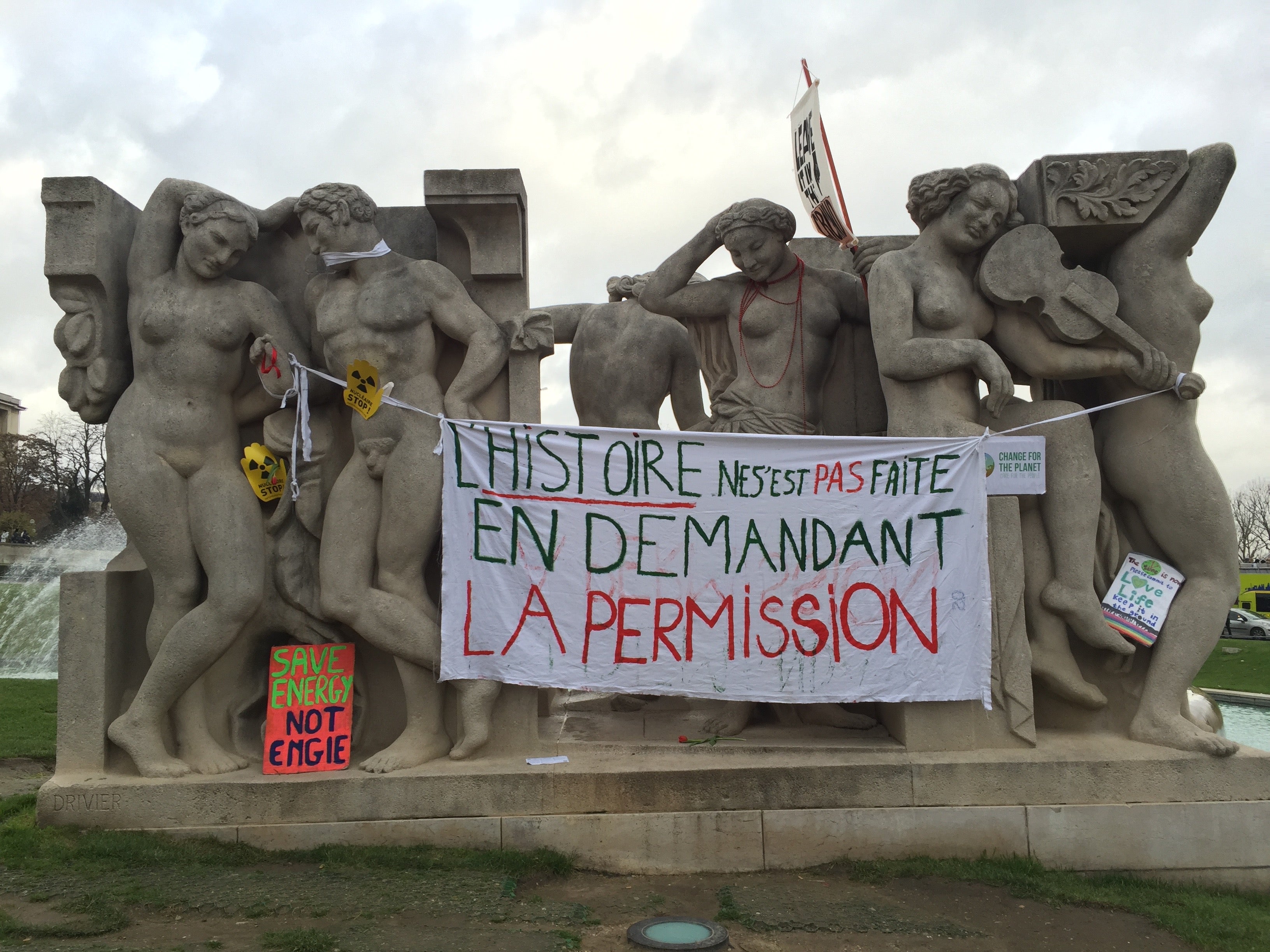 Statues in front of the Eiffel Tower are defaced with signs of climate protest. 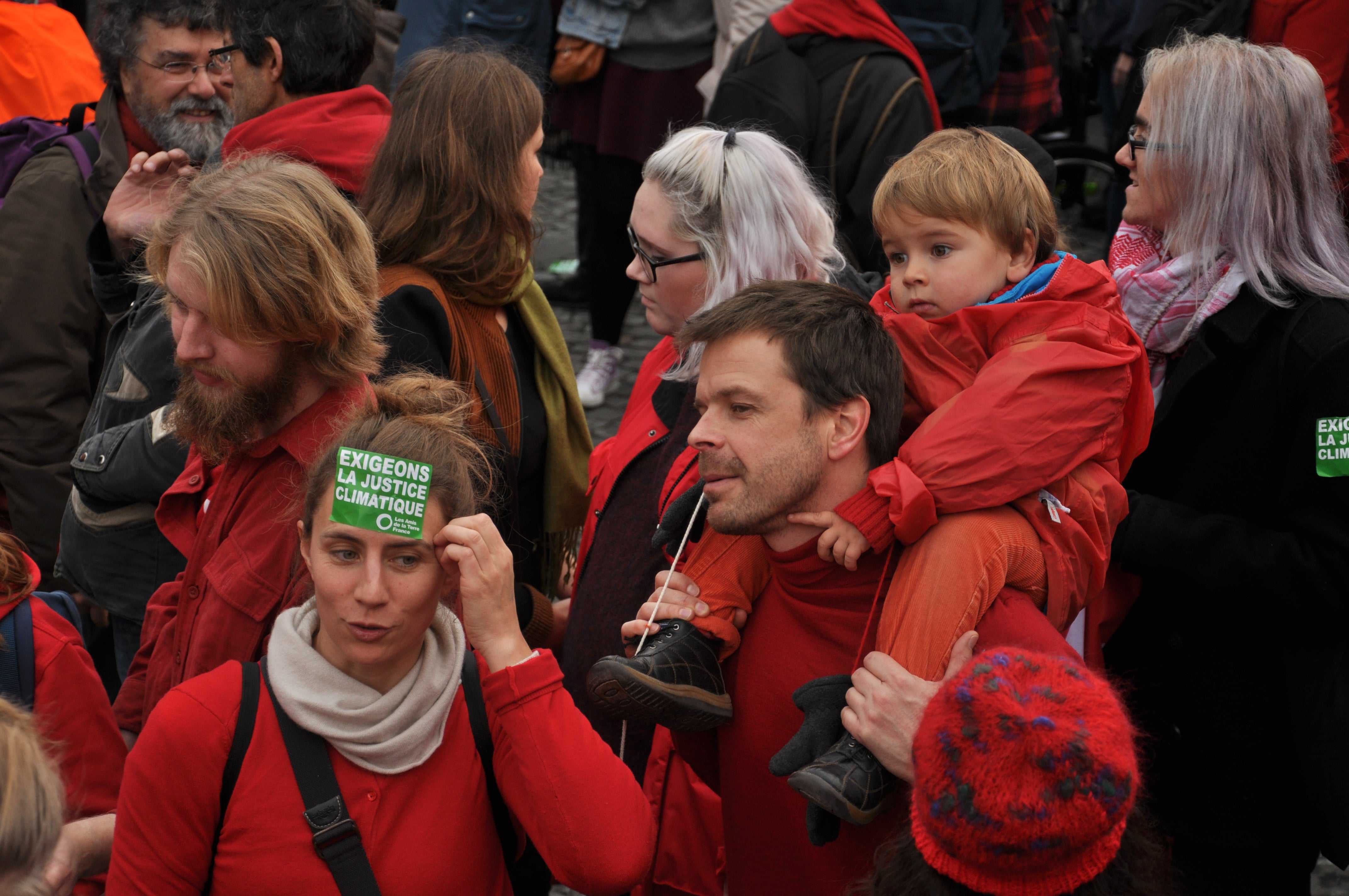 A young family is among thousands of protesters wearing red, the color of choice during the climate protest at Paris, France. 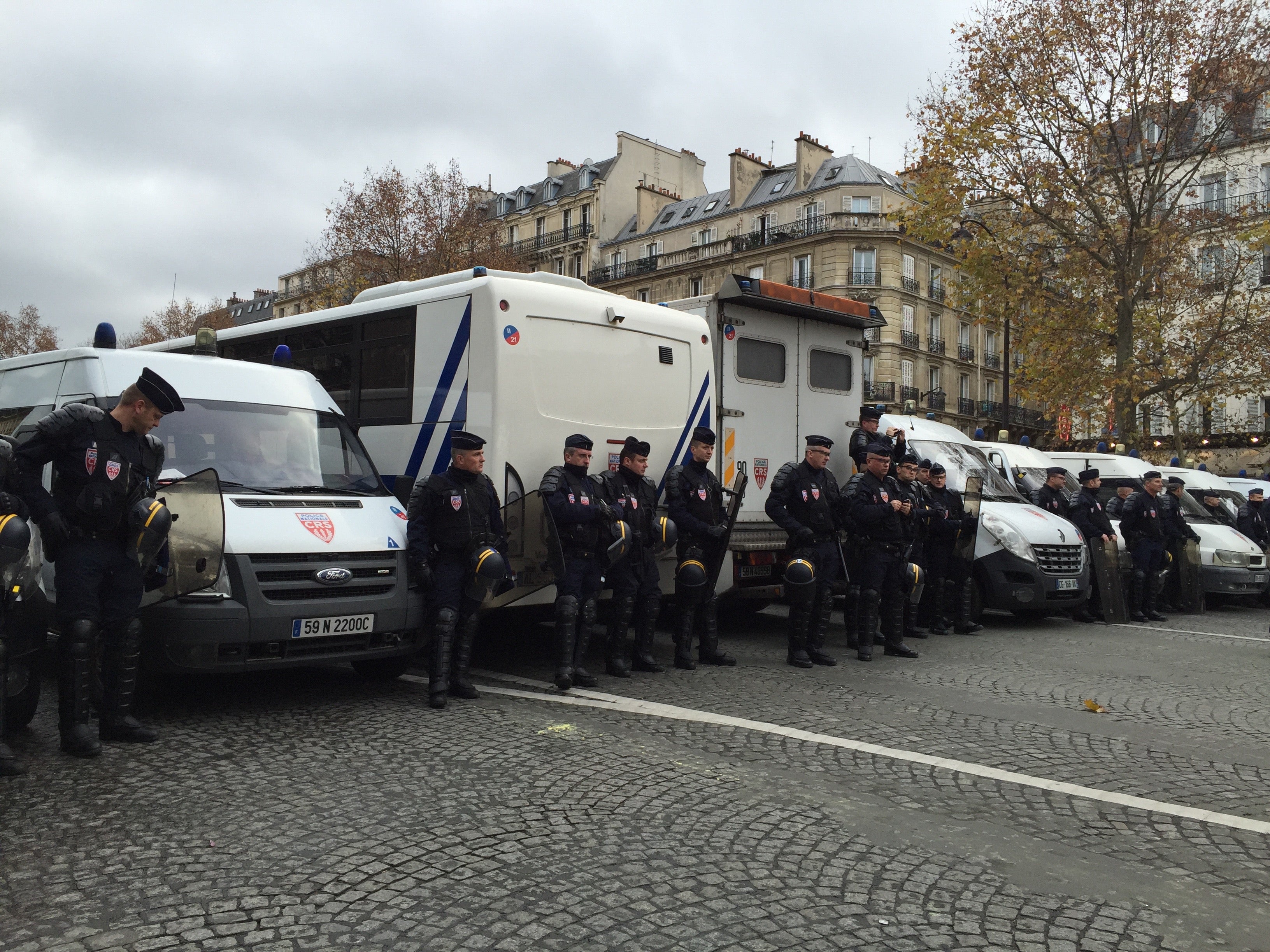 Police keep watch of the protests at the Arc de Triomphe. 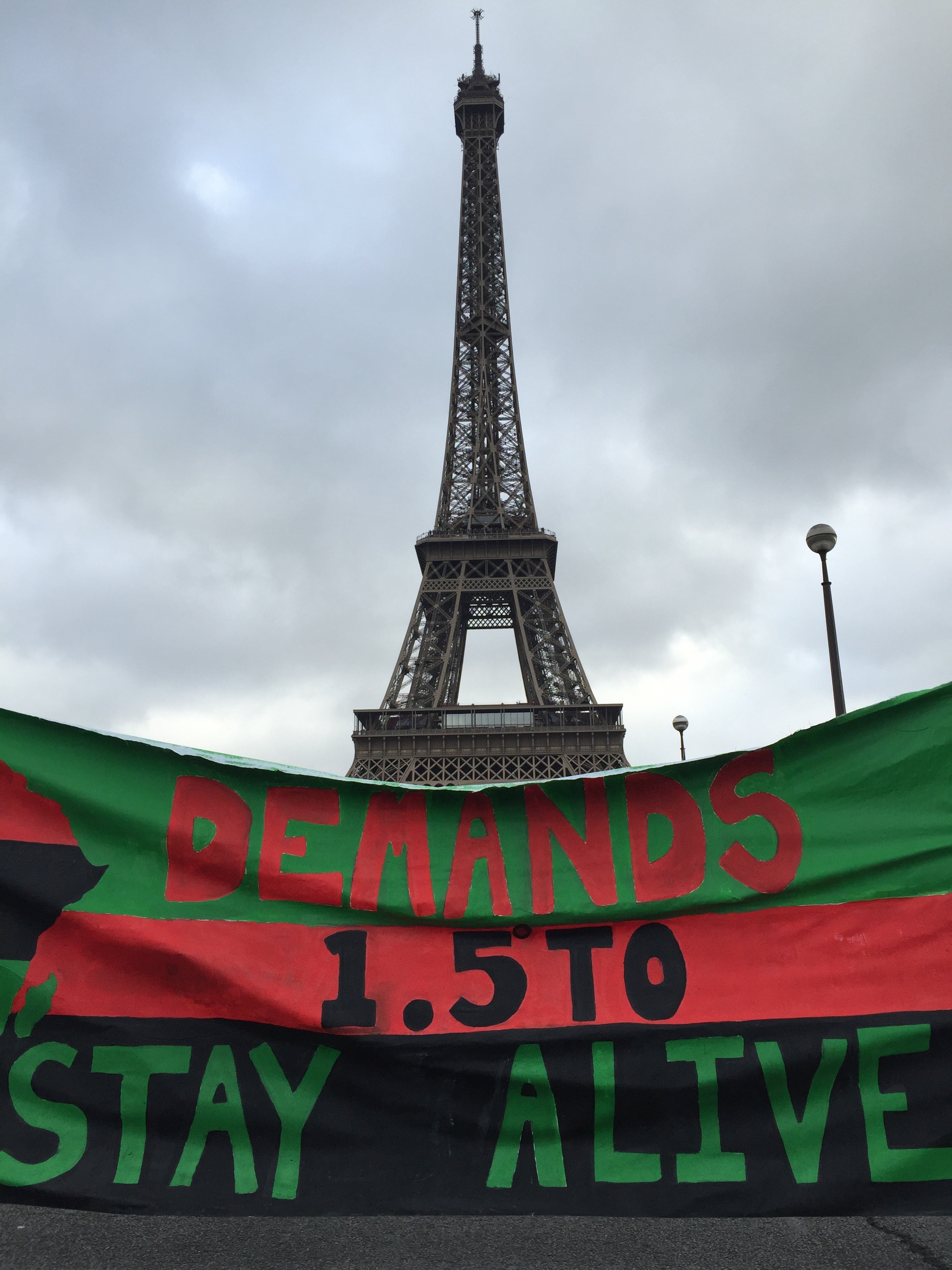 African protesters unfurl a banner with the battle cry of vulnerable countries, “1.5 to stay alive,” in front of the Eiffel Tower.