Did Trump disqualify himself from being U.S. president? 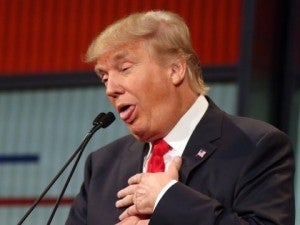 If you’re a Muslim in the Philippines and want to come to America, you better hope Donald Trump isn’t president.

If you haven’t heard, the “Mouth that Roared” is now calling for barring of all Muslims from entering America.

And if you are like me, I’m sure you have a relative or two in Saudi Arabia who has married or stayed there. If they were to visit you, they wouldn’t be able to.

Not if America becomes Trumpland.

All this of course is because of the shooting incident in San Bernardino last week.

I didn’t realize the extent of it when I got the first bulletin. But it forced President Obama to address the nation this weekend.

It’s a coincidence that the president should give his standup Oval Office terrorism talk on the eve of Pearl Harbor Day, December 7, the day that lives in infamy.

Unless you’re Asian American, of course, because December 7 simply started the clock that would bring us to Infamy Day’s domestic companion moment, February 19, 1942.

It took just over two months from the act that spurred a declaration of war for President Roosevelt to sign Executive Order 9066–the document that legitimized the hysteria of the time and authorized the incarceration of tens of thousands of American citizens of Japanese ancestry.

What happened at Pearl Harbor (more than 2,400 Americans dead, 8 battleships damaged) is nothing like what happened at the San Bernardino office Christmas party (14 civilians dead, 21 injured).

Japan’s surprise attack mission is far different from two individuals acting alone–and at this point, that’s all we have; there’s no hard evidence linking the Farooks to orders from international terror groups. And even if there were, Japan is a full-fledged country. ISIL/ISIS/DAESH is exactly what President Obama called them the other night. “They are thugs and killers,” the president said. “Part of a cult of death.”

But the terror and the hysteria are real.

And that’s what the president was attempting to address. Now is not the time for a “blow them up to kingdom come/get the bastards” attitude.

Not that the president’s speech didn’t have its hawk talk. “The threat from terrorism is real, but we will overcome it,” said the president. “We will destroy ISIL and any other organization that tries to harm us. Our success won’t depend on tough talk or abandoning our values or giving into fear. That’s what groups like ISIL are hoping for. Instead, we will prevail by being strong and smart. Resilient and relentless. And by drawing upon every aspect of American power.”

It was far from a dovish speech. We’re not going to have new troops. Didn’t work for Bush, not going to work now. But the president did assure that the U.S. will continue to bomb away at Iraq and Syria with airstrikes–4,500 of them in Iraq last year. And the U.S. military will continue to work with allies like Turkey.

Remember San Bernardino wasn’t Pearl Harbor. And we’re not dealing with a nation. We’re dealing with “thugs” who want to bait us into a ground war that fuels the insurgency and helps recruit more terrorists.

So, of course, nothing the president could say would be enough. Not when all the GOP candidates want to rip off their shirts, flex their muscles and talk trash.

But all that whips up an irrational hysteria, of the type that Asian Americans saw two months after Pearl Harbor.

And that’s why the president’s speech was more of a reminder of our nation’s values. The stuff that makes America great. The stuff that brought people from both sides of the aisle in 1776 to declare independence from the King. We can summon all that up today, but it takes real courage to do the right thing.

And yet most pundits after the speech were critical of the president for a lack of new military action or tough guy strategy.

They couldn’t see that acting like America, standing united and not cowering in fear, can be a smart strategy that works.

“Let’s make sure we never forget what makes us exceptional,” the president said. “Let’s not forget that freedom is more powerful than fear.”

Less than 24 hours after the speech, we saw exactly why the president’s tack was far wiser than anyone in the mainstream media would care to say.

By minimizing the president’s calls for tolerance, it left a huge hole that Donald Trump was only happy to fill.

There he was fanning the flames of Islamophobia on Monday calling for the “total and complete shutdown of Muslims entering the United States.”

In an e-mail statement to media, Trump said: “[I]t is obvious to anybody the hatred is beyond comprehension…Where this hatred comes from and why, we will have to determine. Until we are able to determine and understand this problem and the dangerous threat it poses, our country cannot be the victims of horrendous attacks by people that believe only in Jihad, and have no sense of reason or respect for human life.”

Of course, we can see that Trump’s views come from a fundamental misreading of Islam. With Muslims, Trump will take the leap. You didn’t see him invoke Robert Dear Jr., the alleged Colorado Planned Parenthood shooter to stereotype and vilify all Bible-thumping whites, now did you?

But for Trump, and many Americans, there’s no hesitancy in believing this to be true: seen one Jihadist Muslim, and you’ve seen them all.

And with every incident, we get closer to internment camp fever.

Indeed, in response to all the criticism, Trump insists he’s only doing what Roosevelt did during World War II. So now it’s out there in the open.

It’s exactly what Obama’s speech was trying to calm, but it may be too late. Hysteria is well underway, fueling the terrorism we need to be worried about–the one at home that tears at our democracy.

Emil Guillermo is an award-winning journalist and commentator who writes from Northern California.