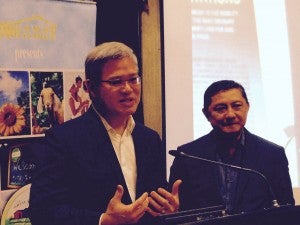 TORONTO, Ontario—The Canadian branch of a renowned anti-poverty organization in the Philippines unveiled a tripartite partnership for sustainable development at a recent meeting of donors and supporters.

Officials of Gawad Kalinga Canada (GKC) also gave an update on the organization’s Typhoon Haiyan rebuilding efforts and unveiled its partnership with Gawad Kalinga Philippines (GKP) and Cuso International, during a November 28 gathering at One King West Hotel.

“You are not only providing a roof over their heads, but you are providing hope for a new beginning, a new security, a new chance to restore their dreams for the future,” added Prospero. 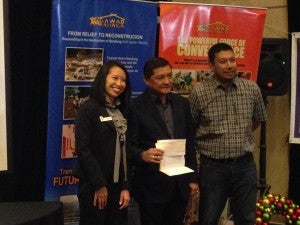 GKP executive director Luis Oquinena, visiting from the Philippines, spoke of communities regaining dignity and connections in spite of different divisive factors.  “It is good to work together, to create wider impact and disrupt the status quo,” he said.

“Our country is being shaped by climate and conflict.  We have to adapt to a new normal–a few weeks ago we had Typhoon Lando, and now we are experiencing drought.  We have to incorporate climate change in everything we do,” he added.

A video documenting the turnover of homes built by GKP and its partners to their new owners was shown. Happy residents voiced t thanks to the donors and the GK workers and added that now that they have homes, they would welcome livelihood projects that would help them feed themselves.

Oquinena related a trip he and some GKP team members made in January to Mamasapano in Mindanao after the massacre.  “There were close to a thousand displaced Muslim families in the evacuation center going hungry.  So we started to cook for them, and one evacuee said ‘We trust you because you care for us.’  The issue is about trust.” 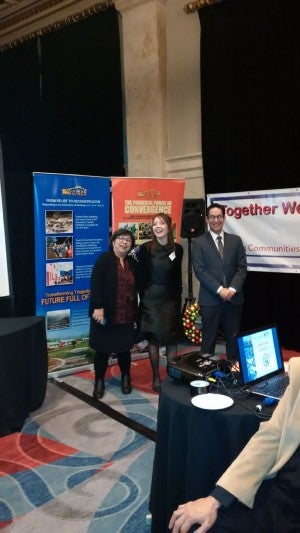 Oquinena continued: “Gawad Kalinga is a choice–the choice of the good we can create.  If I have a message for the Philippine community here, is to build on that trust, turn around and have a meaningful journey and demonstrate that we are indeed a nation.”

Cuso International, the third partner with GKC and GKP in the tripartite alliance, presented its approach through a video from Evelyn Guindon, CEO of Cuso, and a live message from Nefertiti Saleh, Cuso manager for Programs, Partners and Outreach.

Volunteer organization Cuso will partner with GKP and GKC through a recently launched program called The Voice, funded primarily by the government of Canada’s Department of Foreign Affairs and Trade and Development.  “Working together to build capacity of individuals, communities and organizations is the most effective way to reduce poverty,” shared Saleh.

Cuso places value in “investing in strategic alliances (valuing) the importance of getting members of the Filipino diaspora to give back to their country of heritage and to international development,” said Guindon.

The College of the Holy Spirit North America Foundation received a plaque of recognition for volunteer work with GKC.  Other volunteer awardees were Maripi Leynes, Odette Montelibano, and Cheryl Cantonjos.