Fil-Am poet to perform at climate change events in Paris 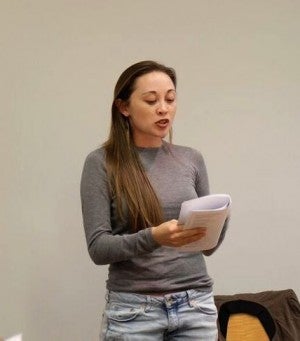 Filipino American Isabella Avila Borgeson was one of four winners of Global Call for Climate Action’s Spoken Word for the World contest.PHOTO BY MARIA TERESA OJEDA

SAN FRANCISCO–Filipino American poet Isabella Avila Borgeson of the San Francisco-Bay Area is one of four spoken word artists who have been chosen to perform at various events in conjunction with the 21st Conference of the Parties to the United Nations Framework Convention on Climate Change.

Since 1992, this global gathering has been trying to come up with a plan to reduce greenhouse gas emissions to prevent catastrophic impacts on the climate system. Negotiators at the 2011 confab had agreed to finalize a deal by the end of 2015. Despite the recent terrorist attacks in Paris, about 150 world leaders and 40,000 participants are expected to attend COP21, including President Barack Obama, who has called climate change one of the “top strategic threats” to the U.S.

Because this year’s gathering is pivotal in finally achieving the COP21’s goals, the Global Call for Climate Action organized a worldwide contest for spoken word artists who wanted to inspire and change the world through their poetry.

WATCH: Spoken Word for the World Video by Sil the Photographer and audio by Rizal Adanza

The GCCA is a coalition of over 400 nonprofit organizations from around the world aimed at mobilizing civil society and the public “to ensure a safe climate future for people and nature, promote the low-carbon transition of our economies, and accelerate the adaptation efforts in communities already affected by climate change.”

Last year, 26-year-old poet Kathy Jetnil-Kijiner from the Marshall Islands represented the voice of civil society and performed at the opening ceremony of the U.N. Climate Summit in New York. She delivered “Dear Matafele Peinam,” a moving poem dedicated to her seven-month-old daughter, to much acclaim. Her message alerted the world community of the dangers of her homeland going under water because of climate change.

GCCA’s Spoken Word for the World judges selected four winners representing communities from Australia, Guam, the Philippines and Samoa. Borgeson had submitted a video of “Yolanda Winds,” her winning piece. 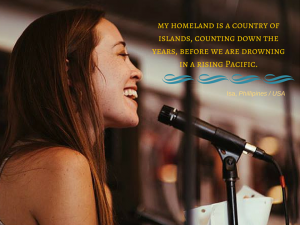 The performances of Isabella Borgeson and other poets are live-streamed as participants of Run for Your Life, a movement of indigenous communities calling attention to how climate change is impacting such communities throughout the world, arrive at the COP site. SPOKEN WORD FOR THE WORLD/ GLOBAL CALL FOR CLIMATE ACTION

She dedicated her poem to her mother, Geline Avila, a longtime community activist in the U.S. and survivor of super typhoon Yolanda/Haiyan, which has been called the strongest typhoon to make landfall in the recorded history of the world. Borgeson’s mother barely escaped with her life as Yolanda destroyed her ancestral home and thousands of other residences in Leyte and Samar, and other provinces on its path.

Borgeson will be performing her piece in Paris with the rest of the contest winners, Jetnil-Kijiner and other poets from different parts of the world. A graduate of U.C. Berkeley, Borgeson is a community curator for Adobe Systems, a multinational computer software company based in the Bay Area. Her job involves ensuring a safe space online for youths to share their voices on issues like climate change and police brutality and providing a platform for their art work, such as paintings, poems and short stories. 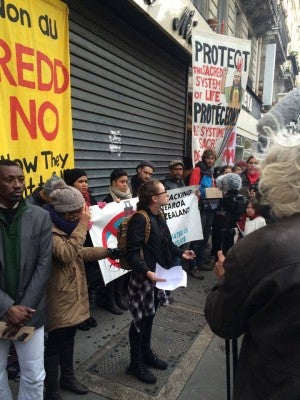 Isabella Borgeson (center) and other Spoken Word for the World poets (behind banner) were asked to perform at the “Human Chain” in support of the Indigenous people’s contingent. This action replaced the Climate Change March, which was cancelled due to a police protest.

The 24-year-old Fil-Am has competed nationally as a slam poet and spoken word artist and was awarded “Best Poem,” and her team ranked third in the nation, at the College Union Poetry Slam Invitational in 2013.

Borgeson, who is a 2015 Fellow for the Voices of the Nation Art Foundation national poetry workshop for writers of color at the University of Miami, views her poetry as an artistic extension of her activism and community organizing.

After super typhoon Yolanda hit her mother’s hometown in late 2013, Borgeson spent almost two years in Tanauan, Leyte, working as a community organizer on relief and rehabilitation projects for women and children.

Together with her mother, she spearheaded the rebuilding of an elementary school with the support of the Tala and Malaya Fund from the U.S. The mother and daughter team also worked with Akbayanihan, the Akbayan Citizens Party’s disaster relief and rehabilitation arm.

Upon her return to the U.S., she did presentations to different groups to increase awareness about the long-term recovery needed in Leyte and raise funds to help residents in finding alternative means of livelihood. 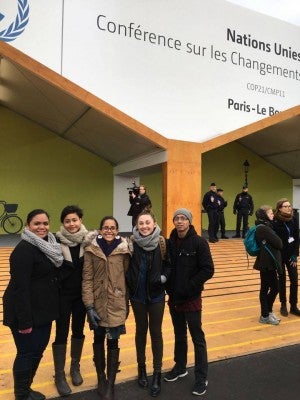 For Borgeson, her experience in Leyte remains indelible in her mind. She continues to advocate for survivors of Yolanda and organize around climate change. In her statement to the Spoken Word for the World competition, she states:

“Learning about my family’s stories of death and trauma surrounding the ocean was a vivid part of my experience. In my community/family/motherland, climate change means re-learning the ocean … The Ocean is now a mass grave of family members and townsfolk, whose bodies were washed away by storm surge waves during the super typhoon. This piece titled ‘Yolanda Winds’ is dedicated to my mother, a survivor of the super typhoon, who struggles to forgive the sea. A reminder that we are a people of the sea. And for some of our families, sharing our stories about climate change, typhoon seasons and rising oceans is an act of resistance, necessary for our survival.”