SSS President and CEO Emilio De Quiros Jr. was in the U.S. to inform Filipinos of improvements in the SSS program. INQUIRER FILE

LOS ANGELES – The top executive of the Philippine Social Security System (SSS) led an outreach session at the Philippine Consulate General in Los Angeles on Friday, November 20, to inform qualified overseas Filipinos (including immigrants and dual citizens) on how to enroll and pay money contributions into the SSS program while abroad.

SSS President and CEO Emilio De Quiros Jr., who conducted the briefing, also highlighted the improvements in SSS program operations and services. Similar briefings with overseas Filipinos were held in other cities.

“The program is very good [for the overseas Filipinos], and we continue to reach out the potential members who can get more funds depending on what benefits they will choose,” De Quiros told INQUIRER.net.

SSS provides benefits for the overseas Filipinos, such as retirement, disability, maternity, sickness and death.

De Quiroz reported that SSS membership (as of September 2015) has increased to 33.3 million in the Philippines. Meanwhile, 1,095,554 OFWs around the world have signed up for the program as well. 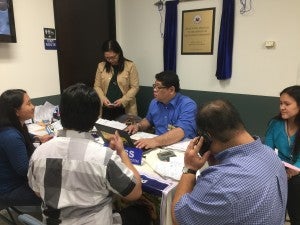 As of today, there are 22 SSS branch offices in 17 countries, including two offices in North America — Toronto, Canada and San Francisco to make services more flexible and accessible to overseas Filipinos.

De Quiros and his officials are in negotiation with Consul General Leo Herrera-Lim on having another SSS branch office in Los Angeles due to growing numbers of Filipinos living in the most populous city in the state of California.

To pay the contributions, there are three options: an OFW can pay the SSS insurance through his or her relatives in the Philippines, overseas e-payment (i.e. PNB, BDO or Lucky Money) or other conveyances (i.e., air mail).