Inspired by a Filipino film festival in San Francisco 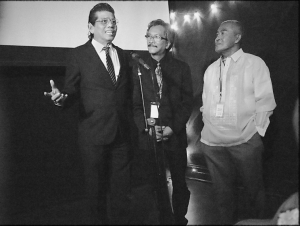 SAN FRANCISCO–A film showing can move one to action. One made me sign up to be an organizer for an annual Filipino American film festival. I was inspired after attending the Annual Filipino Arts & Cinema International Festival last year. Raymond Red’s “Manila Skies” made a strong impression on me.

It was the first time I saw a feature film expressing the stifling paradox of living in the Philippines with such acute and abstract imagery. The story had a recursive plot that left the audience thinking the ending was the beginning, mirroring a sentiment of Filipinos that their economic state has not changed and is not changing.

As a fellow filmmaker, I am always interested in finding new ways of telling stories that portray a message through “show” rather than “tell.” Red’s film alone left me with the impression that this festival had a critical eye and an intentional approach to presenting stories and revealing talents of the Filipino diaspora. So this year, I joined FACINE, the organizer of the 22nd Annual Filipino Arts & Cinema International Festival.

From Wednesday, October 21 to Friday, October 24, the festival was held at the Roxie Theatre in the Mission District of San Francisco. Fifteen films were screened over the four days and nights, ranging from stories of twisted love triangles to living as a transgender woman in Cebu and guerilla exploits during Martial Law to the traditional dances of the Mindanao Islands. More than 200 patrons filled the seats to take part in this unique experience. 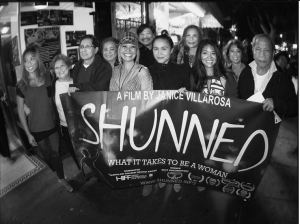 Janice Villarosa with family, friends and patrons; poster reads “Shunned,” the title of her film celebrating the lives of a trans women’s community in Cebu. PHOTO BY TONY REMINGTON

Each night felt like a reunion of old friends, bringing in artists and activists, many of whom were politically active in the 1970s and 1980s in the Philippines and the Bay Area. Left and right, patrons shared hugs, took selfies and introduced each other. The feeling was spirited and intimate, brimming with pride and ease.

The festival hosted several directors in person, including Elwood Perez, Cecilio Asuncion, Arnel Ramos Felix, Christopher Ad Castillo, Angelo Santos and Janice Villarosa who came from the Philippines and other parts of the United States.

Elwood Perez’s “Esoterika Maynila” opened the festival, drawing a full house. Volunteers had to commandeer extra chairs for the aisle in order to accommodate all patrons. Perez, who arrived from Manila, had family fly in for the opening from various corners of the United States, for which he expressed immense appreciation towards. He was also awarded the Gawad Gintong Ani Award for his lifetime of achievement in film. Another one of his films, “Otso,” was also screened during the festival.

Cinema One Originals, an annual film festival held in the Philippines, was awarded the Gawad Lingap Sining Award for its years of work, nurturing the arts.

As FACINE we targeted a wider audiences than previous years, with outreach to several community and state colleges in San Francisco, the East Bay, and the South Bay. Our members disseminated flyers in shopping malls frequented by the Filipino community. We also sought to attract younger audiences through our own networks and social media.

During the festival I had the opportunity to interview founder and director Mauro Tumbocon, who has dedicated 22 years to the success of this beloved event. I asked him what it is like to watch this festival grow. He saif it began in a small public library and remained there for more than ten years. After a few years of expanding it to community centers, they brought it to a “real” theatre.

“When you do it in a theatre it makes the festival or event more visible and there’s a greater awareness from the audience that something is going on. It’s been a hard climb,” shared Tumbocon.

He explained that in the beginning he was often asked, “Why an ethnic specific film festival?” He would exclaim, “Why not? I would like to see my face on the screen, even though we call it a multicultural America there is still a dominant image that holds.”

He explained that as new immigrant, he experienced feelings of alienation, “That’s how I realized that invisibility is very crucial to [framing] how you accept yourself, you know? And how are other people going to accept you if you cannot accept yourself?”

Tumbocon found cinema to be a good medium to make the community more visible to itself and the larger community. He believes it has enabled the community to become more involved, with the ability to accept itself as Filipinos in America. 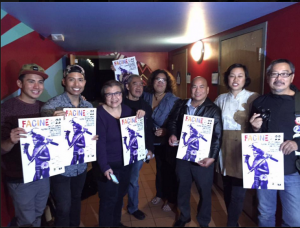 Tumbocon glowed as he shared how this festival originated as an expression of his passion for cinema and has grown into something greater than himself. Looking forward, FACINE would like to expand to other types of art events as there are limitations to a theatre space and an event that is site-specific.

This year’s festival event was co-sponsored by Pilipino American Artists and Writers (PAWA), the Film Development Council of the Philippines; media sponsors Manila Mail, The Filipino Channel and INQUIRER.net; with one community sponsor, the LGBT Center of San Francisco.