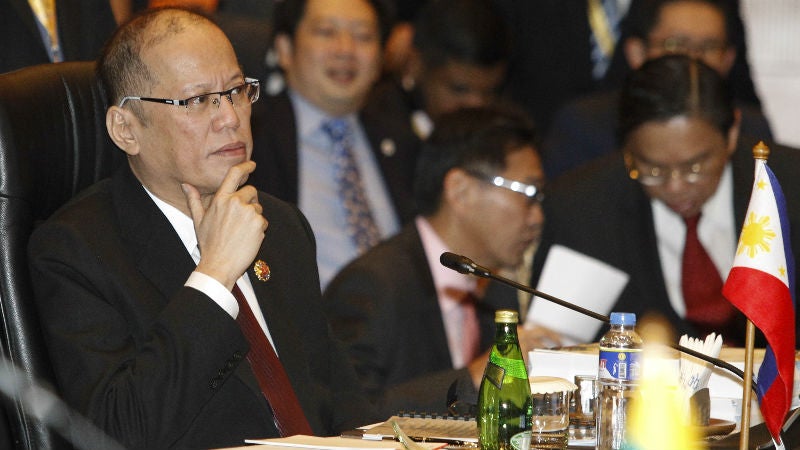 KUALA LUMPUR—Reserving his strongest words for last, President Aquino directly accused China of grabbing territory in the South China Sea at the close of his last East Asia summit on Sunday.

“It is regrettable that China continues to massively reclaim and build structures in the sea known by many names in total disregard of international law as well as the Declaration on the Conduct of Parties in the South China Sea,” he said at the 18-nation 10th East Asia Summit held back-to-back with the 27th Association of Southeast Asian Nations (Asean) Summit.

“Many countries have expressed serious concerns that these actions threaten freedom of navigation and unimpeded lawful commerce in one of the world’s most strategic waterways,” Mr. Aquino said.

He cited three instances during his term when Chinese vessels barred Philippine ships and fishing boats from the Philippines’ own maritime territory, including a standoff at Panatag Shoal (international name: Scarborough Shoal) off Zambales province in 2012.

“We had been asked not to make these incidents public and we agreed, in an effort to deescalate the situation,” Mr. Aquino said.

“The response, however, was even more incidents, to the point wherein we are now no longer allowed to enter areas within our exclusive economic zone,” he said.

China’s seizure of Panatag Shoal made the Philippines decide to go to the UN Permanent Court of Arbitration in The Hague and ask the tribunal to invalidate Beijing’s claim to almost all of the South China Sea.

The move angered China, which stepped up its land reclamation and artificial island building in the South China Sea, rattling the Philippines and other claimants to territory in the strategic waterway: Brunei, Malaysia, Vietnam and Taiwan.

China has also refused to take part in the arbitration, insisting it has “undisputed sovereignty” over the South China Sea.”

Throughout the Asean summit held here over the weekend, President Aquino denounced China’s massive land reclamation and artificial island building in the West Philippine Sea, part of the South China Sea within the Philippines’ 370-kilometer EEZ.

The United States, Japan and Vietnam also called on China to halt its land reclamation in the South China Sea.

“[On] my watch, a survey ship conducting studies arising from a service contract we awarded, was forced out of the Reed (Recto) Bank in an area [144 km] from the island of Palawan, which is thus clearly within our exclusive economic zone,” Mr. Aquino said, referring to the 2011 incident that forced the suspension of exploration in the area.

Referring to the 2012 standoff, he said: “Later, Chinese fishing boats were caught carrying species covered by the Convention on International Trade in Endangered Species, [216 km] from Masinloc, Zambales, again within our exclusive economic zone.”

“I have had to respond to fishermen in my country, complaining about how they can no longer fish in their traditional waters. They ask for explanations why they can no longer take shelter [on Panatag] Shoal during times of inclement whether,” he said.

“In a more recent incident, a [People’s Liberation Army Navy] frigate with Bow No. 571 allegedly accosted and challenged another survey ship conducting studies on a contract we awarded, about [54 to 72 km] from Palawan,” he said.

Mr. Aquino called on China to “honor its word” and respect the rule of law, referring to the arbitration case in The Hague.

But China said it would continue to build military and civilian facilities on its artificial islands in the South China Sea.

“Building and maintaining necessary military facilities, this is what is required for China’s national defense and for the protection of those islands and reefs,” Chinese Vice Foreign Minister Liu Zhenmin told reporters in Kuala Lumpur.