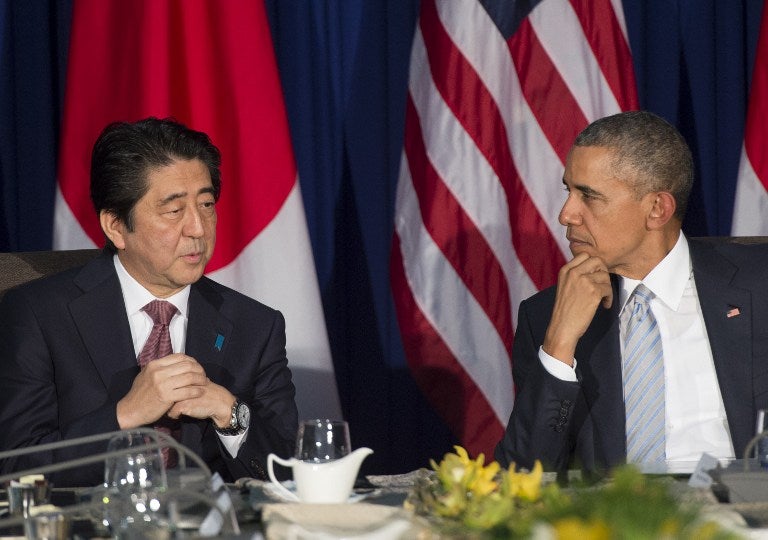 Japan on Sunday backed the United States sailing warships close to disputed land in the South China Sea but said it had no plans to send its own maritime forces to support the operation.

Chinese authorities monitored and warned away the vessel, but did not otherwise intervene, although Beijing later summoned the US ambassador and denounced what it called a threat to its sovereignty.

Reports last week said Japanese Prime Minister Shinzo Abe told US President Barack Obama on the sidelines of the APEC summit in Manila he would consider sending his country’s ships to back up American operations in the area.

“We have actively been trying to contribute to stability in the region but as far as we are concerned there is no plan to be a part of the freedom of navigation operation of the United States,” he said.

“At the US-Japan summit (in Manila), I believe Prime Minister Abe conveyed this stance to President Obama.”

Foreign Minister Fumio Kishida appeared less decisive, saying “nothing has been decided yet, no decision has been taken.”

“The international community must work in concert to respond to the situation,” he said, speaking immediately before Nakatani.

“For the US, conducting operations to ensure the freedom of navigation, this is strictly based on international law … and Japan is supporting the US in this regard.”

Tensions have mounted since China transformed reefs in the South China Sea into small islands capable of supporting military facilities, a move the US says threatens freedom of navigation in a region through which one-third of the world’s oil passes.

China insists on sovereignty over virtually all the resource-endowed South China Sea, which is also claimed in part by a handful of other countries.

Washington has repeatedly said it does not recognize the Chinese claims.

In a communique after the talks in Sydney, Japan and Australia called on “all claimants to halt large-scale land reclamation, construction, and use for military purposes” in the South China Sea.

They also “urged claimants to exercise restraint, take steps to ease tensions and refrain from provocative actions that could escalate tensions.”

Two-thirds of Australian trade passes through the South China Sea and Bishop said freedom of navigation in the area was imperative.

“We have a very deep national interest in maintaining peace and stability in that region,” she said.

“We don’t take sides on the competing territorial claims in the South China Sea, but we have acknowledged that land reclamation and construction activity that’s undertaken by China and other claimants raises tensions in the region.

“We’re particularly concerned at the prospect of militarization of artificial islands and structures.”